Skip to content
Please participate in our survey and help us improve the Audi MediaCenter. Thank you!
Go to survey
07/18/22
Neuburg a. d. Donau
Motorsport 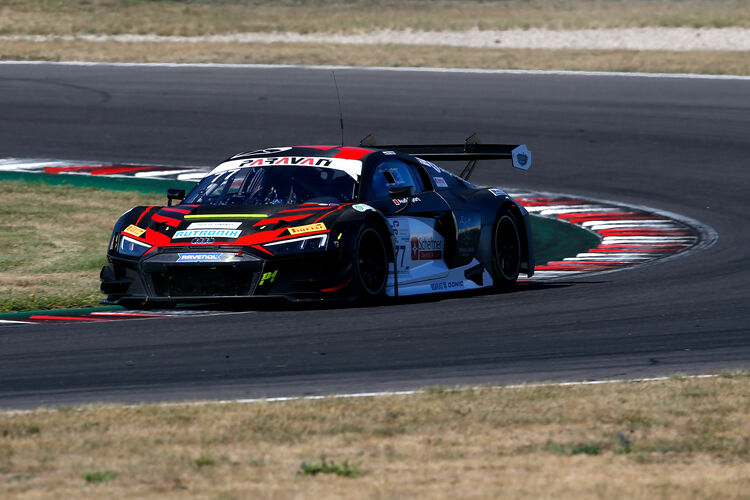 Audi customers undefeated again: In Germany’s popular GTC Race series for club racers, the customer teams of Audi Sport customer racing prevailed in all GT3 competitions on the second race weekend as well. Thierry Vermeulen won the GT60 endurance race at the Lausitzring in the Audi R8 LMS fielded by Car Collection Motorsport. After one hour of racing, the 19-year-old Dutchman had a seven-tenths of a second advantage over his pursuers in the Mercedes-AMG. Junior driver Finn Zulauf clinched third place together with Audi Sport driver Markus Winkelhock for Rutronik Racing. The driver duo shares first place in the Pro classification with Carrie Schreiner after two of five rounds. In the first sprint, the customers recorded a one-two-three: Robin Rogalski from Seyffarth Motorsport, who already showed his strength in the endurance race and only retired due to an attack by an opponent, crossed the finish line 57 hundredths of a second ahead of Thierry Vermeulen, followed by Finn Zulauf. In the second sprint Rutronik Racing managed a one-two. Audi Sport driver Luca Engstler won by 2.4 seconds ahead of Markus Winkelhock after 21 laps. Zulauf and Winkelhock are second in the overall standings and Winkelhock also leads the Pro classification.

Victory for Audi R8 LMS GT3 evo II on China debut: The Uno Racing Team experienced a season opener in the GT Super Sprint Challenge that was tailor-made. At the season opener of the Chinese race series at Ningbo, the team’s rookie driver, who competes under the pseudonym Rio, prevailed by 2.1 seconds in the first sprint. In the first two laps in particular, he fought fierce battles for position with his pursuers. For the second evolution of the Audi R8 LMS, just like for the team and the driver, it was the first appearance on this race track 200 kilometers south of Shanghai. In the second sprint, Rio clinched another trophy as the runner-up. He now leads the Audi Sport Asia Trophy for privateer drivers ahead of David Pun.

1-2 victory in Lithuania: Two Audi R8 LMS cars dominated the Aurum 1006 endurance race in Lithuania. The Circle K Lesta Racing Team won the competition on the Palanga track with the driver quartet Julius Adomavičius/Ignas Gelžinis/Marijus Mazuch/Eimantas Navikauskas. After 373 laps, the Circle K miles Plus Racing team with drivers Ralf Aron/Paul Aron/Paul August/Oskaras Brazaitis in another Audi followed in second place, 26.7 seconds behind. Team Juta Racing was the entry team that prepared and supported the two GT3 sports cars. Over the course of 8 hours and 20 minutes of racing, the lead had changed between three brands a total of 19 times.

Second win of the season in Belgium: Team PK Carsport won the third round of the Belcar Endurance Championship. Peter Guelinckx, Bert Longin and Stienes Longin shared the Belgian squad’s Audi R8 LMS GT2 on the Spa circuit. In a mixed sports and touring car field, the three Belgians established a lead of 23.2 seconds over the course of 50 laps. After the opening victory in Zolder in May, it was already the second win of the season for Anthony Kumpen’s team in Belgian endurance racing. In addition, the most successful team from the circle of Audi GT2 customers also leads the Pro-Am classification of the GT2 European Series at the season’s halfway point.

Success in German grassroots racing: Lars Ellmar-Kiehn won his class in the Audi R8 LMS GT4 in both sprint races on the fourth race weekend of the North German ADAC Börde Tourenwagen Cup at the Lausitzring. Together with Tobias Erdmann, he also managed overall victory in the two-hour endurance race for Seyffarth Motorsport at the same event.

Two second places in China: Vincent Lin clinched two trophies at the season opener of the GT Super Sprint Challenge. On his debut in the cockpit of Absolute Racing’s Audi R8 LMS GT4 at the Ningbo circuit, the Chinese clinched second place in class in a field of five competitors.

1-2 victory in the USA: In the IMSA Michelin Pilot Challenge, the Audi customer teams celebrated the first one-two of the season in a thrilling seventh race of the season at Lime Rock Park. Chris Miller, who eventually won together with Mikey Taylor, was initially in third place when an opponent attacked his Audi RS 3 LMS. Miller fell back to the end. After a quick pit stop by the Unitronic JDC-Miller MotorSports team, Mikey Taylor took over his teammate’s car and passed opponent after opponent in his race to catch up. Even in the closing stages of the two-hour race, the top five contenders were within one second of each other. Miller/Taylor’s Audi RS 3 LMS survived tough maneuvers and contact by an opposing Hyundai unscathed and ultimately crossed the finish line 1.1 seconds ahead. Second place went to Preston Brown and Denis Dupont in an Audi of the Belgard & Techniseal Racing team.

Success in Canada: Richard Boake celebrated TCR victory in the Audi RS 3 LMS at the third event of the Sports Car Championship Canada. In the first race at Toronto, he had an advantage of 0.121 seconds over brand colleague Jerimy Daniel after 40 minutes. Jean-François Hevey completed an Audi one-two-three. An accident involving several race cars led to the abandonment of the second race. The race organizers are initially evaluating all available data, videos and reports before publishing a result in the next few days.

Class successes in Polish club racing: Jakub Franek again dominated his class at the third round of the Polish racing series Wyścigowe Samochodowe Mistrzostwa Polski. On the Poznań circuit, the privateer won both sprints and the endurance race in his Audi RS 3 LMS.

Best result of the season for Denis Babuin in Italy: On the fourth race weekend of the TCR Italy, Denis Babuin achieved his best result of the season so far. The Italian, who started from third place, finished the second sprint in second place, just 1.1 seconds behind the leader, and thus improved from eighth to fourth in the standings. Nevertheless, he was not happy: Babuin had been leading the race confidently until the eleventh of 15 laps when he made a mistake. He stepped off the accelerator pedal when he thought the double waved yellow flag marked not only a local danger zone but the start of a safety car phase. As a result, Hyundai drivers Niels Langeveld and Kevin Ceccon passed him. As Ceccon subsequently received a penalty, Babuin still moved up to second position.