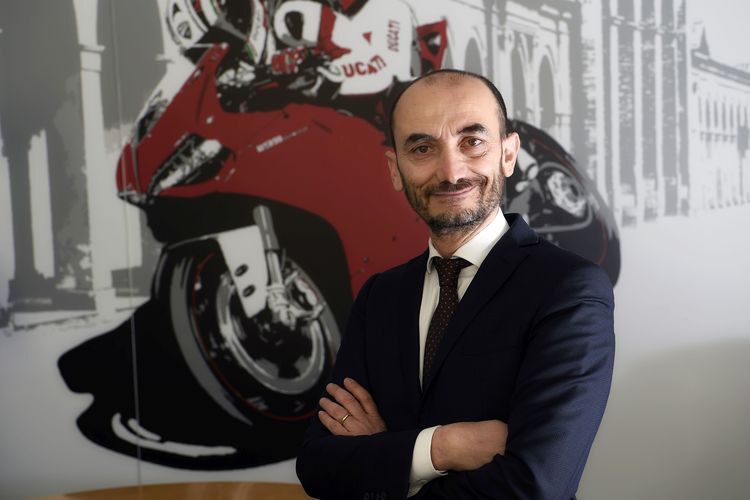 Claudio Domenicali (born in 1965) gained his degree in mechanical engineering at the University of Bologna in 1991 and straight away joined Ducati as the Supermono Project Manager. As a young engineer, he was in charge of the development of this single-cylinder racing bike, only 67 of which were produced and which has become an authentic cult item for Ducatisti and motorcyclists from all over the world.

In 1994 he became the Ducati Design Department Manager, coordinating the engine and vehicle designers for the definition of new products and three years later he took on the role of Deputy Technical Manager at the company. Domenicali, who's a great fan of racing, was appointed as CEO of Ducati Corse, the racing division of Ducati, in 1999, the same year it was created. Under his leadership, Ducati has won numerous Superbike titles and joined the MotoGP championship in 2003, winning the title of world champion in 2007 with the Australian rider Casey Stoner.

Whilst maintaining his responsibilities as CEO of Ducati Corse, Claudio Domenicali also took on the role of product R&D manager in 2005 and, the following year, was appointed Product and Product Development General Manager. Thanks to his experience and skills gained, Domenicali played an important role in the reorganisation and relaunch of the company, adding Quality of Operations Control tasks (purchasing, logistics, production and general services) to the role of Product Manager. The total number of staff under this position is approximately 750, added to the 100 or so employees of Ducati Corse, which in the meantime has become a division of Ducati Motor Holding rather than a company in its own right.

In 2009 Domenicali, still in the role of Product and Product Development General Manager, was invited to join the board of directors at Ducati Motor Holding and in 2012, following the company's acquisition by the Audi group, his position in both roles was confirmed. In 2013, thanks to his managerial talents, in-depth knowledge of the company and passion for Ducati motorcycles (which still today he likes to test personally before their launch onto the market) he was appointed CEO of Ducati Motor Holding.