Awards for Audi
from September to November 2017 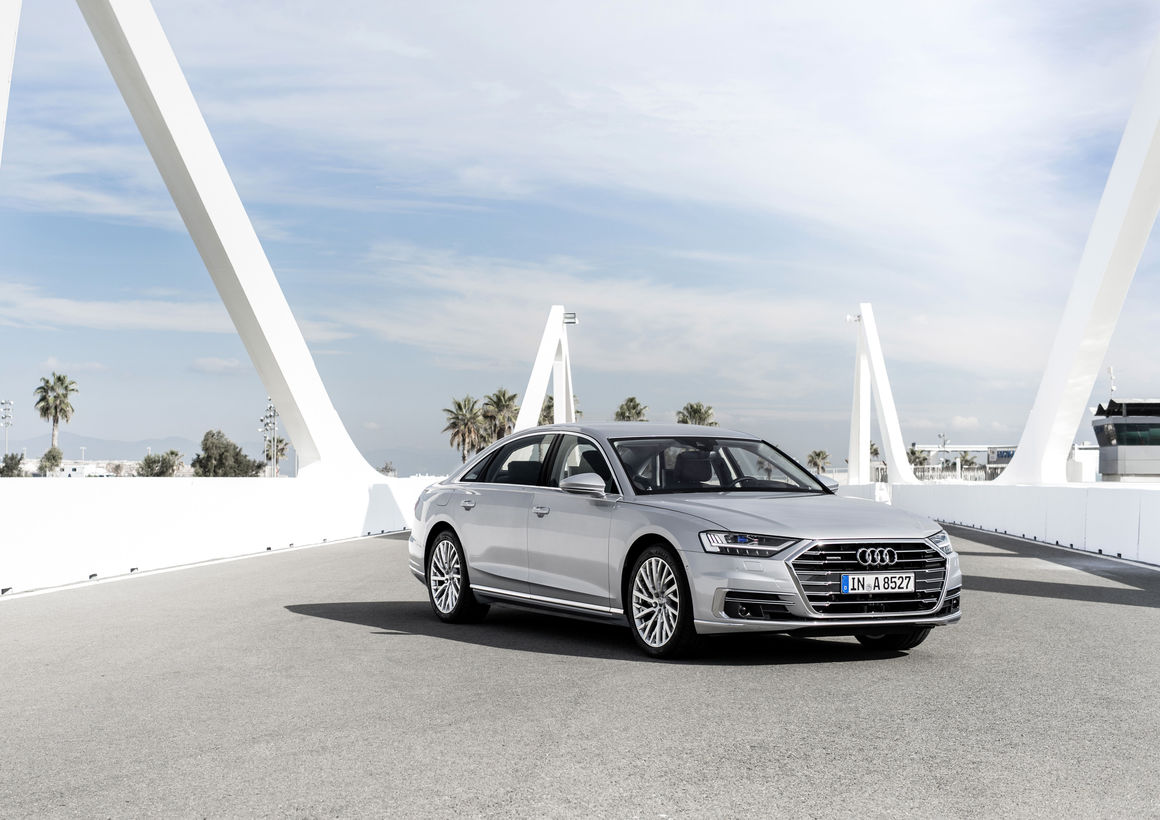 “Executive Station Wagon 2017”: Audi A6 Avant most popular luxury class model
For the fourth consecutive time, Audi and its A6 Avant (combined fuel consumption in l/100 km: 9.6 - 4.4*; combined CO2 emissions in g/km: 224 - 114*) have topped the “luxury class” category in the “Executive Station Wagon 2017” competition. More than 1,200 readers of “Deutsche Handwerks Zeitung” and “handwerk magazin” submitted their votes. The award is presented every other year and reflects the opinions of business owners in skilled crafts and trades. The prize was accepted by Ralf Weichselbaum, Head of Key Account Sales at Audi, at the International Motor Show in Frankfurt on September 15. “This is the best evidence that we are effectively fulfilling the needs of our customers. We want to further extend our competitive edge with the new A6, which we will present next year,” Weichselbaum said.
(September 2017)

“Eurostar 2017”: Alejandro Vukotich honored
Automotive News Europe has honored Alejandro Vukotich, Head of Automated Driving Development at Audi, with the “Eurostar 2017”. The automotive trade magazine recognized the 46-year-old for the Audi AI traffic jam pilot. With this, the brand with the four rings takes the lead in autonomous driving. The new Audi A8 is the first production car in the world developed for conditional automated driving at Level 3. On highways and multi-lane expressways with a physical barrier, the Audi AI traffic jam pilot handles driving in slow-moving traffic up to 60 km/h (37.3 mph). It handles starting from a stop, accelerating, steering and braking in its lane. If the driver activates the system, and if current national regulations allow it, the driver can turn his or her attention to other activities that are supported by the on-board infotainment system. Behind the Audi AI traffic jam pilot are innovative technologies, including the new sensor set with a laser scanner and the central driver assistance controller. Alejandro Vukotich joined Audi in 1999 and began his career as a developer of driver assistance systems. He has been responsible for their use across model lines since 2009. He has been Head of Automated Driving Development since the start of 2017.
(September 2017)

“Family Car of the Year 2017”: award for the Audi Q5
What do parents and kids especially prize in a family car? What is important? What can be eliminated? What is the maximum acceptable purchase price? The “Family Car of the Year 2017” study from the magazines “AUTOStraßenverkehr” and “Leben & erziehen” offered detailed answers to these and other questions. A total of 18,270 readers selected their favorite models in seven different price categories. The Audi Q5 easily took top honors in the “35,000 to 40,000 euros” category with 30.9 percent of the votes. Voters could select from a total of 152 station wagons, vans and SUVs. For the overwhelming majority of respondents, roominess was the most important purchase criterion. A large luggage compartment topped the wish list for 89 percent of the respondents; 78 percent said generous interior space was crucial in their purchasing decision. Among readers who were planning to buy a new car, the SUV held a clear lead with 31 percent. Station wagons and vans were each named by 23 percent.
(September 2017)

“Connectivity Award 2017”: double win for Audi
For the fourth time, readers of “auto motor und sport” and “Chip” computer magazine have selected their favorite technology relating to the connected car. More than 16,000 participants selected the best systems in 11 categories. Audi received two prizes – one for the Bang & Olufsen sound system with 14 loudspeakers, 705 watts and acoustic adaptation to background noise; and secondly, the innovation prize for the Audi AI traffic jam pilot in the new A8. The fourth generation of the luxury sedan is the first car in the world to enable conditional automated driving at Level 3 and, in specific situations, assumes the task of driving. While the traffic jam pilot starts, accelerates, steers and brakes, the driver can – depending on national regulations – watch a film on the 10.1-inch display in the center console, answer e-mails, write text messages, update their appointment calendar or read the news – a big relief in a traffic jam. In addition, Audi achieved second place with its voice recognition system in the “telephone integration” category, with the Audi connect SIM in the “entertainment/multimedia” category, with the predictive adaptive cruise control in the “convenience assistance systems” category, and with Audi pre sense city in the “safety assistance systems” category.
(September 2017)

“Golden Classic Car 2017”: first place for the NSU Ro 80
Readers of the trade magazine “Auto Bild Klassik” have spoken: In the voting for the “Golden Classic Car” awards, Audi has won first prize in the “sedan” category with the Ro 80 model of its former brand NSU. The luxury model had a clear lead with 33.6 percent of the votes. The NSU Ro 80 debuted in 1967 at the International Motor Show in Frankfurt. That same year it became the first German automobile to be named “Car of the Year” by an international jury.

The Ro 80 set new standards in road handling, comfort, safety and performance. The futuristic, wedge-shaped lines of its body are still considered a milestone in automobile design even today. The model was produced from 1967 to 1977 in Neckarsulm. During this time, a total of 37,406 units rolled off the assembly line.
(October 2017)

“Annual Multimedia Award 2018”: Audi receives four prizes
The “Annual Multimedia Award” has been honoring digital projects with gold or silver since 1996. It highlights the trends in digital marketing as well as in multimedia design. Audi won silver in the “special digital formats” category with the virtual exhibit – the highest accolade in this category this year. HoloLens data glasses make it possible to experience technology at a whole new level. Complex situations can be shown directly on the car and explained using 3D animation that appears in the user’s field of vision. Silver also went to Audi magazine in the “website” category and the Audi Sport “Rodeo” brand book in the “web TV/video” category. Gold was awarded to the “Tool” Audi Design Manual – From monologue to dialogue.
(October 2017)

Business Insider: Audi MMI – virtual cockpit is the “Infotainment System of the Year 2017”
For the second time, Audi has been granted the “Infotainment System of the Year” title by Business Insider. The Audi MMI system impresses with a diverse range of audio functions, precise navigation via Google Maps, Bluetooth integration, Audi Connect 4G LTE connection and a wealth of apps. Also decisive for the win were the voice controls, which experts call state-of-the-art, and the intuitive as well as safe operation while driving. Many functions can be controlled with the multifunction steering wheel, along with the views in the Audi virtual cockpit. It transforms the analog instrument cluster intoadigital screenthat adapts to the customer’s wishes and needs. The driver can select between the traditional display and the infotainment mode. The navigation maps or telephone, radio and audio lists dominate here within a large window between the two round dials. The S models also have a sport mode, in which the tachometer is located at the center. The Audi virtual cockpit is available in many Audi models.
(November 2017)

ROBB REPORT LUXURY AWARD: Audi A8 wins in the “best production sedan” category
The German edition of ROBB REPORT magazine has awarded its first-ever “LUXURY AWARD 2018” for the best luxury car of the year. The prize for the “best production sedan” went to the Audi A8. Its combination of materials, design and innovative solutions won over the independent, international jury: “In a digital world in which time is becoming more and more of a luxury, autonomous mobility gives you a time advantage.” The experts praised the Audi AI traffic jam pilot for this reason. While the system does the driving, the driver can carry out other practical activities and use his or her time sensibly. A total of twelve awards were presented in six categories, including ten for new luxury cars and two to classic automobiles.
(November 2017)

Showered with international awards: multiple prizes in Australia and Brazil
Audi has received the “Car of the Year” car sales award in Australia for the Audi Q5 in the “best SUV over AU$50,000” category. The Audi A4 is the “best prestige car under AU$100,000.” The Audi Q7 won the Australian “Drive Car of the Year” competition in the “best luxury SUV over AU$80,000” class. The Audi A5 Sportback (combined fuel consumption in l/100 km: 7.7 - 4.1*; combined CO2 emissions in g/km:174 - 106*) won two prizes in Brazil: “Best imported car of Latin America” in the Americar Awards and “Best imported car” in the Car Awards Brazil 2018.
(November 2017)

“10Best Car of the Year” Audi RS 3 Sedan
Car and Driver honored the Audi RS 3 Sedan (combined fuel consumption in l/100 km: 8.4 - 8.3*; combined CO2 emissions in g/km: 191 - 188*) with the “10Best Car of the Year” award at the Los Angeles Auto Show. The experts praised the car’s outstanding performance and powerful design combined with its high functionality. The Audi RS 3 Sedan is powered by a 2.5 TFSI engine with a power output of 294 kW (400 hp). The compact RS model sprints from 0 to 100 km/h (62.1 mph) in 4.1 seconds. The unique sound of the five-cylinder unit intensifies an already emotionally charged driving experience.
(November 2017)

Press releases on other awards are available in the Audi MediaCenter: