Awards for Audi since May 2019 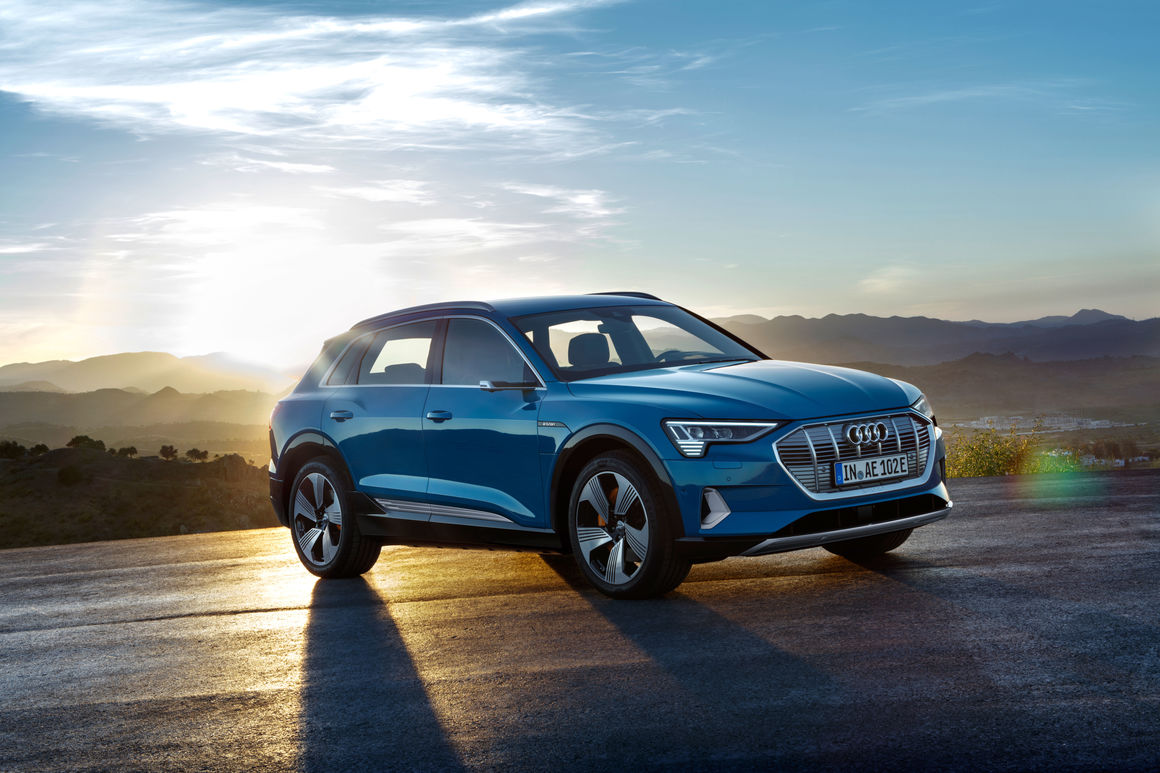 The Audi e-tron has earned the maximum five-star rating in the Euro-NCAP, the leading European program for evaluating the safety of passenger cars. The Audi e-tron achieved excellent scores in the tests for protection of adults, for frontal collision and for the emergency braking system, which reacted very safely to other vehicles, cyclists and pedestrians. The e-tron is the third Audi to achieve five stars in the current Euro-NCAP 2018/19 rating cycle. The A6 and Q3 have already obtained the top rating.
(May 2019)

Audi cars are tops at retaining their value on the German market, according to a study by the trade magazine Auto Bild for its 2019 “Wertmeister” (Value Champion) rankings. The brand with the four rings won four of the 13 vehicle classes in the rankings – more than any of its competitors. The e-tron 55 quattro** came out on top in the electric vehicle category with a residual value of 58.7 percent. The A1 40 TFSI Sportback** won the subcompact car category with 63.3 percent, while the Q2 40 TFSI quattro** won the compact SUV category with 59.6 percent. The A6 Avant 50 TDI quattro** topped the full-size class with a residual value of 49.8 percent.

The Auto Bild editorial team analyzed the German used car market together with the market observation company Schwacke for this year’s edition of the “Wertmeister” survey. Schwacke evaluates the prices of around 50,000 passenger car models and variants based on a full 1.7 million monthly market observations. The “Wertmeister” ranking shows the residual value of the individual models after a period of possession of four years, with various mileages assumed in the 13 vehicle classes. Referencing the new price – with defined optional equipment – results in a percentage value that determines the placement. For new models, a forecast is incorporated into the rating.
(May 2019)

Company car: Audi the most successful brand in award competition

Audi won the “Company Car of the Year 2019” title this year in six of 15 categories. This made the four rings the most successful brand in the award competition from the trade magazine firmenauto. Audi secured the title in the compact class with the A3, in the midsize class with the A4 (together with the VW Passat), in the midsize luxury class with the A6 and in the “compact SUV segment up to 4.50 meters in length” segment with the Q3. The Audi e-tron took first place both in the “newcomer” category and in the electric car category.

The trade magazine firmenauto has been awarding the “Company Car of the Year” prize since 1999. This year the best company cars were selected for the first time by a jury of experts. They consisted of 137 fleet managers, 15 fleet managers for independent fleets and financial service providers, and the chief editors of European fleet media.
(June 2019)

Readers of the German trade magazine Auto Zeitung have chosen the Audi e-tron as the best electric SUV. This was their decision in the e-Mobility Award – a reader survey held for the first time in 2019 to replace the Green Mobility Trophy. Models with hybrid and plug-in hybrid drive were available to choose from in three categories, with purely electrically powered cars in two classes. The e-tron 55 quattro won in the electrical SUV category with 17.9 percent of the votes.
(June 2019)

Audi e-gas Betreibergesellschaft mbH from Ingolstadt has made the cut in the “TOP 100” innovation competition. This competition evaluates the innovation management of midsized companies on the basis of a scientific system. The Audi company was especially impressive in the “open innovation/external orientation” category and with its successful innovation.

Audi e-gas Betreibergesellschaft mbH works together with specialists to study how energy from renewable sources can be intelligently used, stored and fed into the grid. Its power-to-gas plant in Werlte, Germany, is the world’s first industrial-scale plant to generate sustainable fuel from water and carbon using renewable electricity. It produces around 1,000 metric tons of e-gas and binds around 2,800 metric tons of carbon each year – as much as a forest with more than 220,000 beech trees absorbs each year. Audi e-gas, which is chemically identical to fossil methane, is being distributed to German filling stations via the gas network.
(June 2019)

Audi is the most innovative premium brand in the field of alternative drive systems. This was the finding of the Center of Automotive Management (CAM) and the consulting firm PwC, which each year prepare an innovation study entitled “Automotive Innovation Awards”. Audi took second place in the overall ranking as the “most innovative premium brand” and in the “autonomous driving and safety” and “interface and networking” categories.

The CAM, based in Bergisch Gladbach, has been evaluating the innovations of global automobile manufacturers since 2005 under the leadership of Prof. Dr. Stefan Bratzel. For 2018/19, a total 1,329 innovative products from 30 international automotive groups with around 90 markets were rated according to quantitative and qualitative criteria.
(June 2019)

The Audi Communications department was awarded gold at the Questar Award (USA) for its “Virtual Exhibits” communication format. It offers participants the opportunity to use Hololens mixed-reality glasses to explore technical objects at press events. The Questar Award, which has been presented for more than 25 years, is an international prize for video communication. Other large German companies took part in this year’s competition alongside Audi.
(July 2019)

Spain: two reader-survey victories for the Audi Q8 and the Audi e-tron

The Spanish magazine Ecomotor, a supplemental publication of the business magazine El Economista, has honored the Audi Q8 the best European premium SUV. The award was based on an online reader survey. The award for “best sustainable electric car,” which the Audi e-tron received from the lifestyle magazine MujerHoy, was also based on online voting.
(June 2019)

Audi is the best premium brand in Tunisia. This was the result of a reader survey conducted jointly by Tunisie auto magazine and the energy company Ola Energy. The brand with the four rings garnered 27.8 percent of the votes.
(May 2019)

The collective fuel consumption values of all models named above: