Awards for Audi in October and November 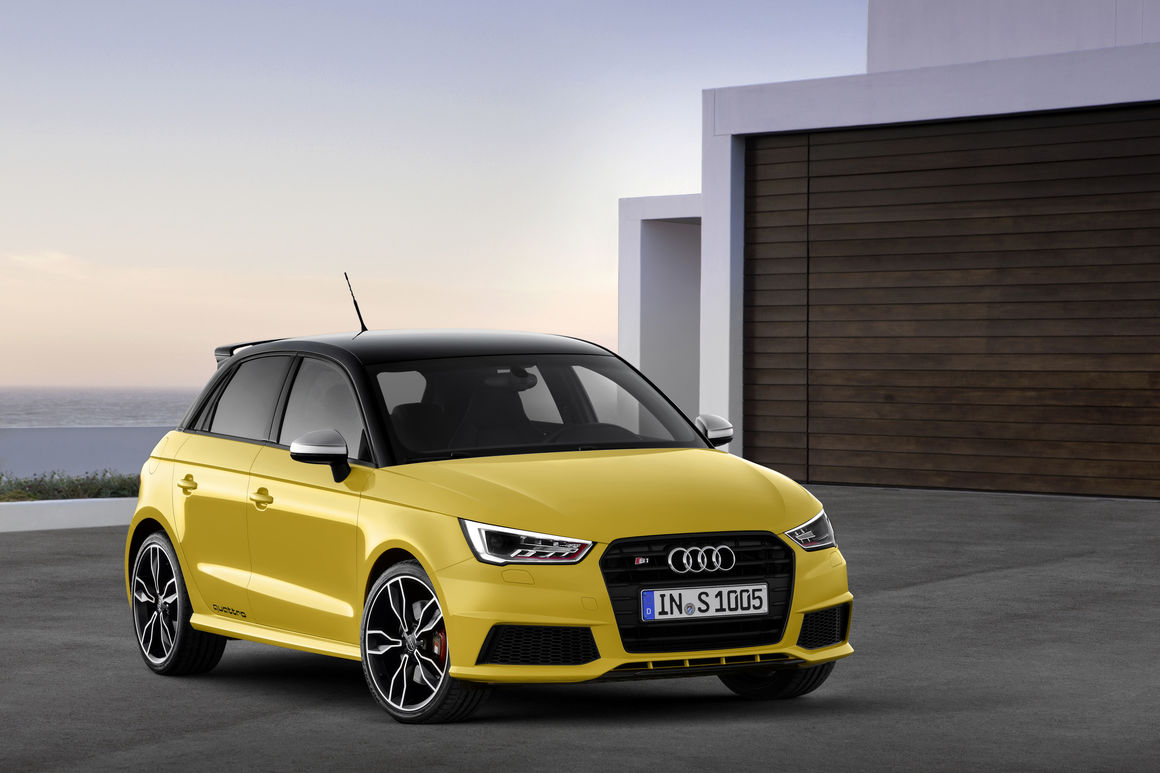 Sports cars of the year 2014: first place awards for Audi S1* and Audi RS 4 Avant*
Top performance: In the “Sports Cars of the Year” readers poll sponsored by “Auto Bild” magazine, Audi scored a dual victory. The brand with the four rings impressed with the power of the Audi S1 and the Audi RS 4 Avant. The two automobiles with quattro drive took first place in their respective market segments. The Audi S1 won in the “Compact Production Models” category with 51 percent of reader votes. The Audi RS 4 Avant took first place in the “Station Wagons Production Models” category with 49 percent of the votes. (November 28, 2014)

Audi e‑gas project wins innovation prize
Audi received the “Innovation prize: Auto Environmental List” from the Swiss automobile club (VCS) for its e‑gas technology. In explaining its choice, the award selection panel noted how the Audi e‑gas project transcends the automobile industry. It demonstrates how large amounts of green electricity can be stored efficiently and independently of location by transforming it into methane gas and storing it in the natural gas distribution network. (November 21, 2014)

International “Auto Trophy”: six victories for Audi
Six trophies for Audi: At this year’s “Auto Trophy” awards, the four rings were more successful than any other brand. Audi won the title of “Best Brand Worldwide” and “Best Design Worldwide” as well as the “Quality Trophy” for the quality and reliability of the Audi A1. Cars taking first place in their categories were the Audi A1*, A3* and A6*. A total of 75,810 readers of Autozeitung and its sister publications took part in the survey, which was conducted internationally for the first time in ten countries. (November 18, 2014)

Handelsblatt “Brand of the Year 2014”: Audi is most popular premium brand
Audi is the favorite premium car brand on the German car market. That was the finding of the German publication Handelsblatt online and the YouGov opinion research institute in a joint survey conducted for “Brand of the Year 2014”. In the field of all automobile manufacturers, Audi took second place behind Volkswagen. Those surveyed could choose from 630 brands in 23 different areas. (November 11, 2014)

Great Austrian automotive prize: award for Audi virtual cockpit
The Audi virtual cockpit was a winner in the “Safety and innovations” category of the “Great Austrian Automobile Prize”. The new display and control system is the connectivity highlight in the new Audi TT*. It combines the instrument cluster and the MMI screen into one central digital unit, and it is setting new standards with dynamic animations and precise graphics. The Austrian automobile club (ARBÖ) presented the “Great Austrian Automobile Prize” for the 31st time this year. A 61‑person award selection committee chose the winners. (November 7, 2014)

Audi excels in TÜV Report 2015
Top placings for Audi in the TÜV Report 2015: The Audi A3* was voted best in the class of compact cars. The Audi A6 finished second overall in the reliability rankings. The analysis takes into account the results of 8.5 million technical inspections conducted by the German TÜV association on 226 models. Since its inception in 1971, the TÜV Report has served as a popular consumer guide for people buying used cars. (November 6, 2014)

Audi Brussels wins “HR Ambassador Award”
Audi Brussels has received the “HR Ambassador of the Year” award for extraordinary development efforts in the area of Human Resources. The prize was awarded by a committee of HR representatives from trade associations, colleges and trade publications. (October 31, 2014)

Audi Korea recognized for its marketing strategy
At the “Chosun Ilbo Advertising Awards” Audi Korea won in the “Best Marketing” category. The award was initiated by the Korean daily newspaper “Chosun Ilbo”. (October 23, 2014)

Award for Audi A7* in the USA
The Audi A7 was overall winner in the “Total Value Index” study conducted in the USA by the consulting firm “Strategic Vision”. The car also took first place in the “Luxury Car” category. The Audi Q5* and Audi Q7* also won in their categories. (October 14, 2014)

The four rings strengthen their brand value
The “Best Global Brands” rankings show that the four rings have further strengthened their image. With the second highest growth rate of all brands (+27 percent), Audi increased its brand value to 9.8 billion US dollars and confirmed its position as one of the most valuable brands in the world. Once every year, the “Best Global Brands” study by the consulting firm Interbrand releases a ranking list of the one hundred most valuable brands. (October 9, 2014)

Audi A6 is “Family car of the year”
In the “Family car of the year” readers poll of the German magazines “AutoStraßenverkehr” and “Eltern”, Audi won first place with its A6 Avant. The full‑size model tool first place in the price category up to 40,000 euros. The A6 Avant achieved the third best results of all 155 candidate models with 23.9 percent of the vote. (October 8, 2014)

Audi recognized for its corporate responsibility
Audi has received the FASPE Ethical Leadership Award for corporate responsibility and ethical behavior. Above all, the award selection panel highlighted the company’s sustainable environmental policies and its efforts to reappraise the role of the Auto Union under National Socialism. FASPE is an international program initiated under the auspices of the Museum of Jewish Heritage in New York, which is intensively involved in dialog on ethical issues today. This FASPE Ethical Leadership Award was presented for the first time this year. (October 6, 2014)