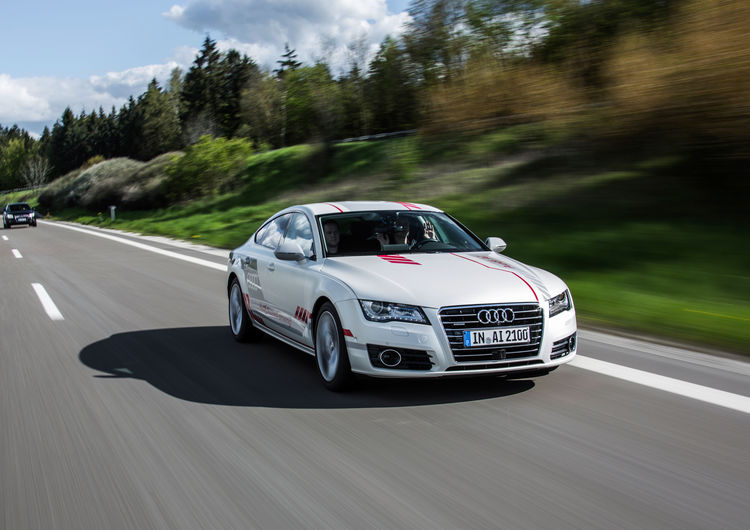 Audi once again confirms its leading role in the field of piloted driving. Its latest research car, the Audi A7 piloted driving concept “Jack,” has not only learned how to autonomously perform all of its driving maneuvers on the expressway. Above all, it has learned how to show consideration for other road users. “Jack” exhibits a driving style that is adaptive to the given situation, safe and especially interactive – a research car with social competence.

Audi is continually advancing the development of its piloted driving test car. “Jack” – the internal nickname for the Audi A7 piloted driving concept technology platform – is now driving more naturally. This is illustrated by the way it confidently deals with hazardous points on the road. “Jack” now passes trucks with a slightly wider lateral gap. It also signals upcoming lane changes by activating the turn signal and moving closer to the lane marking first – just like human drivers would do to indicate their intentions.

The cooperative attitude of “Jack” is especially apparent when other vehicles want to merge into the lane, such as on an expressway. Here the test car decides – based on the selected driving profile – whether to accelerate or brake, depending on which is best suited to handling the traffic situation harmoniously for all road users. Another new feature: Upon request, the navigation system can compute a route with the largest proportion of piloted driving sections.

The super brain of piloted driving is the central driver assistance controller, or zFAS. It uses state-of-the-art, high-performance processors to evaluate the signals from all sensors in real-time and create a model of the car’s surroundings. This model represents the prevailing traffic situation as accurately as possible. It lets the zFAS calculate upcoming maneuvers in advance, taking a look into the future, so to speak.

Audi continues to document its progress in piloted driving with spectacular events. In the United States, for instance, a driverless Audi TTS etched the brand’s four rings trademark into the surface of a salt flat and also conquered the legendary hill climb up Pikes Peak in the Rocky Mountains without a driver. At the Hockenheim Motodrome, a driverless Audi RS 7 Sportback chased down the limits of driving physics in fall 2014. Since then, Audi has been demonstrating the next steps in piloted driving on public roads too, for example under real traffic conditions on American highways from the west coast to Las Vegas.

The future is networked – this is especially applicable to piloted driving. In the future, cars and the infrastructure will communicate with one another more intensively. Common information interfaces are an important condition for this, so that the benefits of piloted driving can be better utilized on expressways. The digital test site on the A9 autobahn – announced by the German Federal Ministry of Transport and Digital Infrastructure – offers ideal conditions for evaluating and further developing future functions and concepts together with representatives of the Free State of Bavaria, the automotive industry and the IT industry. The brand with the four rings can once again probe the technical possibilities of Car-to-X communication here – under real road conditions and in real time.

In the future, information on variable-message traffic signs, for example, will be digitally transmitted into the car in order to assist the traffic flow. In addition, Audi is defining and testing elements of the future communications standard 5G together with IT partners. Car-to-X communication immediately enables piloted driving cars to use paved road shoulders when these are temporarily opened.

Another step forward is Car-to-Car communication between automobiles that are traveling on the same routes. They can report on hazardous points and accidents in real time. The driving speeds of other road users operating with piloted driving are then automatically adjusted to the potential hazard.

The local infrastructure plays a special role for piloted driving on the expressway. In addition to sensors in the car, signals from the environment give the driver a precise preview of the road ahead. Audi’s partners for the digital test site on the A9 autobahn, for example, are testing the internal composition and modified material structure of roadside posts. These are to be designed to reflect the radar sensors of cars even from greater distances. In addition, project participants within the scope of the test parameters are studying special traffic signs that allow the test vehicles to localize their positions with high precision within the various driving lane markings.

For most customers, the complexity of traffic situations significantly intensifies again along the route segment from the expressway exit to city zones. Audi is researching and developing another test site for this so-called “first mile” near the redesigned autobahn exit “Ingolstadt-Süd.” From 2017, Audi – together with the city of Ingolstadt – will be testing construction methods such as the use of different types of pavement as well as technical solutions such as the use of sensors in intersection zones. Piloted driving research cars from Audi are already being incorporated into the design of the new infrastructure. Test operation should begin in 2018.

Video material about piloted driving can be found at: www.audimedia.tv.