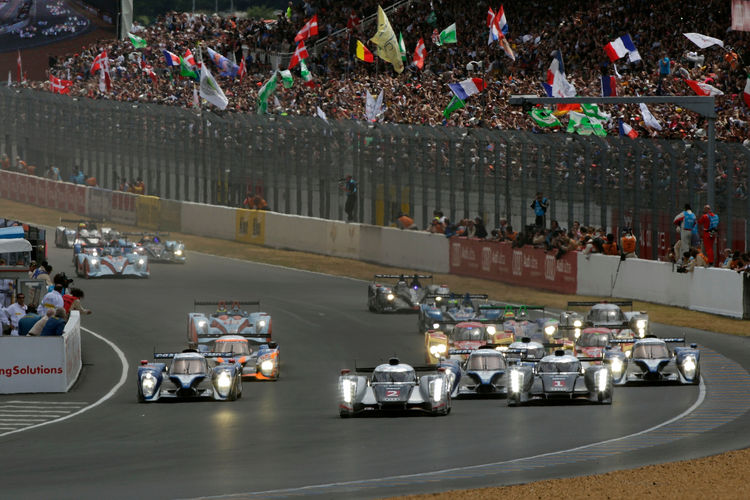 Not only the three Audi R18 TDI cars attracted attention at the Le Mans 24 Hours. The e-tron Spyder concept car and the Q5 hybrid quattro road car are proving Audi’s expertise at Le Mans off the track and aside from the racing action as well. In addition, numerous high-caliber guests and a wide range of activities involving the factory drivers focus the spotlight on Audi at Le Mans.

Ready for the future with electrification: Audi showcased the e-tron Spyder to a large audience. As part of the “Le Mans vers le futur” presentation the prototype with an electric powertrain was seen on the track as was the Audi Q5 hybrid quattro. The Audi e-tron Spyder can generate a system power output of 388 hp with two electric motors and a TDI engine. The production SUV Q5 hybrid quattro will go on sale before the end of 2011.

Many members of the management board from Audi and from the Group used the opportunity of the Le Mans 24 Hours for a visit. Prof. Dr. rer. nat. Martin Winterkorn, Chairman of the Management Board of the Volkswagen Group, Michael Dick (Member of the Audi Management Board for Technical Development), Peter Schwarzenbauer (Marketing and Sales), Axel Strotbek (Finance and Organization) were at the venue as were Jochem Heizmann (Commercial Vehicles of the Volkswagen Group), Wolfgang Dürheimer (Chairman of the Management Board Bentley Motors, Managing Director Bugatti S.A.) and Wolfgang Hatz (Research and Development Porsche AG).

Reward for last year’s performance: Michelin again gave a present to the winners of the Le Mans 24 Hours from the previous year. Since Tuesday the Audi factory drivers Timo Bernhard, Romain Dumas and Mike Rockenfeller have each been the proud owner of a race kart sporting the colors of the French tire manufacturer.

Happy 50th anniversary: The official museum of the 24-hour race was inaugurated half a century ago. On Tuesday Dindo Capello attended the anniversary celebration for the collection which is now made up of more than 100 cars.

The first time: Timo Bernhard, Romain Dumas and Mike Rockenfeller as last year’s winners had the opportunity to leave the traditional handprints. On Monday they met in the inner city of Le Mans to have the classic picture taken. Afterward Mayor Jean-Claude Boulard and Chamber of Commerce President Bernard Warrain received the trio.

For the twentieth time: In 1991 the Le Mans organizer started the tradition of the handprints. On the occasion of the 20th anniversary Head of Audi Motorsport Dr. Wolfgang Ullrich, ACO President Jean-Claude Plassart and Head of Peugeot Sport Olivier Quesnel were invited to leave their handprints as well. They have been captured for eternity on a plaque in the Village at the race track.

People who have made history: Le Mans Miniatures is presenting a new series of true-to-scale statues of personalities associated with the race. Dr. Wolfgang Ullrich is the model for one of the first of the 1:18 scale figurines that were created.

Jackie Stewart visited Audi as well. The three-time Formula 1 World Champion was given a personal tour of the Audi pits by his Scottish compatriot Allan McNish on Saturday. The six-time Le Mans winner Jacky Ickx, who acts as a brand ambassador for Audi, also kept his fingers crossed for Audi Sport Team Joest on location.

Three other personalities who are associated with Audi through other racing series would not miss the showing along the Sarthe either. DTM driver Filipe Albuquerque was impressed with his first visit to this 24-hour classic. Phoenix team director Ernst Moser and WRT team director Vincent Vosse traveled to France also.

Commitments by legends: Frank Biela, Emanuele Pirro and Marco Werner, who between themselves have clinched 13 Le Mans victories with Audi, handled various PR commitments for Audi around the race too. The two-time Le Mans winner Hans-Joachim Stuck worked as a TV commentator for SAT.1.

Mobile with electric power: The manufacturer of a golf buggy made a unique vehicle available at Le Mans to record winner Tom Kristensen. Similar to the Audi R18 TDI, the buggy powered by electricity sported yellow graphics. It has a refrigerator, a folding roof, leather seats, chromium-plated aluminum wheels and is registered for road use.