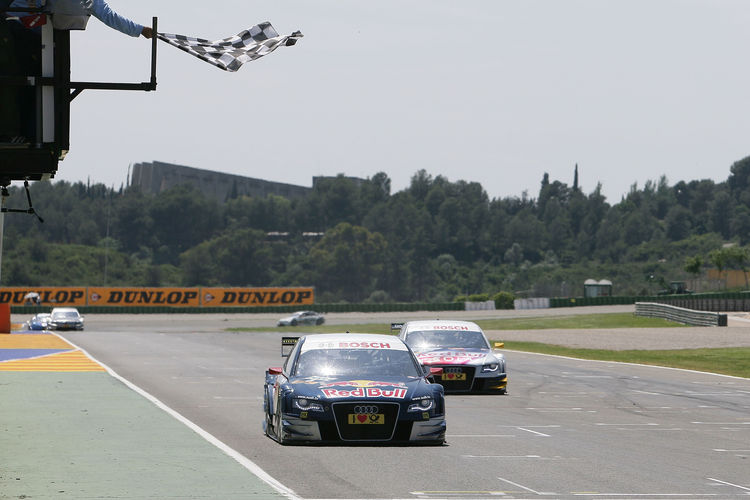 Audi struck back: after the disappointing season opener at Hockenheim Mattias Ekström clinched a commanding Audi victory at the second round of the 2010 DTM. With five A4 DTM cars in the top eight places, the brand with the four rings was the strongest manufacturer at the DTM’s debut at Valencia (Spain). The joy over the good result was marred by the exclusion of Martin Tomczyk who had originally finished as the runner-up.

In front of the eyes of Prof. Dr. Martin Winterkorn, the Chairman of the Management Board of the Volkswagen Group, Mattias Ekström delivered a perfect weekend: pole position, victory and fastest lap. The Swede took the lead at the start, managed to extend the gap to his rivals, achieved an advantage of up to six seconds, and then continued to control the pace in blazing heat of almost 30 degrees centigrade in the shade and track temperatures of about 50 degrees.

“If you haven’t won for such a long time you can really feel how sweet victory is,” said Ekström after clinching his 14th exploit in the most popular international touring car racing series – and his first since the race at Le Mans in October 2008. “Today, everything worked perfectly. My thanks go to Audi and Audi Sport Team Abt Sportsline. The tires held up too. I was a little worried when I felt some vibrations – but that was just pick-up on the tires. The ten points for the championship really feel good.”

The crucial factor on the 4.005-kilometer circuit at Valencia was the set-up, which Audi Sport’s technical squad managed to a T. It enabled Martin Tomczyk to advance from position nine on the grid to second with two late pit stops. “The strategy was outstanding,” enthused the German who had suffered a puncture at the Hockenheim season opener while clearly leading the race. “The car was running like a charm. I was able to drive one fast lap after the other. After my second pit stop I was on the track behind ‘Eki’

Tomczyk’s joy over his second place only lasted until about 7 p.m., though. Because one of the twelve tires used on his Audi A4 DTM was accidentally taking from a wrong lot, the Audi driver’s was disqualified in the evening due to a “formal mistake.”

“This did not give Martin any advantage but the rules prescribe an exclusion in this case,” explained Head of Audi Motorsport Dr. Wolfgang Ullrich. “Principally, it was a great race for Audi – and we could have been very pleased with the original result. Our cars were very fast and our drivers strong. Overall, it was a strong team performance. ‘Eki,’ Oliver (Jarvis) and Martin (Tomczyk) determined the race. It could have been a 1-2-3 exploit for Audi. But the problem with the lack of fuel pressure with Oliver’s car, which we still need to analyze, and the mishap in Martin’s team prevented our possible one-two-three win.”

With Alexandre Prémat, Timo Scheider, Mike Rockenfeller and Miguel Molina in places three, four, six and eight, four other Audi drivers finished in the points. Prémat (Audi Sport Team Phoenix) fought a fierce duel with Mercedes driver Gary Paffett in the early stages, which continued to be the subject of discussions after the race. “I’ve got no reason to apologize, that was 50:50,” said the Frenchman who subsequently inherited the third position on the podium.

Miguel Molina, as well, was battling with Gary Paffett – and not just once, but twice: in the first act, the 21-year-old local hero pushed passed the Briton’s Mercedes in a surprise attack. On the final lap Paffett countered and grabbed eighth place from Molina. Due to Tomczyk’s disqualification, the Spaniard moved up into the points again.

Oliver Jarvis was similarly fast in the race as Mattias Ekström and Martin Tomczyk, but coasted down eight laps before the end of the race while running in third place. Markus Winkelhock (Audi Sport Team Rosberg) had to park his Audi A4 DTM after 34 laps due to a defect of the left rear suspension. His team colleague Katherine Legge was unable to contest the race due to an infection.

In the drivers standings Mattias Ekström with 13 points is the runner-up, with a three point gap to the new leader of the standings Bruno Spengler. The next DTM race will be held two weeks from now at the EuroSpeedway Lausitz.