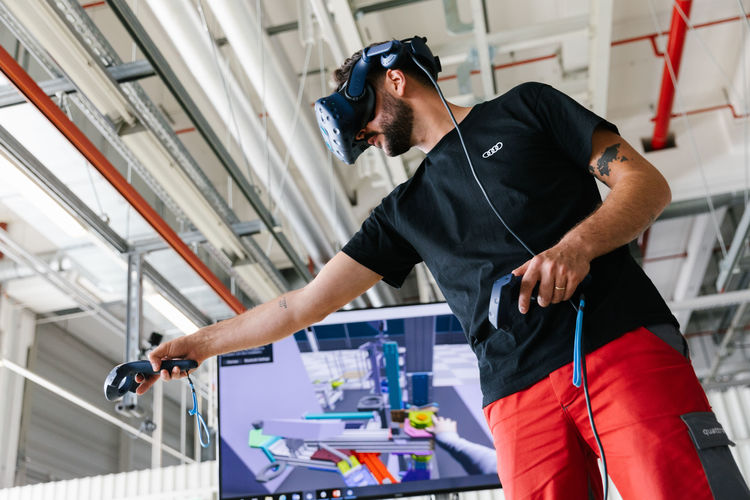 Audi is embracing virtual reality (VR) with the Audi e-tron GT: Using VR glasses and controllers, employees from various departments test all assembly processes entirely virtually. Audi has developed in-house its virtual reality software for the process. This relies on 360-degree scans that provide a three-dimensional indoor map for the virtual space. The technology is being used for the first time for testing the assembly processes for the e-tron GT at the Neckarsulm site.

This is the first time that workflows along the assembly line and the associated logistics processes are being tested entirely virtually in the “3P workshops”. In the production system, 3P stands for the Production Preparation Process, and is used for process validation. With the workshops, the planners along with colleagues from Logistics, Assembly, Pre-Series Center and Quality Assurance run through all the work steps and check the planned processes for their feasibility. Are all the work steps ergonomically sound? Is the positioning of the tool trolley right? Hitherto these tests used to be conducted in workshops on prototypes. “The e-tron GT is the first vehicle in the VW Group to dispense with an actual prototype in the 3P workshops,” explains Markus Moinot, Head of Production Planning Processes in Neckarsulm.

The “3P workshops” project is the result of close collaboration between Assembly Planning in Neckarsulm, Assembly Planning in Ingolstadt and the Audi Production Lab (P-Lab). The team in the P-Lab developed the software in-house. It is now being used for the first time in Neckarsulm as part of planning for the e-tron GT. The digitization of the workshops drives forward the company’s digital transformation. Bernd Widdmann, Head of Assembly Planning Methods in Ingolstadt: “Digitization of the workshops was a logical, consistent step toward further developing the existing 3P method. With the virtual workshops we also facilitate good, highly effective collaboration of participants from various sites. At present, we are testing this between Ingolstadt and San José Chiapa in Mexico.” The switch to the digital world promotes collaboration between the teams and sites, while also saving resources, for instance thanks to fewer business trips. As such, the technology has enormous potential for the entire Volkswagen Group. “Audi has assumed the role of brand leader with the development of the VR method for the 3P workshop,” adds Markus Moinot.

The 360-degree scans are a vital element in implementing the 3P workshops virtually. To this end, production halls or complete buildings are scanned three-dimensionally using custom software and hardware. Audi is collaborating with a start-up from Munich to create a virtual copy of the production facility. The result is extremely precise, with measurements of a cycle, for instance of the cockpit installation on the R8 or the e-tron GT, accurate down to a few millimeters. On the basis of this data, production is then planned and the cycles and equipment set up. At the same time, the scan process generates a point cloud, which can be used to reconstruct the equipment and infrastructure virtually. The Audi employees can therefore digitally update their layout and planning systems, saving time and money in the process. The 360-degree model in the Böllinger Höfe is another important step toward digital shadows.