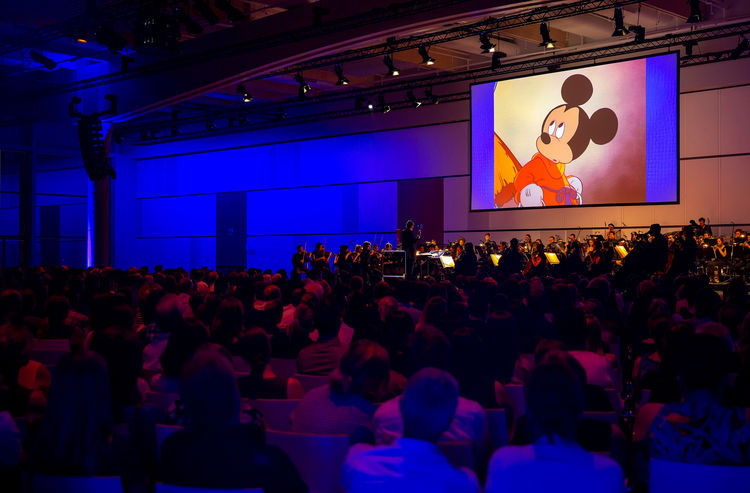 Ingolstadt, 30 June 2019 – The Audi Summer Concerts began at the weekend for the 30th time under the title Ouverture Fantastique. Many families came to Audi’s hall for employee assemblies to see Walt Disney’s film Fantasia with the Philharmonie Salzburg conducted by Elisabeth Fuchs. For the traditional opening concert, the Bavarian Radio Symphony Orchestra under Daniel Harding returned to the concert hall in Ingolstadt after eight years. The festival will continue until 14 July 2019.

For the opening of the Audi Summer Concerts an audience of more than 1,300 came to the hall for employee assemblies at Audi on Saturday evening to enjoy the Disney film Fantasia with a live orchestra. The Philharmonie Salzburg led by the Austrian conductor Elisabeth Fuchs played its way into the hearts of the young audience to accompany Walt Disney’s well-known images. For this concert, Audi admitted concert-goers for the first time to its hall for employee assemblies, opened in 2017. The new artistic director of the Audi Summer Concerts, the internationally renowned violinist Lisa Batiashvili, inaugurated her first festival with this family concert. Batiashvili and Audi share the vision of reaching out to the people of the region with culture. “Classical music can tell stories that appeal to everyone. It is not remote or outdated – it is timeless,” she said, summarizing what motivates her for the festival.

On Sunday evening, one of the world’s best orchestras, the Symphonieorchester des Bayerischen Rundfunks (Bavarian Radio Symphony Orchestra) returned to the concert hall in Ingolstadt after an interval of eight years. With Daniel Harding at the rostrum, the ensemble delighted the audience in the full hall with works by Béla Bartók and Hector Berlioz. The soloist for this evening, Jean-Yves Thibaudet, also played Maurice Ravel’s Piano Concerto in G major, thus making his triumphant debut in Ingolstadt.

Many high-caliber artists, including Paavo Järvi and the Deutsche Kammerphilharmonie Bremen (Bremen German Chamber Orchestra), Gautier Capuçon, Gidon Kremer, Les Vents Français and Alfred Brendel with the Quatuor Hermès are performing in Ingolstadt in the festival during the two upcoming weeks. Under its motto, Fantastique, audiences can look forward to a diverse program that ranges from chamber music in the museum to concerts with talks, discussions with artists, open-air concerts and large-scale symphonic concert evenings.

The Audi Jugendchorakademie (Youth Choir Academy) and the orchestra Le Cercle de l’Harmonie, conducted by Jérémie Rhorer, will perform the concert oratorio Paradise and the Peri by Robert Schumann. The choir will sing once again at the Audi Classics Open Air in the Klenzepark on 14 July, when François-Xavier Roth and his orchestra Les Siècles will conclude the festival with Hector Berlioz‘Symphonie Fantastique.

The Audi Summer Concerts are taking place until 14 July 2019.

For tickets and the latest information, see www.sommerkonzerte.de

Media materials and the program to download are available at:
www.audi-mediacenter.com/de/sommerkonzerte-293