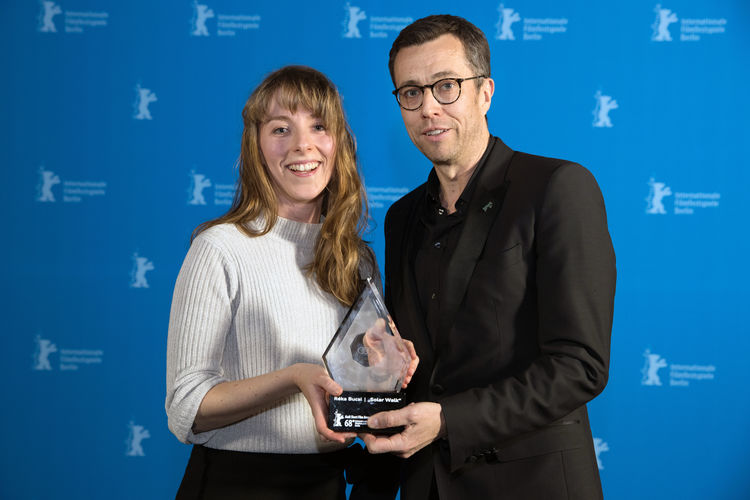 Hungarian filmmaker Réka Bucsi is the winner of the Audi Short Film Award at the 68th Berlin International Film Festival. The award carries a € 20,000 prize. In the “Berlinale Shorts” section, the international short film jury honors the 29 year old’s exceptional artistic signature in her film “Solar Walk”. During the Berlinale, the varied cultural program on offer in the Audi Berlinale Lounge fascinated the audience. More than 16,500 guests visited the Lounge and the “Berlinale Open House” public events.

Hungarian director Réka Bucsi from Budapest wins the Audi Short Film Award at the 68th Berlin International Film Festival with her film “Solar Walk”. The 29 year old was able to convince the International Short Film Jury with her virtuoso animation film. It follows the journey of individuals and their creations in space. In its series of sequences and situations, “Solar Walk” recalls the liberating effect of automatic writing which was employed by the surrealists in the 1920s as the basis for a new kind of creativity.

This year, the central theme running through the “Berlinale Shorts” program curated by Maike Mia Höhne was that of empowered and experimental artistic approaches. A total of 22 entries from 18 countries were assessed by the international short film jury, consisting of Diogo Costa Amarante, Mark Toscano and Jyoti Mistry. “It is inspiring to see how both young and experienced filmmakers tackle the issues of the moment and how differently they portray them” says Jason Lusty, Head of Marketing Germany at AUDI AG. “What impressed me was the emotional impact of the entries. The short film is without question one of the greatest art forms.” The Berlinale confers the Audi Short Film Award in the Berlinale Shorts section alongside the Golden and Silver Bears. The EUR 20,000 prize money makes the award one of the world’s most generously endowed prizes for short films.

Diversity and discourse were also reflected in the extensive supporting program in the Audi Berlinale Lounge. Over 6,000 guests visited the pavilion which is located right next to the Berlinale Palast and ensured a full house on every occasion. The public events in the “Berlinale Open House” ranged from film talks to morning yoga classes with a view of the red carpet. The “Berlinale Lounge Nights” provided the perfect way to round off the long days at the festival.

About Réka Bucsi:
Born in Filderstadt, Germany in 1988, between 2008 and 2013 she studied animation at the Moholy-Nagy University of Art and Design (MOME) in Budapest, Hungary. In 2013 she attended Animation Sans Frontières (ASF) in Viborg, Denmark, where she also participated in the Open Workshop's artist-in-residence programme. She has also been artist in residence at Q21 in Vienna, Austria.