Audi R8 LMS wins in the ADAC GT Masters, in the 24H Series and in the STT 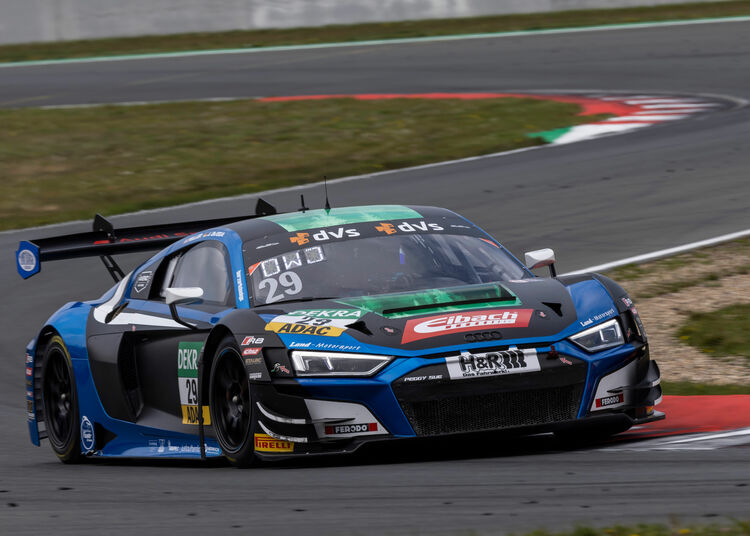 The new Audi R8 LMS GT3 evo II took the lead of the standings in the ADAC GT Masters at the season opener and won an endurance race of the 24H Series at Spa. Uwe Alzen rounded off the tally with two further victories in the Spezial Tourenwagen Trophy. Class victories were also achieved by the Audi R8 LMS GT4 and the Audi RS 3 LMS.

Successful start to the season: The Audi customer team Montaplast by Land-Motorsport began the new season in the ADAC GT Masters where it ended the previous one – at the top. Ricardo Feller, who clinched the championship title last year, won the first race with his new teammate Jusuf Owega on the opening weekend at Oschersleben. Owega from Cologne had started from second place in the Audi R8 LMS on Saturday. Through a clever strategy, Christian and Wolfgang Land’s squad made up valuable seconds with a late pit stop. Audi Sport driver Ricardo Feller took over the cockpit in the second half of the race, overtook the man in front of him, Arthur Rougier, and celebrated victory with a four-second advantage. Sixth place in the second race was enough for the driver duo to lead the standings with a seven-point advantage. The best Audi team on Sunday was Rutronik Racing. Audi Sport driver Patric Niederhauser had secured pole position with a new qualifying record. In the early stages, however, competitor Jules Gounon overtook the Swiss driver. Together with his new Audi Sport teammate Luca Engstler, who is contesting his first GT3 season, Niederhauser finished second in the end. They are thus third in the overall standings.

Thrilling victory for Phoenix Racing: For the second time this season, an Audi R8 LMS won a round of the 24H Series. After the 24-hour victory of Team WRT at the season opener in Dubai, Phoenix Racing prevailed in the third race, the Spa 12 Hours. The GT3 sports car driven by Audi Sport driver Pierre Kaffer and his privateer teammates Michael Doppelmayr, Elia Erhart and Patryk Krupinski fought a thrilling three-way battle with a Mercedes-AMG from CP Racing and a Ferrari from WTM Racing. Since Phoenix Racing relied on a different strategy than its rivals in terms of fueling intervals, the lead changed several times between the Audi team and CP Racing in the second half of the race. After CP Racing had to save fuel at the end and WTM Racing dropped back due to two punctures and a driver change shortly before the end, Phoenix Racing had the advantage. Elia Erhart also passed the final stage: a rain shower in the last eight laps demanded everything from the drivers. Doing the final stint in the easily controllable Audi R8 LMS, the driver from Franconia remained uncatchable even on slicks and won with a one-lap advantage. Third place in the GT3-Am classification went to the Audi customer team Car Collection Motorsport with drivers Dr. Johannes Kirchhoff, Max Edelhoff and Tim Müller, who had led the race for a time.

Uwe Alzen unbeaten: Audi customer Uwe Alzen continued his winning streak in the Spezial Tourenwagen Trophy. On the second race weekend at the Hockenheimring, the veteran in the Audi R8 LMS again won both sprints. At the first start, Alzen’s brother Jürgen initially took the lead in the Ford, but the two-time champion regained the lead in the Audi on the second lap and won by 16 seconds. In the second race, Uwe Alzen’s fourth win of the season was not in doubt after his brother retired with a technical problem.

Two successes in South Africa: Marius Jackson enjoyed a successful second weekend in the G&H Transport Extreme Supercars race series. The South African won his class in the GT3 version of the Audi R8 LMS in both sprints at the Zwartkops circuit. In the second race, he finished third overall.

Class wins at Zwartkops: Kwanda Mokoena contested the second race weekend of the G&H Transport Extreme Supercars in South Africa in the Audi R8 LMS GT4. In both sprint races at the Zwartkops circuit, which lasted 15 laps each, the privateer driver won his class in the production-based model. He finished in the top ten of the overall standings in each case.

Double victory for the Scandinavians at the Nürburgring: The two Audi customer teams Max Kruse Racing and Møller Bil Motorsport with their Scandinavian driver teams had a firm grip on the TCR class on the second race weekend of the Nürburgring Langstrecken-Serie. The two Danes Peter Hansen and Lars Nielsen won this touring car class with an Audi RS 3 LMS by 1.54 minutes. Second place went to the three Norwegians Håkon Schjærin/Kenneth Østvold/Anders Lindstad. In an Audi fielded by the Norwegian team Møller Bil Motorsport, they put a gap of 6.15 minutes between themselves and their pursuers in a Seat over the course of 25 race laps on the Nordschleife.

Class success in club racing: Jesper Henriksen/Frederik Vodder celebrated a class win in the second round of the DMV NES 500. The two Danes covered two more laps in the Audi RS 3 LMS on the Zolder circuit over the course of three hours of racing than their pursuers in a VW Golf GTI.