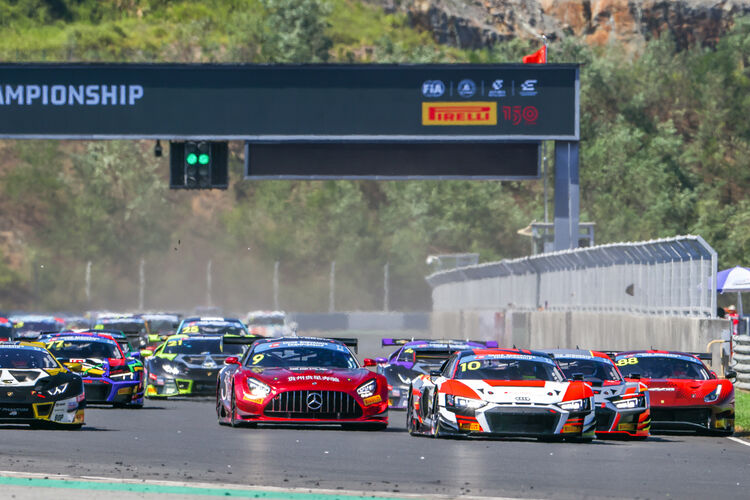 Audi Sport Asia’s juniors managed a strong start to the season with the GT3 version of the R8 LMS in Chinese endurance racing. The teams also led the GT4 variant and the TCR model Audi RS 3 LMS to race victories.

Successful weekend in China: Audi Sport Asia experienced an excellent race weekend at the Ningbo race track with three GT3 victories. In the China Endurance Championship, the two up-and-coming drivers Yu Kuai and Cao Zhuo achieved their first success with the Audi R8 LMS. The two Audi Sport Asia Juniors from China crossed the finish line in second place at the end of the two-and-a-half-hour race. A subsequent sporting penalty for the winners meant that the two talents from Audi Sport Asia Team Absolute ultimately won by 15.1 seconds ahead of their Lamborghini pursuers. In the GT Super Sprint Challenge as part of the same event, the privateer driver with the pseudonym Rio remained unbeaten. He won the first race in the Audi R8 LMS by 7.3 seconds. In the second race, his team Uno Racing was even pleased with a gap of 18.3 seconds at the finish. Rio thus leads the GTSSC standings and is also in front in the Audi Sport Asia Trophy’s internal brand classification for privateer drivers.

Yasser Shahin takes sole lead of the standings: In the Fanatec GT World Challenge Australia, Audi privateer driver Yasser Shahin has distanced himself by ten points from his closest rival and brand colleague Liam Talbot on the third race weekend. Last year’s champion, who was previously tied at the top with three other Audi drivers in terms of points, recorded two first-class results in Queensland in the Audi R8 LMS. Garth Tander returned as his teammate for the first time this season. The duo secured pole position for The Bend/Valvoline team for both 60-minute races. In the first race, Shahin led from the start, but after the pit stops a Mercedes-AMG took the lead and won ahead of Shahin/Tander. Third place went to Liam Talbot/Fraser Ross in the Team Coin Spot Audi. In the second race, Garth Tander took the lead at the start. When Yasser Shahin took over, he pulled away while behind him a duel broke out between Team Coin Spot’s Audi and the Mercedes-AMG of Prince Jefri Ibrahim/Shane van Gisbergen. In the end, Shahin/Tander won by 9.3 seconds ahead of their Audi brand colleagues Liam Talbot/Fraser Ross. Two one-two-three wins in the Am class and a class victory in the Trophy classification round off the Audi customers’ tally in Australia.

Third place in America: Jason Daskalos entertained the spectators at the fifth round of GT America powered by AWS with exciting fights for position at the city race in Nashville. In the battle for second place, positions kept changing over the course of the 40-minute race. After 25 laps, Daskalos had to admit defeat to his main opponent by 1.4 seconds and took third place.

Silverware in South Africa: At the fifth round of the G&H Transport Extreme Supercars Series, Marius Jackson was delighted with a podium result in the second sprint of the weekend. On the East London circuit, the Audi privateer managed third place in the R8 LMS GT3 of his MJR Motorsport team.

Two wins in China: Vincent Lin had a perfect run on the second weekend of the GT Super Sprint Challenge in China. The privateer from the Absolute Racing team steered his Audi R8 LMS GT4 to two class wins on the Ningbo circuit. In the first sprint he was 22 seconds ahead of his pursuer in a Porsche. In the second race, a much tougher competition emerged. Lin won by just four tenths of a second ahead of Li Xuanyu in another Audi R8 LMS GT4 after 30 minutes of racing. In the China Endurance Championship endurance race, the production-based sports car took another trophy at the same event. Team Z.SPEED Racing finished third after two and a half hours of racing with the driver trio of Jiang Nan, Lu Wenhu and Yang Haojie.

Victory on home turf: Nathanaël Berthon managed his first victory of the year in front of a home crowd on the seventh race weekend of the WTCR – FIA World Touring Car Cup. The Audi Sport driver had missed the pole position for the first sprint on the Anneau du Rhin by only 26 thousandths of a second. In the race, the Frenchman in the Comtoyou DHL Team Audi Sport Audi RS 3 LMS managed a perfect start in which he overtook front runner Nestor Girolami in a Honda. In the course of the 22 race laps in Alsace Berthon remained permanently in the lead. The 33-year-old professional withstood the pressure of the Argentinean, who in the end finished just 0.299 seconds behind. After two previous victories by Gilles Magnus in Spain and in Italy, this was already the third WTCR season victory for the Audi RS 3 LMS. Jean-Michel Baert’s Belgian team subsequently clinched another trophy. In the second sprint, privateer Mehdi Bennani was the best Audi driver. Only Cupra driver Rob Huff was faster at the start than the privateer from Morocco, who in the end finished 0.896 seconds behind in second position, his personal best of the season. Best Audi driver in the standings remains Gilles Magnus in fourth ahead of Nathanaël Berthon, while Comtoyou Team Audi Sport is third out of eight teams in the team standings. In addition to that, Bennani is second in the Trophy classification for privateers.

Lead increased: Audi privateer Jerimy Daniel significantly extended his lead in the Sports Car Championship Canada powered by Michelin on the fourth of six race weekends. On the Trois-Rivières circuit, he won the first sprint in the Audi RS 3 LMS of the TRC Motorsport team with a twelve-second advantage over pursuer Tom Kwok in a Honda. Daniel was also the best of six Audi customers in the second sprint. With a 3.6-second lead over teammate Jean-François Hevey in another Audi, Daniel won this race as well. After his third win of the season, Daniel extended his lead in the championship from nine to 42 points.

Excitement in Australia: At the fifth of seven race weekends of TCR Australia, Audi driver Jay Hanson moved closer to the top of the standings again. With two third places in the first and last sprints and a victory in between in the second race, the privateer driver made up two championship positions in the RS 3 LMS of the Melbourne Performance Centre. He had traveled to Queensland in fifth place and returned in third. Another of a total of four Audi drivers in the field also contributed a trophy to the weekend’s tally: William Brown from MPC Team Liqui Moly helped the MPC squad of Troy Russell and Lee Burley to a one-two finish in the second race behind Hanson.

1-2 victory in endurance race: Audi customers dominated the TCE class at the inaugural round of the China Endurance Championship. On the Ningbo circuit, two Audi RS 3 LMS cars crossed the finish line in positions one and two after two and a half hours of racing. Victory went to Pointer Racing with Feng Xiaoling/Hu Heng, with second place going to the squad of Team 326 Racing.

Third place in Great Britain: Bradley Hutchison was delighted with his first podium result on the fifth race weekend of the TCR UK at Castle Combe. The British privateer from the Bond-It with MPHR team finished third in the Audi RS 3 LMS in the first sprint after 25 minutes of racing.