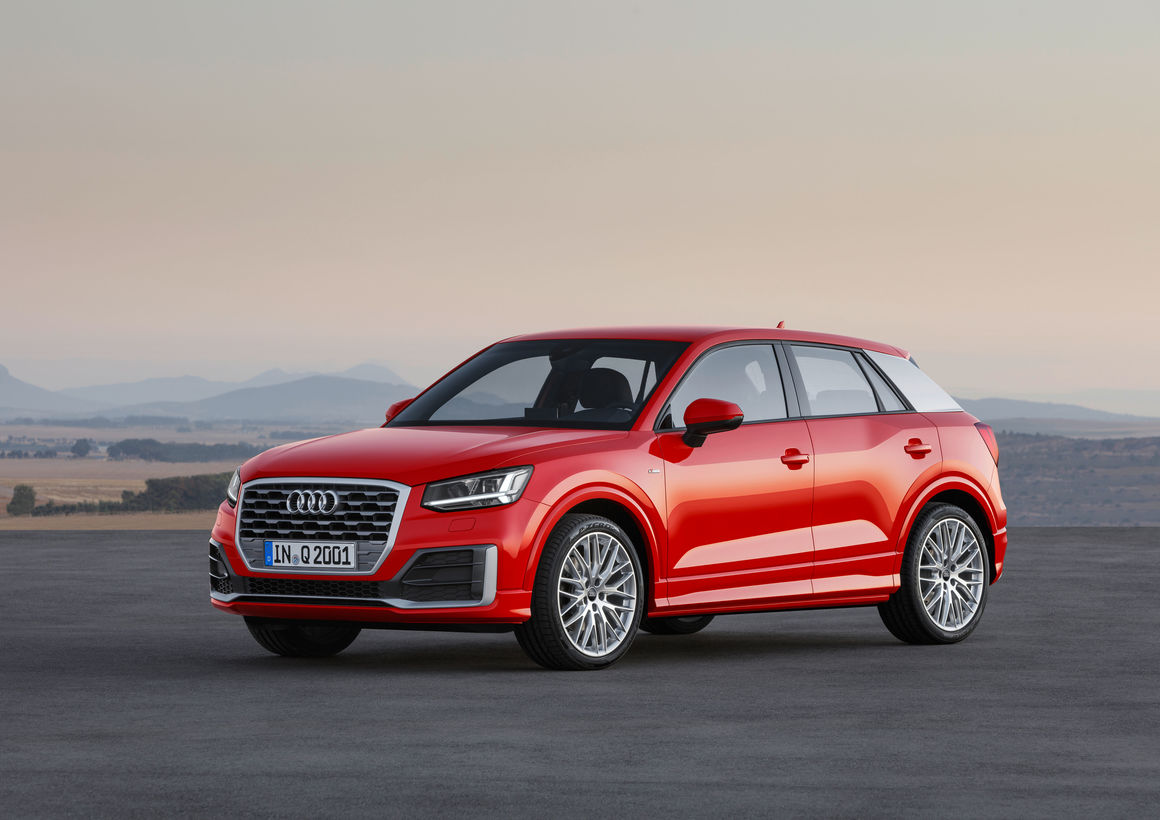 The Audi Q2 is an urban-type vehicle for everyday driving and recreation, combining a progressive design, tremendously fun driving and a high level of functionality. The compact SUV’s connectivity, infotainment and assistance systems are on the level of the full-size category.

Design
The Audi Q2 is a powerful SUV that exhibits a very distinct character. At the front, the Singleframe grille in octagonal design that is positioned up high as well as the large air inlets create a strong image. Especially eye-catching is the low roof that descends and merges into the C-pillars with color offset blades. This contrast accentuates the sportiness of the Audi Q2. The rear body terminates in a dynamic way with a long roof edge spoiler and a diffuser that has an underbody-protection look. In a side view, the high shoulder line is especially eye-catching as are the concave flanks in the door area. The latter emphasize the wheel housings and thereby the quattro character of the compact SUV. The vehicle measures 1.51 meters (5.0 ft) tall and 1.79 meters (5.9 ft) wide. The overhangs are short, with a vehicle length of 4.19 meters (13.7 ft) and a wheelbase of 2.60 meters (8.5 ft).

Interior
The Audi Q2 is as individualistic as its drivers. A variety of equipment packages as well as expressive colors for interior trim and seat upholstery allow plenty of creative space for personal configuration. One option is the LED lighting package, in which the interior is staged in a particularly attractive way with illuminated trim elements.

The Q2 resembles a typical SUV, with high door sills, good visibility and a large luggage compartment (355 to 1,050 liters (12.5 – 37.1 cu ft) of capacity). The highlight is that the driver’s seat position is sporty and low in relation to the steering wheel, like in an Audi sedan. Options include a power tailgate and a three-way split rear bench backrest with cargo through-loading.


Drive system
Audi offers the Q2 in six engine variants. Along with a 1.0-liter three-cylinder TFSI, two four-cylinder gasoline engines are offered with 1.4 and 2.0 liters of displacement, respectively. In addition, three four-cylinder diesel engines are available with 1.6 and 2.0 liters of displacement, respectively. Their power outputs range from 85 kW (116 hp) to 140 kW (190 hp).

Audi also offers the S tronic dual-clutch transmission with all engine variants as an alternative to the six-speed manual gearbox. In the case of the top TDI and the 2.0 TFSI, a newly developed dual-clutch transmission is used, which has a new type of oil supply and reduced friction. Both engines may also be combined with a quattro permanent all-wheel drive system as standard equipment.

Suspension
Progressive steering is standard in all Q2 variants. The steering gear ratio changes as a function of the steering input, becoming more direct with large steering movements. A suspension with damper control is optionally available, as is the Audi drive select system with which the driver can set an individual characteristic for their Q2. Installed at the rear on the front-wheel drive versions is a semi-independent suspension, while the quattro models have a four-link suspension.

Infotainment and Audi connect
Standard in the Q2 is a 5.8-inch MMI screen that is positioned high up on the instrument panel. The infotainment system can be operated by a rotary/push-button control and two buttons on the center tunnel. When MMI navigation plus with MMI touch is ordered, the user also gets a touchpad on the central control element. In addition, the system can be conveniently controlled by natural language operation and the integrated MMI search.

A Wi-Fi hotspot enables surfing and streaming with mobile end devices. In addition, customers can use MMI touch to access the online services of Audi connect. The flat rate data plan required for this is included, thanks to the SIM card (embedded SIM) that is permanently installed in the car. It also permits roaming in most European countries. Cell phones with iOS and Android operating systems are integrated into the car via the Audi smartphone interface.

The free Audi MMI connect app enables online media streaming as well as transferring a calendar from smartphone to MMI. The app for iOS operating systems also has the myAudi destinations function. It makes it possible to send the data of a desired navigation destination from any app to the MMI navigation plus system. The system then uses it for navigation.

Assistance systems
Along with the optional Audi virtual cockpit and the head-up display, the Audi Q2 comes with comprehensive driver assistance systems – including Audi pre sense front as a standard feature. The system recognizes critical situations with other vehicles or pedestrians crossing in front of the car, and if necessary it can initiate hard braking – to a standstill at low speeds. Other systems in the lineup: adaptive cruise control with Stop&Go function, traffic jam assist, the lane-departure warning system Audi side assist, the lane-keeping assistant Audi active lane assist, traffic sign recognition, park assist and rear cross traffic assist.