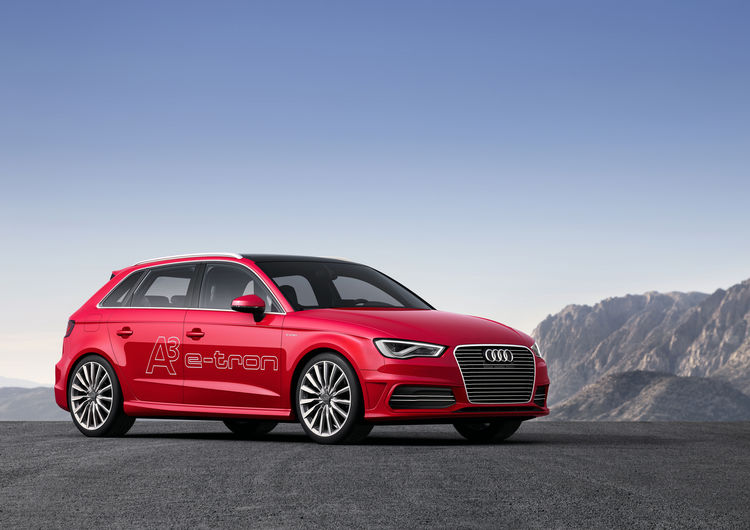 Audi has gained a wealth of experience from the 1.4 million kilometers (869,919.7 mi) covered as part of the Electric Mobility Showcase. The brand provided 80 Audi A1 e-tron prototypes and 40 production models of the Audi A3 Sportback e-tron* for the four-year support program conducted by the German government and the automotive industry. Trial participants have come to appreciate electric driving as a new and very attractive form of mobility.

Ahead of the closing conference commencing this Thursday in Leipzig, Audi reveals positive results for both of its models. With the Audi A1 e-tron, a prototype electric car with range extender, users quickly learned to trust in the technology, with the result that they were able to make extensive use of the car’s all-electric range. By the end of the trial, 87 percent of the distances traveled by the participants were being covered using electric power alone.

In the second phase of the Electric Mobility Showcase program, the trial participants in the 40 Audi A3 Sportback e-tron cars used all-electric mode for 70 percent of the distances traveled. Though the compact models with their plug-in hybrid technology are also well suited to long journeys, the test drivers usually covered

less than 50 kilometers (31.1 miles) a day. As a result, they stayed within the vehicles’ electric range. In fact, around half of all routine trial trips made by the users were shorter than 10 kilometers (6.2 miles). One participant, who had a particularly fuel-efficient driving style, refueled only once during a five-month period, despite covering 7,700 kilometers (4,784.6 miles) in his Audi trial car.

All in all, Audi concludes that the participants’ experience with clean, quiet and progressive electric mobility was a very positive one. However, the degree of satisfaction depended greatly on how conveniently they had been able to charge their vehicles.

Most users want to see a widespread infrastructure and generally greater promotion of electric mobility by the political bodies. The brand with the four rings is pushing for the charging infrastructure to be expanded – into customers’ garages as well as workplace car parks. Audi is also working with partners to develop a Europe-wide network of public rapid-charging stations which use direct current.

At the same time, Audi is also expanding its range of e-tron models which can be charged from the socket. “The Audi A3 Sportback e-tron and Audi Q7 3.0 TDI e-tron quattro* can already be ordered,” says Dr. Stefan Knirsch, Board Member for Technical Development. “By 2018, we will have five plug-in hybrid models in
the range and will have launched an all-electric SUV with a range of more than
500 kilometers (310.7 miles).”

The Electric Mobility Showcase program is a joint initiative of the German government and the automotive industry. Four ministries have lent their support to 90 individual measures in four regions of Germany. Audi was one of the first vehicle manufacturers to sign up to the program and when it commenced in 2012 was involved in six projects for which it provided a fleet of 80 Audi A1 e-tron prototypes. The vehicles were equipped with data acquisition equipment. The objective was to determine what expectations the trial participants had of electric mobility and to what extent these were met in everyday use.

The first phase of the project with the Audi A1 e-tron lasted one year and yielded valuable findings from the more than 550,000 test kilometers (341,754.2 miles) covered. Specific issues were investigated in the individual locations of Berlin, Nuremberg, Munich, Stuttgart, Ingolstadt and Garmisch-Partenkirchen. These included a new system for the charging and communications infrastructure and how electric mobility can be coordinated with the supply of green electricity to homes.

In April 2015, the brand with the four rings stepped up its involvement in the Electric Mobility Showcase, with 40 production models of the Audi A3 Sportback
e-tron taking to the road in Berlin, Munich and Stuttgart. As of March 2016, they have covered around 805,000 kilometers (500,203.8 miles) in total, gathering findings on issues such as the charging infrastructure on public roads and the usage patterns of commuters and commercial delivery services.

**Fuel consumption and CO2 emissions data are dependent on the choice of wheels and tyres as well as on the combination of engine and gearbox.