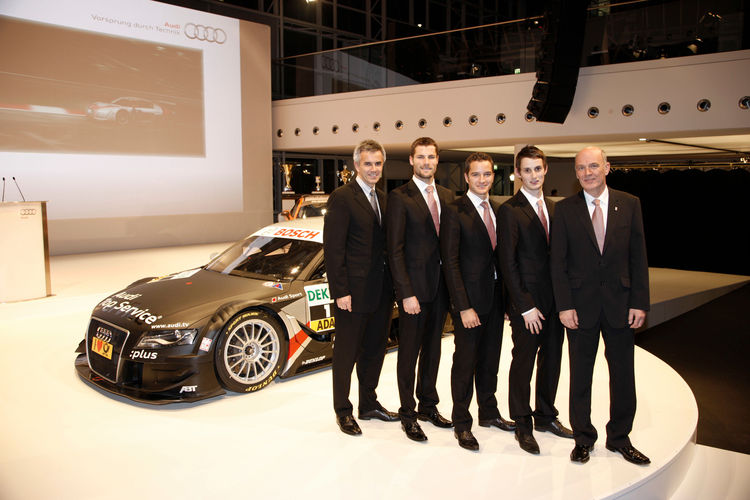 In 2010, the DTM, the 24 Hours of Le Mans and the customer sport program with the Audi R8 LMS will again be the three cornerstones of AUDI AG’s motorsport commitment. By participating in the inaugural “Le Mans Intercontinental Cup” Audi has opted for a new, forward-thinking racing series in which alternative drive concepts will be used.

“In 2009, the Audi brand has been celebrating its 100th anniversary and our motorsport squad presented the brand with a particularly nice birthday gift, the successful title defense in the DTM,” says Rupert Stadler, Chairman of the Management Board of AUDI AG. “Audi Sport has been a guarantor of successes in motorsport for as many as 30 years now – successes which are of major importance to the development of the Audi brand.”

In the 2010 season, Audi will again rely on motorsport categories that are very closely related to production vehicles: the DTM with the top-selling Audi A4, customer sport with the immediately successful Audi R8 LMS, and the sports prototypes with the Audi R15 TDI that has primarily been subjected to further aerodynamic development and bears the internal model designation “R15 plus” at Audi Sport.

The prototype commitment is of particular importance to Audi because this category makes it possible to field alternative power-train concepts and technologies. “In 2001, at Le Mans, we used a TFSI engine for the first time that has since become standard in production vehicles,” comments Head of Audi Motorsport Dr. Wolfgang Ullrich. “In 2006, we were the first automobile manufacturer in history to win the 24 Hours of Le Mans with a diesel-powered vehicle. And in the future we will use our LMP1 cars to test pioneering technologies and to underscore our ‘Vorsprung durch Technik’ claim also on the race track. Therefore, we welcome greatly the fact that the Automobile Club de l’Ouest (ACO) has announced the first international racing series for LMP1 vehicles. We are convinced that this motorsport category, which is particularly attractive from the perspective of technology, has prospects for a great future and fits our times well.”

Inaugural Le Mans Intercontinental Cup
In the future, the so-called “Le Mans Intercontinental Cup” will consist of the major races of the Le Mans Series in Europe, the USA and Asia and aims to continue the heyday of the legendary World Championship for Makes. In its debut year in 2010, the 1000-kilometer race at Silverstone (Great Britain), the “Petit Le Mans” race at Road Atlanta (USA) and an event on the Asian continent. Further races are to be added in 2011.

Audi will contest the new Le Mans Intercontinental Cup in the 2010 season with two R15 TDI cars fielded by Audi Sport Team Joest. Three cars are planned for the 24-hour race at Le Mans on June 12/13. Audi Sport Team Joest plans also to contest the 1000-kilometer race at Spa-Francorchamps (Belgium), which Audi would like to use as a dress rehearsal for Le Mans, with three cars.

Clear commitment to the DTM
By that time, the Audi DTM squad will have already contested the first two races. The most popular international touring car racing series will continue to be one of the cornerstones of AUDI AG’s motorsport commitment. After the technology for the 2010 season has been frozen by the regulations and the 2009 championship winning car will therefore start from the grid almost unchanged. Meanwhile work on the A4 successor vehicle has already begun at Audi Sport in Ingolstadt and Neckarsulm for the new Technical Regulations that will come into effect in 2011 with the aim of achieving further cost reductions.

For the 2010 season, Audi has opted for continuity in the DTM: Up to nine vehicles will be fielded by the proven Audi Sport teams of ABT Sportsline, Phoenix and Rosberg. The major change: The cockpit of Le Mans record winner Tom Kristensen, who will fully focus on sports car racing in the future, will be taken over by the young Briton Oliver Jarvis (25).

“We are thus giving our youngest ‘factory’ driver the chance to prove his prowess in a current DTM car,” comments Head of Audi Motorsport Dr. Wolfgang Ullrich. “The performances Oliver has shown in his first DTM years at the wheel of a year-old A4 speak in his favor.”

All other personnel decisions – for the sports prototypes as well as in the DTM – will be made in the next few weeks. “We want to position ourselves as best we can for the DTM and the 24 Hours of Le Mans as well as the Le Mans Cup in terms of our drivers’ line-up and are therefore deliberately taking our time,” stresses Dr. Wolfgang Ullrich.

Extended customer program with the Audi R8 LMS
The new GT3 sports car from AUDI AG, which scored 23 victories and three champion’s titles in its first racing season, will be delivered to customer teams starting at the end of March 2010 at a price of 298,000 euros (plus VAT). To ensure its ability to deliver optimal service, Audi Sport will limit sales to a maximum of 20 vehicles for the European market in 2010.

Audi will again support its customer teams at the Nürburgring 24 Hours on May 15/16. Two Audi R8 LMS cars will get special support from Audi.

“With the DTM, the sports prototypes and the R8 LMS, we are well positioned in motorsport,” says Michael Dick who, as management board member for Technical Development, is also responsible for AUDI AG’s motorsport commitment. “In these three categories the cost-benefit calculation in particular, which is of great importance in times like these, is appropriate.”