The next chapter of progressive luxury: the Audi grandsphere concept

Experience high-class future. Designed from the inside out, this is a pioneer for first class comfort. An immersive sphere that allows you to work, relax, connect or indulge. The Audi grandsphere concept* is the next chapter of progressive luxury. Innovative and intuitive, it is redefining the in-car experience and reimagining what is possible. Shaping the future, today. #FutureIsAnAttitude #Audi #AudiGrandsphereConcept #concept #emobility -------------------- *The vehicle shown is a concept vehicle that is not available as a production vehicle. The automated driving functions shown are technologies currently under development, are not available for production vehicles and only work within system limits. All possible uses of the technical systems and functions shown represent only a possible concept and are dependent on the respective legal regulations in the relevant country. Professional driver on a closed course.
09/13/21

What will move us next. At this year’s @IAA MOBILITY we shared our vision of the future and how we are actively shaping tomorrow, today. From design and sustainability to performance and digitalization, guest speakers took to the stage at the House of Progress to share ideas and talk about key issues around individualized mobility. Take a look at the highlights from the week and find out more at http://at.audi/iaa-yt-hfaudi. #FutureIsAnAttitude #Audi #LetsTalkAboutProgress #AudiIAA #IAA21 #IAAMobility -------------------- The vehicle shown is a concept vehicle that is not available as a production vehicle. The automated driving functions shown are technologies currently under development, are not available for production vehicles and only work within system limits. All possible uses of the technical systems and functions shown represent only a possible concept and are dependent on the respective legal regulations in the relevant country. Professional driver on a closed course.
09/13/21 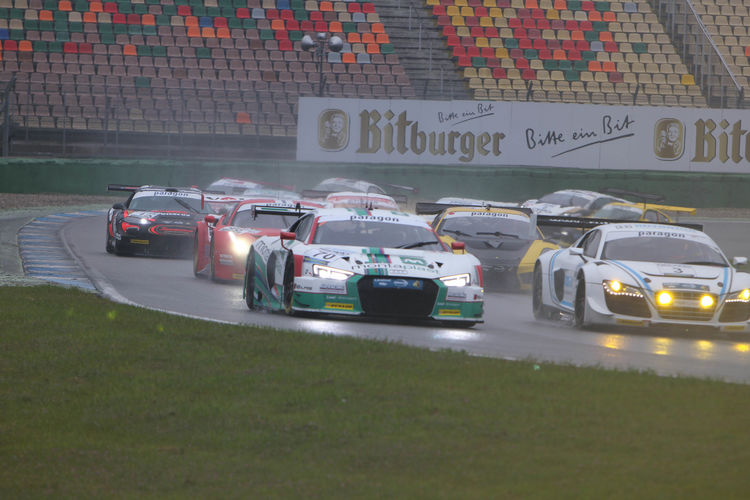 Victorious outings for Audi customer teams in Germany: in the DMV GTC, HCB-Rutronik Racing and Land Motorsport converted three pole positions into three wins. However, trophies were also welcomed in Portugal and France.

Three pole positions, three wins: Audi customer teams were in fine form at the second DMV GTC race weekend at Hockenheim. Despite the tricky conditions, pole sitter Marc Basseng (Land Motorsport) claimed first position in the opening race in an Audi R8 LMS ahead of his stablemates Fabian Plentz and Tommy Tulpe (both HCB-Rutronik Racing). As a result, Audi drivers monopolized the podium at the awards ceremony. In race two, Plentz crossed the line first in an Audi R8 LMS ultra ahead of his team mate Tulpe, who was the quickest in qualifying. In the concluding Dunlop 60, Plentz/Tulpe were unbeatable. Starting from pole position, the duo won convincingly by almost a complete lap.

Good performance in the International GT Open season opener: at the race in Estoril, Portugal, local matador César Campaniço and his team mate Andrés Saravia from Guatemala took second place in the second race. Saravia started the second race from seventh on the grid in the Audi R8 LMS ultra entered by the Drivex School team. The Audi customer team made up several places thanks to a cleverly timed driver change. After starting the last lap in fourth place, Campaniço still managed to claim a position on the podium.

Challenging Blancpain GT Series Endurance Cup season opener: in a first show of strength at Monza, the Belgian Audi Club Team WRT scored a good result with the drivers Antonio Garcia, Will Stevens and Nico Müller. In a difficult race on the traditional Italian race track, the trio started from 21st place. After the three hour race, Garcia/Stevens/Müller crossed the finish line sixth in an Audi R8 LMS. Three places further back and in the top ten were Dries Vanthoor/Frédéric Vervisch/Laurens Vanthoor in another WRT Audi.

Lucas di Grassi did not just inspire the fans as Formula E made its debut, but also extended his championship lead. The Audi factory driver started the race from second on the grid, took the lead at the first corner before controlling the seventh race of the season in convincing style. di Grassi competes in the electric racing series for the ABT Schaeffler Audi Sport squad and now sits atop the overall rankings when the German team heads to its home in Berlin on May 21.

A word from ... Philipp Mondelaers

Philipp Mondelaers is Project Leader for the Audi Sport TT Cup since the beginning of the year. He makes an initial appraisal before the Audi one-make cup season starts on May 7-8 as support event to the DTM at the Hockenheimring.

How did preparations for the season go?

Especially during the tests at Hockenheim it was clear to see just what our budding young talents can achieve on the race track. We have a very good mix of Rookies, who compete for the first time in the Audi Sport TT Cup, as well as experienced drivers. In the qualifying simulation, six drivers were within only five tenths of a second. This not only promises plenty of nail-biting action, but also plenty of different faces on the podium.

You worked for Audi Sport in the DTM and in GT racing before. What prompted your change to the Audi Sport TT Cup?

I didn’t have to think twice when Rolf Michl as former Project Leader moved into Product Marketing and I was asked if I would like to be his successor. For me, it is just the challenge I was looking for. I wanted to devote myself to something new. Being the Audi Sport TT Cup Project Leader is very exciting, and I’m really looking forward to tackling this huge task.

What’s so special about the Audi Sport TT Cup for you?

In addition to the actual program of a one-make up, training the young drivers is very mush the focus. The Audi Sport TT Cup boasts high quality content at trackside yet again in 2016. From fitness camps via nutrition plans and media training to data analysis, we give the budding young talents as much as possible on their way to forging a successful career in motorsport.

Nurturing talent is taken seriously in the Audi Sport TT Cup. Several drivers who competed in the premiere season made the jump into GT racing. Did the training plan pay off?

Most certainly. The great thing about the Audi Sport TT Cup is that competitors become visible in the world of motorsport. I see this as a clear aim of our one-make cup. The competition among the young racing drivers is already very fierce. Through the Audi Sport TT Cup, the talents can make a splash very early on and open doors for their career path while competing on the DTM support program. Obviously I’m very pleased if a GT3 team acknowledges a particular driver’s good performance and succeeds in the next step.