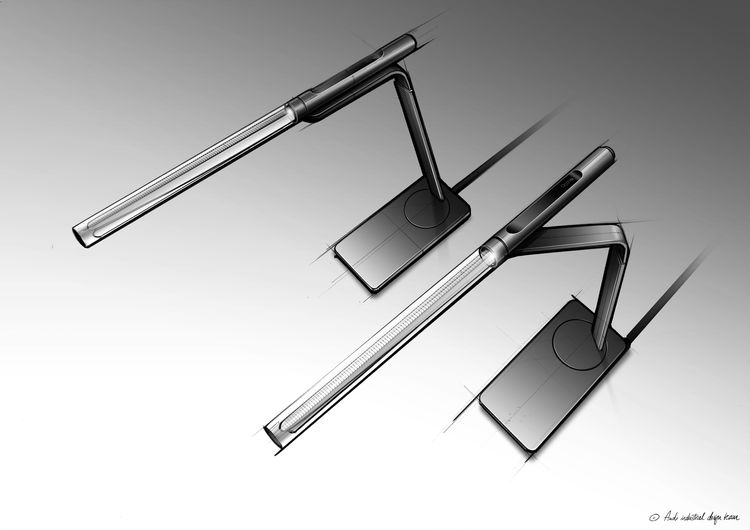 LED technology from Audi in tandem with exclusive design will soon be available for your living room. At the “Light + Building” trade fair in Frankfurt, Germany, the Audi Industrial Design team and Occhio, the Munich-based company renowned for high-quality design lighting, will celebrate the debut of their jointly developed lighting concept Sintesi.

Light is the starting point and connecting element in the partnership between Audi Industrial Design and Occhio. And the result of their alliance is the modular lighting system Sintesi, which unites Audi LED technology with the creativity and lighting expertise of Occhio. The designers have applied top-quality aluminum in an entirely original formal idiom generated by the DNA of the two brands.

The Sintesi lighting creations stand out with their slender, elegant silhouettes. Their contemporary design is combined with technical finesse and outstanding functionality. The modular systems from Occhio have a distinctive design feature: Each luminaire has one head that can be attached to different bodies. A high-precision light guide directs the LED light to ensure it is evenly distributed. The light can be switched and dimmed by gesture control directly at the luminaire head.

“The Sintesi concepts are embodiments of the interdisciplinary design standards at Audi, which go far beyond the realm of the automobile,” says André Georgi, Head of Audi Industrial Design.

Until Friday, March 18, the Sintesi lighting concept can be seen at the “Light + Building” trade fair in Frankfurt. The products will be offered by retailers starting in 2017.

It was 30 years ago that the brand with the four rings founded the Audi Concept Design Studio in Munich. The objective was to make many facets of the “Vorsprung durch Technik” experience accessible. Today the site is shared by the Automotive Design and Industrial Design teams. Led by André Georgi, the professionals at Audi Industrial Design work with partners to develop and shape innovative design concepts that emphasize the essence of the Audi brand.

Occhio is one of the most innovative companies in the lighting sector. Founded in 1999 by Axel Meise, the company started out with an idea that was simple yet revolutionary – to create a multifunctional lighting system of cohesive design that could offer the optimal solution for every conceivable spatial requirement. And since then Occhio has always stood for the latest in lighting technologies and the combination of unsurpassed light quality, unique design and maximum efficiency.