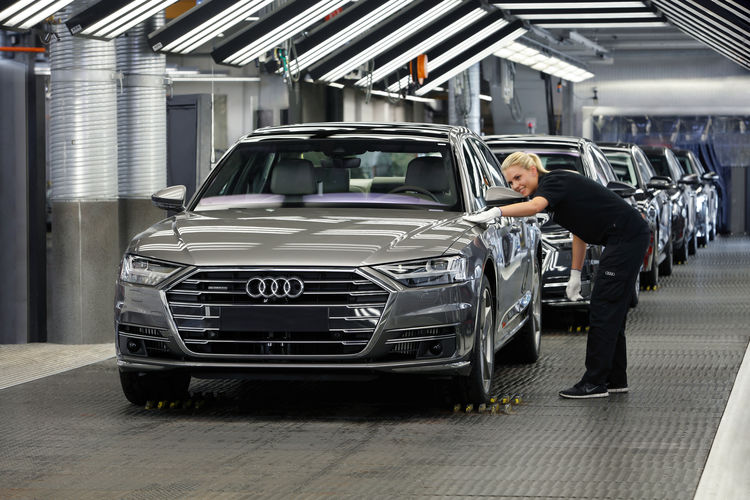 The Audi Group achieved revenue of €30.1 billion and operating profit of €2.7 billion in the first half of 2017. Audi improved its operating performance compared with the first half of last year. The operating return on sales increased to 8.9 percent and is clearly within the target corridor of 8 to 10 percent. Worldwide deliveries of Audi brand cars were lower than in the first half of 2016 following the temporary decrease in sales in China. In June, unit sales in China increased again and reached their highest ever level for the month of June. The company anticipates stronger sales worldwide in the second half of the year, while advance expenditure for new models will have a greater financial impact than in the first six months of this year.

“The world premiere of the new Audi A8 at the first Audi Summit was the start of a major rollout of new models,” stated Rupert Stadler, Chairman of the Board of Management of AUDI AG. The new generation of the Audi flagship has been developed as the world’s first series-produced car for highly automated driving, and in the form of a mild hybrid or plug-in hybrid featuring high-voltage technology it is systematically electrified in all powertrain versions. “By the middle of 2018, we will present new generations of four more core model series. In addition, we will expand our product offering in the top segments next year with the Audi Q8 and the fully electric Audi e-tron,” said Stadler.

“We achieved robust earnings in an extremely challenging first half of the year,” stated Axel Strotbek, Board of Management Member for Finance, IT and Integrity at AUDI AG. “The efficiency measures of our Speed Up! program are leading to the first successes.” For example, the company has optimized its research and development efficiency and reduced the ratio of research and development costs to revenue to 6.9 percent (H1 2016: 7.5 percent). In the long term, Audi plans to reach a level of between 6 and 6.5 percent. The effects of Speed Up! are apparent also in significantly lower distribution costs. “We will continue working on our efficiency, because our profitability target applies also in the electric era,” said Strotbek.

The Audi Group’s profit before tax increased to €2,798 million in the first half of the year due also to the significant increase in financial income (H1 2016: €2,190 million). Among other things, the entry of new investors at HERE in the first quarter of this year led to a positive effect of €183 million on income from investments accounted for using the equity method.

The net cash flow decreased to €1,879 million (H1 2016: €2,085 million). This includes anticipated payments in a triple-digit-million euro amount in connection with the diesel issue.

With a view to the rest of the year, Axel Strotbek stated, “We are preparing a whole array of model launches in parallel. This advance expenditure will be more strongly reflected in our earnings and cash flow, especially in the fourth quarter.” Capital expenditure in the first half of the year amounted to €1,156 million (H1 2016: €1,238 million), equivalent to 3.8 percent of revenue (H1 2016: 4.1 percent). For the full year, Audi anticipates a capital expenditure ratio of 5.0 to 5.5 percent.

In full-year 2017, the company plans to slightly increase its deliveries of Audi cars compared with the previous year. The Audi Group also anticipates slight revenue growth compared with 2016. The operating return on sales should be within the strategic target corridor of 8 to 10 percent.