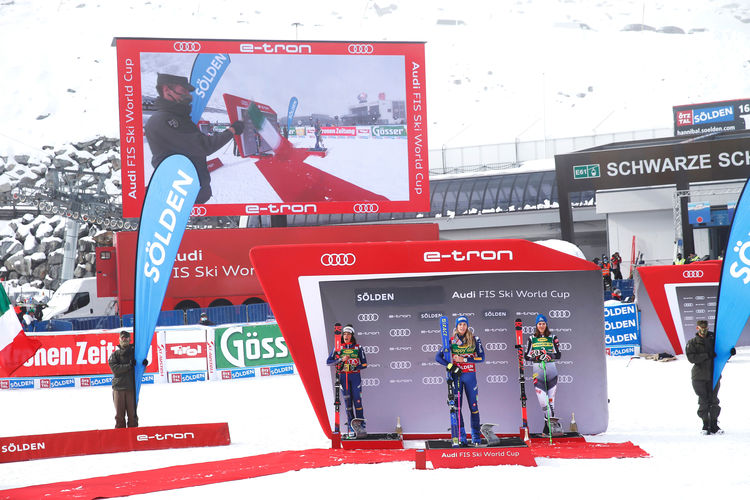 Already for the 19th time, Audi and the stars of alpine winter sports start a new season together this weekend. As the title sponsor of the Audi FIS Ski World Cup and partner of many national associations, Audi is at the side of the athletes and also presents its purely-electric Audi e-tron on snow and ice.

The best-selling electric SUV in Europe will also be in the spotlight in the new ski season: Audi will present itself with the latest e-tron branding on the flags, boards, finish arch, exit gate and leaderboard, as well as the back wall of the awards ceremony. The starting point for the races on the Rettenbach glacier in Sölden is the Audi start house, which has for many years been a striking symbol of the successful partnership.

For more than 30 years, Audi has been the main sponsor of the German Ski Association (DSV), including all of the national teams. This has not only been as a financial supporter, but also as a companion at many joint events. Audi is also sponsor and vehicle partner of many other international alpine national teams. Some of the teams benefit specifically from Audi’s technical expertise: The athletes train regularly at the Audi wind tunnel center in Ingolstadt.

The athletes in Sölden have started the new season with a giant slalom for men and women on Saturday and Sunday (October 17/18). Due to international restrictions, only events at 18 different venues are planned in total, while the organizers are completely refraining from events in the USA and Canada. Until the finale in March in Lenzerheide (Switzerland), there will be 39 races for men and 35 races for women. The highlight of the season will also be the FIS Alpine Ski World Championships in Cortina d’Ampezzo (Italy) in February, of which Audi will again be the main sponsor.