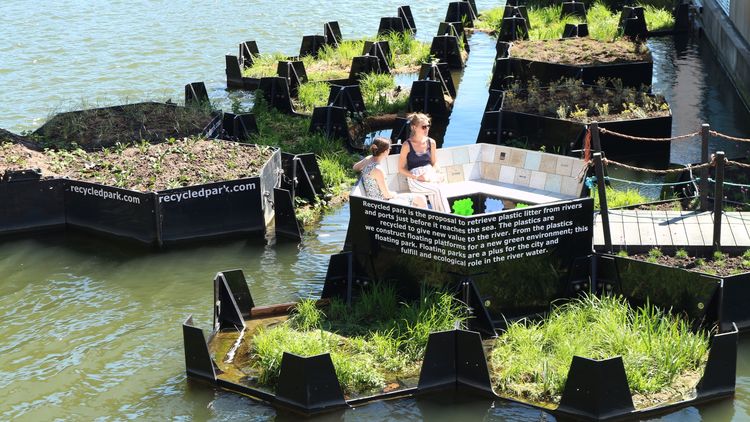 Together with project partner Recycled Island Foundation, the Audi Environmental Foundation opened a floating park in the Rotterdam port of Rijnhaven on Wednesday. To create the park, the project partner filtered plastic waste out of the New Meuse River with the aid of specially designed collecting basins. The waste was then sorted and made into floating plastic islands. The landscaped islands now serve as recreation areas for port visitors and residents.

Pollution of the oceans with plastic waste is a global problem. The Audi Environmental Foundation aims to help solve this problem together with the Recycled Island Foundation. Collecting basins in rivers and ports are to prevent plastic waste from getting into the sea in the first place. More than 98 percent of the waste floats in the first meter below the water’s surface, most of it is actually in the first half meter. This makes it possible to collect the waste in nets, and catch basins prevent it from being washed back out of the collecting basins by strong waves. The waste obtained in this way is then used by the project partners for an innovative new purpose. They produce hexagonal plastic islands using various techniques such as pressing, welding and 3D printing. These are intended to sustainably improve the habitat for the local residents, as well as for the fish and other aquatic creatures in the river.

The first floating park made of plastic waste was opened at the Port of Rotterdam on Wednesday by Rüdiger Recknagel, Director of the Audi Environmental Foundation, and Ramon Knoester, founder of the Recycled Island Foundation, as well as a selection of the main project partners such as the City of Rotterdam and Rijkswaterstaat, the Dutch Ministry of Infrastructure and Water Management.“We want to use new technologies like this to make our environment more livable,” stated Recknagel. “The recycling of plastic waste is in line with the objectives of our foundation. We are committed to a future worth living for people, animals and plants.” Knoester added: “We are grateful to have gained the Audi Environmental Foundation as a supporter and together to open the first ‘floating park’ in Rotterdam.”

The group of plastic islands in Rotterdam has a total surface area of 140 square meters. The project partners connected large plastic islands, each of five square meters, with each other and landscaped them. They can be planted with moss or even trees of several meters height. Most of the blocks have an open structure through which the plants’ roots grow. This results in a thick intermeshing of roots under the water. These spaces are ideal for algae and other aquatic plants to flourish. They also serve as a source of food for river creatures. The islands are movable and therefore highly versatile in use. They can be used as a retreat for lunch breaks, as well for example as a stage or auditorium for open-air concerts directly at the port.

Expansion of the project to other locations is already being planned. This year, collecting basins are to be installed in the Charleroi Canal in Brussels and on the Indonesian island of Ambon.

More pictures will be uploaded on www.audi-mediacenter.com in the course of the evening.