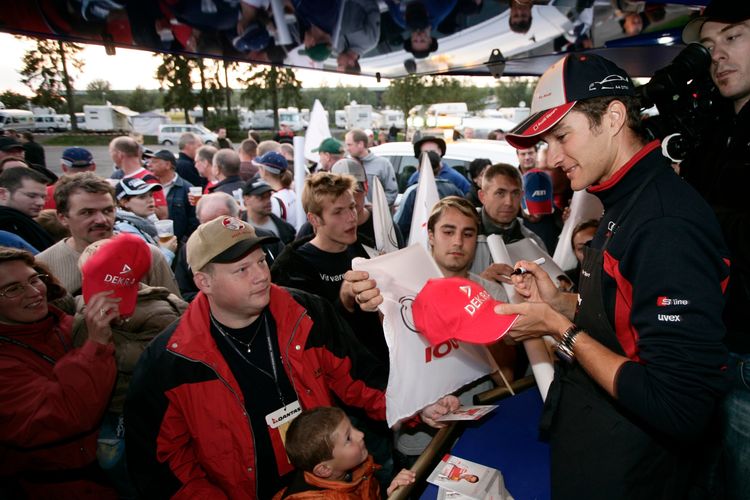 The DTM starts from the Nürburgring grid this weekend. Prominent guests including executive board members and a delegation of skiers from the DSV will visit the race in the Eifel. Timo Scheider and Martin Tomczyk will also directly mingle with the spectators at two special activities for fans.

DTM fans at the Nürburgring can look forward to a personal visit by two Audi drivers. For Timo Scheider, it has already become a cherished tradition to pour free beer on Saturday night amidst his fans – this time in the “old” paddock. Also on Saturday, Martin Tomczyk will distribute soft drinks by Audi partner Red Bull in the camping area.

A delegation of the German Ski Association (DSV) will visit Audi at the sixth DTM round. Alpine skiers Fritz Dopfer, Stephan Keppler, Philipp Schmid and Andreas Strodl have announced their attendance. Coaches Albert Doppelhofer and Charly Waibel would not miss the spectacular event in the Eifel either. Another DTM visitor will be Roland Frey, former coach of the DSV and the Swiss national team.

Two members of the AUDI AG Executive Board will attend the race at the Nürburgring: Rupert Stadler, Chairman of the Executive Board of AUDI AG, and Michael Dick, who is responsible for Technical Development.

Almost a regular guest at the DTM is TV actor and author Jumbo Schreiner, who would not miss the race in the Eifel either. Actress Liz Baffoe will also come to the Nürburgring.

TV commentator and racer Christina Surer will be active in her role as ambassador for the DTM race at Dijon-Prenois on October 11 this weekend: To promote the French DTM round at Dijon in Switzerland, the partner of Audi driver Martin Tomczyk gets to test the Audi A4 DTM at the Nürburgring. For the Swiss from Basel – as for many of her compatriots – the race at Dijon at a distance of merely about 250 kilometers is practically a home round.

At the Audi Drive Away on Sunday, 30 Audi A5 cars will take to the track in a parade. The vehicles will be handed over to the dealers by Sales Germany at the Nürburgring.

The Audi VIP guests can look forward to a party at the Audi Lounge on Saturday night. The band “Trio Washington” and DJ “Guido la Vespa” will offer superb entertainment.

Audi Sport Team Phoenix, which has been in existence for ten years and is based at the Nürburgring, invites numerous guests to a typical “Cologne Evening” on Friday night on the occasion of the official opening of the Phoenix Racing Store Nürburgring at the new ring°boulevard. Guests can look forward to culinary specialties and music from Cologne.

Racing for a good cause – Audi “factory” driver Timo Scheider yet again proved that in addition to a special feel for the wheel he has a big heart for social causes. At the “Race-4-Kids,” a kart race at the Friedrichshafen trade fair grounds, 28 kart teams competed for a charitable purpose. Timo Scheider, his Audi teammates Markus Winkelhock and Katherine Legge as well as prominent guests from sport and society raised a total amount of over 40,000 euros for the “Stunde des Herzens” (Hour of the Heart) charity.