Skip to content
Please participate in our survey and help us improve the Audi MediaCenter. Thank you!
Go to survey
09/05/22
Neuburg a. d. Donau
Motorsport 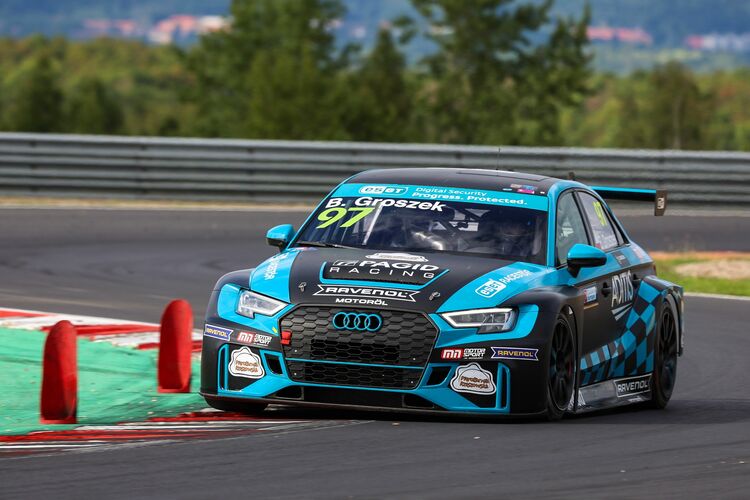 Bartosz Groszek TCR Champion in Eastern Europe: For the first time, an Audi Sport customer team won the TCR Eastern Europe. With 23 drivers classified, the series held in six Eastern European countries was particularly strong this year. Bartosz Groszek had traveled to Most for the finale with a two-point advantage. After the driver of the Aditis Racing team finished fourth in the first sprint with his Audi RS 3 LMS, he fell one point behind title rival Petr Semerád. In the decisive second race on the Czech circuit, the tension was then high: Groszek was initially ahead of Semerád, then the Hyundai driver overtook him until Groszek again moved ahead of Semerád. Finally, on the fifth lap, his pursuer had to retire with a technical issue. Thus, another fourth place was enough for the Polish privateer to lead the overall standings. In the end, Bartosz Groszek clinched the first title of an Audi TCR customer in the 2022 season with an eleven-point advantage. For the Audi RS 3 LMS, it was already the 25th international drivers title since 2017.

First success of the season in Italy: Denis Babuin achieved his first victory with the Audi RS 3 LMS in the TCR Italy. On the fifth race weekend of the touring car racing series with a very good field of 34 entrants, two Audi RS 3 LMS cars started from the front row: Matteo Poloni was in first place in the second race for BF Motorsport, Denis Babuin for Bolza Corse alongside. Poloni led the field for 14 laps until Babuin took over the top spot, winning by 0.253 seconds after 16 laps. Babuin thus moved up from fourth to third in the standings.

Double victory at Hockenheim: The Saintéloc Junior Team won the fourth round of the Fanatec GT World Challenge powered by AWS Endurance Cup at Hockenheim. The two Audi Sport drivers Christopher Mies and Patric Niederhauser shared the victorious number 25 Audi R8 LMS with Swiss privateer Lucas Légeret. After Légeret had started the race from sixth place on the grid, Mies took over the cockpit in the second part of the competition. He quickly improved to third place. When he put pressure on the man in front of him, Steijn Schothorst, in a Mercedes-AMG, the Dutchman made a mistake and Mies took over second position. Just two seconds behind the leader, the German handed the car over to Patric Niederhauser for the final sprint of the three-hour race. The Swiss returned to the track in first place and ultimately won by 2.6 seconds. For Audi Sport customer racing, it was the second endurance season victory after Team WRT’s opening success at Imola. Second place at Hockenheim went to the driver trio of Dennis Marschall/Kim-Luis Schramm/Markus Winkelhock from Attempto Racing. Marschall had secured second place 13 minutes before the end when he overtook his Audi Sport driver colleague Christopher Haase. Team WRT also had reason to celebrate at the fourth of five rounds of the season: Benjamin Goethe/Thomas Neubauer/Jean-Baptiste Simmenauer won the Fanatec Endurance Silver Cup early while WRT secured the team classification in this category.

Four wins in China GT: The FAW Audi Racing Team managed a perfect weekend in the China GT Championship. The Pro-Am driver pairing Cheng Congfu/Chris Chia won each of the four one-hour races in the Audi R8 LMS at Ningbo. As a result, Chia also took the lead in the Audi Sport Asia Trophy for Audi privateer drivers in the Asian region.

Two successes for the Uno Racing Team: In the Chinese GT Super Sprint Challenge race series, the Uno Racing Team with Audi remained unbeaten on the third weekend at Zhuhai. The privateer driver with the pseudonym Rio celebrated his fourth victory of the season in five races with a ten-second lead in the first sprint. Ray Wu from Team YC Racing scored another trophy in third place. In the second sprint, Rio again prevailed by one second over his pursuers in the Mercedes-AMG. After three of five events, Rio has extended his lead in the standings to 38 points.

Victory at season opener: Sam Fillmore and Jonny Reid managed a narrow victory at the season opener of the South Island Endurance Series in New Zealand at Ruapuna. After three hours of racing, the two local privateers crossed the finish line 1.629 seconds ahead of the McLaren of Andrew Fawcett/Daniel Gaunt. Various damages and spins had caused several position changes in the leading field during the endurance race. In the end, Reid successfully fended off attacks from Gaunt, who was faster on a fresher set of tires but couldn’t find a way past. Even a slow puncture did not prevent Reid from winning.

High-tension after first and second place: On the fifth race weekend of the GT4 European Series, the two Audi customer teams Saintéloc Racing and Team Speedcar scored a double success in Sunday’s race at Hockenheim. Roee Meyuhas and Erwan Bastard in the Audi R8 LMS GT4 celebrated their second success of the season five weeks after their previous triumph at Spa. After Bastard had opened up a lead of almost ten seconds, a safety car period negated all efforts. When teammate Meyuhas took over, race control neutralized the contest again with a safety car. As a result, the Silver Cup driver pairing was under pressure from Speedcar drivers Robert Consani and Benjamin Lariche until the end of the one-hour race on the Baden circuit. In the end, the two Audi teams were separated by just 0.392 seconds. Before the finale, the Hockenheim winners Bastard/Meyuhas as the runners-up in the standings moved to within 18 points of the championship leaders Enzo Julie/Lluc Ibanez, who had to cope with a retirement. With up to 52 points per race weekend for the most successful team, the title fight is wide open at the finale in Barcelona at the end of the month.

Two top results in China: Vincent Lin used the third round of the GT Super Sprint Challenge in China to further extend his lead in the GT4 standings. He won his class in the first race at Zhuhai with a 6.3 second advantage in the Audi R8 LMS GT4. In the second race, the driver of the Absolute Racing team finished third in his class as the best Audi privateer. After a total of three wins this season, Lin leads the GT4 standings with a 65-point advantage.

Second podium of the season: Team Hitotsuyama Racing scored a podium finish in the Super Taikyu Series for the second time this year. After finishing third at the 24 Hours of Fuji, the longstanding Audi customer team took trophies at Motegi as well. Masaki Ano/Yuki Ano/Seiya Jin/Ritmo Miyata finished third in the ST-Z class after five hours of racing in the Audi R8 LMS GT4.