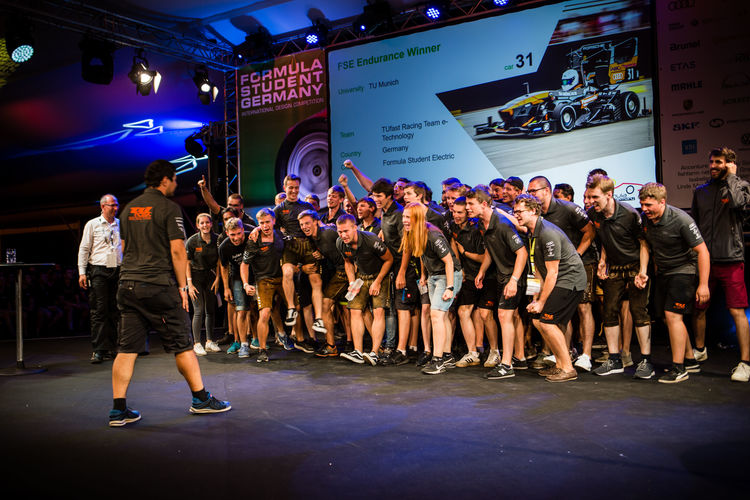 After five grueling days of competition at the Hockenheimring, the Audi-sponsored racing team from the Technical University (TU) of Munich won first place in the Electric category of Formula Student Germany, emerging triumphant over 39 other teams.

From August 7 to 11, the Hockenheim race circuit once again provided a showcase for the ingenuity and pioneering spirit of the students taking part in the international competition, featuring roughly 3,500 participants from 24 countries. This year, Audi sponsored the teams from TU Munich and TU Eindhoven, which lined up on the grid with three cars in total, entering the Electric and Driverless categories.

In addition to its overall victory in the Electric category, the TUfast team set a new record in the Skid Pad discipline, stopping the clock at 4.60 seconds. This event involves driving around a figure eight while achieving the best possible lateral acceleration and lap time. The team from TU Eindhoven made it into the top five in the Electric category.

“Congratulations to the winners! We are extremely proud of the students, who demonstrated exceptional ability and kept cool heads once the competition got started,” said Susanne Gawor, head of Employer Branding. “Electric drive systems and autonomous driving are our most important fields of cutting-edge development. That’s why it’s so crucial to us to help the students to build up their knowledge in these areas and identify talented young people who show pioneering spirit.”

Since 2007, Audi has been supporting young people with a talent for development with their participation in Formula Student. In this competition, experts from the company act as judges and help the student teams out in the pit lane and on the track with advice and plenty of experience.

In Hockenheim, the TUfast team took its third victory in the Electric category, following its appearances in this year’s Formula Student East and Formula Student Austria.

Eva Herrmann, team manager for the TUfast Racing Team, commented, “The pressure really was on here. We are absolutely delighted about our first Electric win against some tough competition at Hockenheim and are incredibly proud of our Skid Pad record. Every single person on the team has played a part in this fantastic result. Thanks also to our long-standing partner Audi, which has been believing in us since 2007.”

The TUfast team will be taking to the track once again for Formula Student Spain in Barcelona from August 20 to 26. We wish them luck!