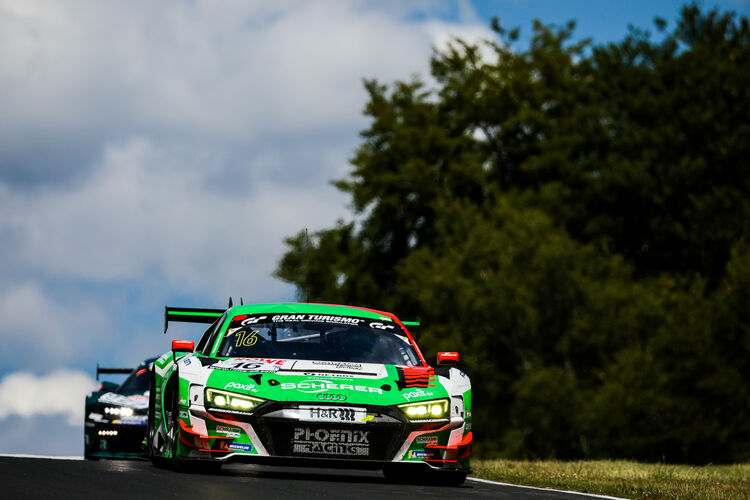 Audi Sport customer racing had every reason to celebrate with its customers on the last weekend in June: GT3 victories on the Nordschleife and in Poland, a GT4 success in the USA and six TCR wins in three countries characterized the race weekend. A successful appearance by the 24-hour Nürburgring winning car at the Goodwood Festival of Speed rounded off June.

First victory of the season in the Nürburgring Langstrecken-Serie: Scherer Sport Team Phoenix experienced a dream weekend at the third event of the popular racing series on the Nordschleife. Polish privateer Kuba Giermaziak, together with René Rast, managed a narrow victory in a thrilling 4-hour race. A BMW team put Rast under pressure in the closing stages, but the three-time DTM champion held on. He outpaced his pursuers in the heavy traffic of still 94 competitors at the end and crossed the finish line with a lead of 4.6 seconds. For the German and his Polish teammate, it was the first overall victory in a round of the NLS. Privateer Vincent Kolb and Audi Sport driver Frank Stippler brought home another trophy for Scherer Sport Team Phoenix. The two Germans steered their Audi R8 LMS to third place overall.

High-tension in the ADAC GT Masters: After three of seven rounds of the German GT3 racing series, there is a tie at the top of the standings between Audi privateer Jusuf Owega and his rivals Christian Engelhart/Güven Ayhancan in a Porsche. In the first of two races at Zandvoort, Owega and Audi Sport driver Ricardo Feller completed a closed Audi trio at the finish – the two drivers of the Montaplast by Land-Motorsport team finished from sixth on the grid in fourth position behind two other R8 LMS cars. But the headlines of the race were written by Kim-Luis Schramm and Audi Sport driver Dennis Marschall: From eighth place on the grid, the two Rutronik Racing drivers improved to second place in rain that had fallen shortly before the race started. Simon Reicher and Norbert Siedler also had reason to celebrate. The two Austrians advanced from grid position six in the Audi R8 LMS to third place. This marked the first podium finish for the Eastalent Racing Team. In the second race, Thierry Vermeulen achieved his best result in the ADAC GT Masters so far. At his home race, the Dutchman improved from the fourth starting position to second place together with Audi Sport driver Mattia Drudi for Car Collection Motorsport.

Undefeated in Poznaň: The third weekend of the Eset Cup produced the maximum result for Audi’s customers in Poland. Marcin Jedlinski won the first sprint on the Poznaň circuit in the Audi R8 LMS from Olimp Racing with an 11.8-second advantage. Third place went to Robin Rogalski from Team Seyffarth Motorsport, who also drove an R8 LMS. In the 60-minute endurance race that followed, Rogalski prevailed by 5.2 seconds at the head of the field. The weekend was rounded off by a second sprint victory in the Central European racing series. Rogalski was again invincible, crossing the finish line with a 12.1-second lead.

An appearance worth seeing at Goodwood: Four weeks after its overall victory at the Nürburgring 24 Hours, Audi Sport Team Phoenix’s Audi R8 LMS made an appearance at Goodwood. At the legendary Festival of Speed, Audi Sport driver Pierre Kaffer showed the GT3 sports car, which had been left in its original patina, to a large audience during demonstration drives. The event combines historic with modern racing and has long enjoyed cult status among a worldwide fan base.

Class victory in the USA: On the seventh race weekend of the Trans Am, Team Ave Motorsports was delighted with a class win. Seth Lucas prevailed in the GT class on the Mid-Ohio circuit in the Audi R8 LMS GT4 with a one-lap lead over pursuer Jack Rinke in a Chevrolet Camaro.

Second place in Great Britain: Steller Motorsport returned from the fourth race weekend of the British GT Championship with a trophy. Richard Williams and Sennan Fielding secured second place in the first race in a field of 13 class contenders with the Audi R8 LMS GT4. It was already the fourth podium result for the two Brits this season.

On the podium twice in Spain: Pierre Arraou climbed the podium in both races in the Campeonato de España de Resistencia. The Frenchman was second best in his class in the first race in his Audi R8 LMS GT4 and finished third in the second race.

First win of the season in the FIA WTCR: Gilles Magnus clinched the first victory of the 2022 season in the WTCR – FIA World Touring Car Cup with Comtoyou Team Audi Sport at the fourth event. The Belgian, who has been an Audi Sport driver since this year, had prevailed over team-mate Nathanaël Berthon in qualifying at Aragón and started the first sprint from first place. In a race that was open to the end, Magnus in the Audi RS 3 LMS kept the Briton Rob Huff behind him by 0.393 seconds. With the second overall victory of his WTCR career, Magnus improved from eighth position to second place in the standings behind Mikel Azcona.

Double victory on the Nordschleife: Two Audi RS 3 LMS determined the action in the TCR class at the third round of the Nürburgring Langstrecken-Serie. For the first time, Scherer Sport had brought an Audi RS 3 LMS gen II to the grid. The experienced Nürburgring drivers Benjamin Leuchter, Christoph Breuer and Andreas Gülden had a one-lap lead on their debut for the team on the more than 24-kilometer track. Second place went to Team Møller Bil Motorsport, another Audi customer. The Norwegians Atle Gulbrandsen/Kenneth Østvold/Håkon Schjærin had shared a first-generation Audi RS 3 LMS.

Successful home race: Bartosz Groszek was in top form at his home race in the TCR Eastern Europe in Poznaň. The Pole steered his Team Aditis Racing Audi RS 3 LMS to second place in the first sprint. In the second race, the leader of the standings clinched his second victory of the season on the track near the western Polish city of Poznaň by four seconds.

Three wins in Poland: Jakub Franek remained unbeaten in his Audi RS 3 LMS at Poznaň. In the third round of the Eset Cup, the Pole won the D4 class in both sprints. In the two-hour endurance race of the Mistrzostwa Polski Endurance series, he again decided his class in his favor at the same event.

Podium in Denmark: The Audi customer team Dan Agro Racing achieved a podium result in the Danish Endurance Championship with the Audi RS 3 LMS. On the second race weekend, Stefan Lorenzen finished the second 50-minute race at the Jyllandsringen in third place in a field of ten class contenders.

Two trophies in Spain: The drivers Jorge Silva/Pedro da Silva recorded two podium results at the third round of the Campeonato de España Resistencia. The two Portuguese drivers clinched second and third place in their class at the Aragón circuit in the Audi RS 3 LMS fielded by Veloso Motorsport.