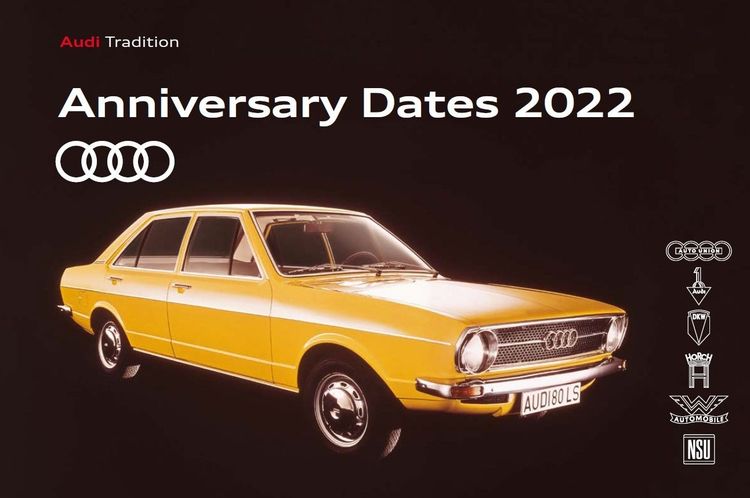 In 2022, a lot remains uncertain – by contrast, however, Audi's historical highlights for 2022 are already set. With the digital booklet “Anniversary Dates 2022,” Audi Tradition is passing on the most important information about Audi’s product and company history. Outstanding for 2022: the predecessor of the Audi A4, the Audi 80, came on the market 50 years ago. That was 1972. Additionally, the Audi logo is celebrating its 90th birthday; the four rings recall the merger of four companies, namely Audi, DKW, Horch, and Wanderer, and the accompanying establishment of the Auto Union AG in June 1932. The digital anniversary booklet provides an overview of all 2022 Audi anniversary dates; it is now available for download from the Audi MediaCenter.

It was intended to be “modern, but not trendy,” a down-to-earth and inexpensive family car. The company hit the bull’s eye in 1972 with the Audi 80, known internally as the “B1.” As in racecar construction, Ludwig Kraus, the head developer at the time, had his employees check every part to see where weight could still be reduced. And so the very lightly constructed Audi 80 sparkled with sporty handling and low consumption – which, in 1973 at the start of the oil crisis, made it exactly the right car at the right time. Designer Hartmut Warkuss helped shape the design in 1970s new objectivity style. He left his mark on Audi design across several generations of models from the B, C, and D series.

Curious yet? A lot of exciting details about Audi’s 28 historical highlights for the coming year are available right now in the “Anniversary Dates 2022” booklet.