Skip to content
Please participate in our survey and help us improve the Audi MediaCenter. Thank you!
Go to survey
01/30/20
Ingolstadt
Company 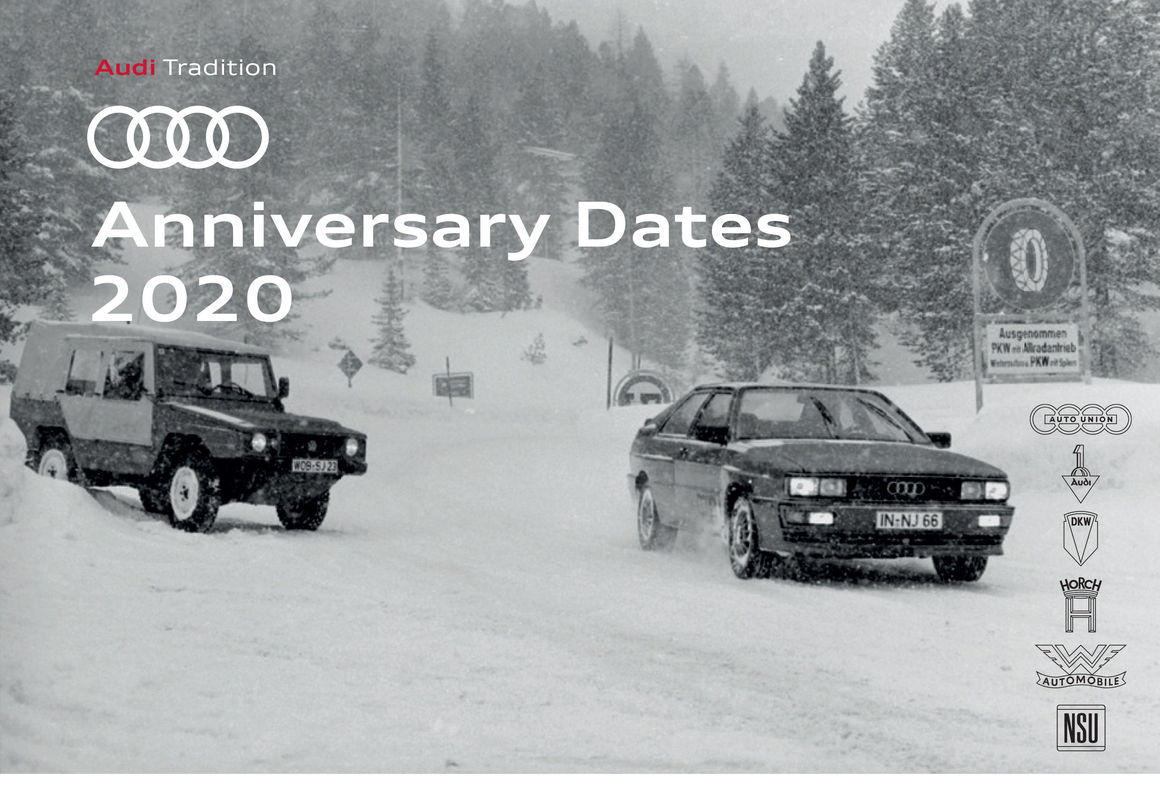 Audi Tradition has released its latest "Anniversary Dates 2020" digital booklet which provides you with the most important dates concerning Audi's company and product history. This year, there are around three dozen anniversary dates to keep in mind.

40 years ago, the company with the four rings presented the Audi quattro and in doing so caused quite a stir at the Geneva International Motor Show. This was the first time ever that a high-performance, sporty Coupé (147 kW/200 hp) was available with all-wheel drive – a drive concept which was previously only reserved for use in trucks and off-road vehicles. The idea arose in the winter of 1976/77 during test drives for the VW Iltis off-roader which Audi was developing for the German army. The excellent driving characteristics of this model on ice and snow led the engineers to the idea of installing an all-wheel drive system in a series-production Audi 80. Its motorsport debut in the Audi quattro came a year later and revolutionized the international rally scene.

20 years ago, AUDI AG won the 24 Hours of Le Mans for the first time. Since the beginning of this century, the brand has gone on to bring home a total of 13 victories. 30 years ago saw the premiere of the Audi V8 in the DTM German Touring Car Championships, where the car would go on to win the season. 25 years ago, the brand from Ingolstadt presented its Coupé concept for the Audi TT at the IAA in Frankfurt. 110 years ago, the first Audi car was launched on the market: the 10/22 PS. Called the Typ A internally within the company, the Phaeton was developed by August Horch and Hermann Lange. 70 years ago in August 1950, the first DKW passenger car since the Second World War rolled off the production line in the then Düsseldorf plant. It's also been 50 years since the Ingolstadt location's technical development building was ready for the team to move in.

A complete overview can be found in the anniversary booklet online in the Audi MediaCenter.