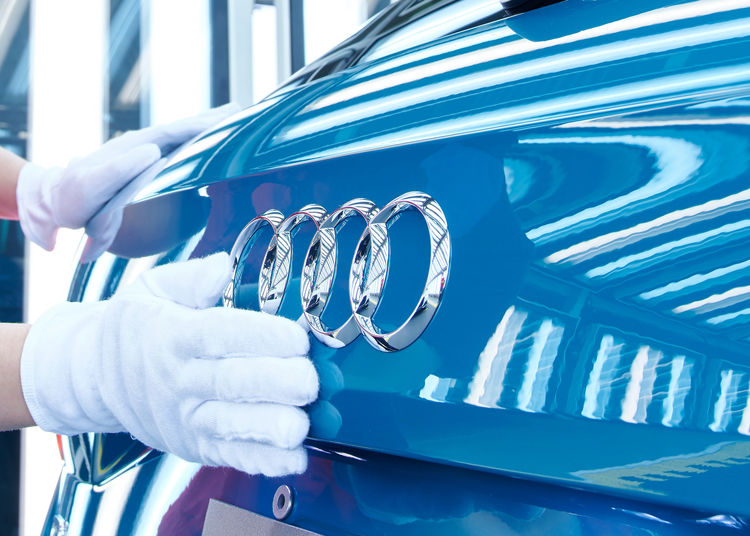 As expected, the Audi Group has embarked upon a very challenging financial year 2019. First-quarter revenue and operating profit decreased compared with the high levels of the previous year. At 8.0 percent, the operating return on sales was within the range of 7 to 8.5 percent that had been forecast for 2019, but was below the long-term target corridor of 9 to 11 percent. Adverse factors in the current financial year are primarily due to the repercussions of the WLTP changeover, the transition to new generations of numerous models and the difficult economic environment. In 2019, Audi is entering the era of electric mobility and will continue to make high advance expenditure in future-oriented fields in the coming years. With its strategic realignment, the Audi Group therefore aims to achieve sustained growth in productivity and profitability.

From January through March, the company delivered to customers 447,247 cars of the Audi brand, which is 3.6 percent fewer than a year earlier (2018: 463,750). While further growth was achieved in China (+3.3%) despite the negative overall market, deliveries in Europe decreased (-5.5%). This was still due to the temporarily limited availability of the model range as a result of the WLTP changeover, which was particularly pronounced in the second half of 2018. Meanwhile, Audi has almost all engine-transmission variants back in its portfolio. In addition, Audi continues to manage the transition to new generations of numerous high-volume models in 2019. For example, the market ramp-up of the new A6 L in China started in January.

The Audi Group’s revenue in the first three months of the year amounted to €13,812 million (2018: €15,320 million). The year-on-year decrease is mainly attributable to the new reporting structure of the Audi Group implemented in January 2019. Due to the previous inclusion of several multi-brand import companies, Audi’s consolidated financial statements also included revenue from the sale of cars of other Volkswagen Group brands in previous years. These are now reported at Volkswagen Group level for the first time as of 2019. By contrast, the Q8 and the Audi e-tron recently launched in the full-size segment had a positive impact on revenue in the first quarter. At Lamborghini, the same applies to the super SUV model, the Urus; overall, the Italian brand’s revenue almost doubled compared with the first quarter of 2018.

For the first quarter of this year, the Audi Group posted operating profit of €1,100 million (2018: €1,300 million). In addition to the lower sales volume, earnings were adversely affected by the phase-out and ramp-up situation of important models as part of the ongoing product initiative, as well as by higher advance expenditure for new technologies. The operating return on sales fell to 8.0 percent (2018: 8.5 percent). The revenue-reducing effects from the deconsolidation of the multi-brand importers had a positive impact on the return ratio and dampened its decline.

“The start to this year has also shown that we are currently some distance away from our own targets. We must achieve swift and substantial progress with our cost structures to make 2019 a turning point for Audi,” says Alexander Seitz, Member of the Board of Management for Finance, China and Legal Affairs at AUDI AG. “Especially in times of radical technological change, it applies more than ever that to develop premium products, we need a premium margin. So with our Audi Transformation Plan, we’re going to shift up a gear.”

The company started deliveries of the all-electric Audi e-tron in Europe in March, presented the Q2 L e-tron specifically for China at Auto Shanghai 2019 in April, and will have the world premiere of its third e-model with the Audi e-tron Sportback before the end of the year. From 2019 until the end of 2023 alone, Audi plans approximately €14 billion of advance expenditure for electric mobility, digitalization and highly automated driving. This includes investments in property, plant and equipment as well as research and development expenditure. Overall, the total expenditure earmarked for the five-year planning period amounts to about €40 billion.

To finance its future course, Audi increased the targets for its transformation plan at the beginning of 2019 and now aims for positive earnings effects totaling €15 billion in the period of 2018 through 2022. In a supplementary work package of the program, the company’s capital employed is to be optimized. As part of its realignment, the Audi Group is adjusting, among other things, the future allocation of model lines to the plants with the efficient bundling of vehicle architectures, as well as the corresponding distribution of tasks and capacity development in the international development and production network.

Even under the difficult conditions of the first quarter, the Four Rings generated a significantly positive net cash flow of €1,207 million (2018: €1,919 million). Compared with the higher prior-year figure, a negative one-time effect affected cash inflows in connection with the deconsolidation of the multi-brand importers. Moreover, there had been a positive impact in 2018 from changes in equity interests in the HERE mapping service provider.

For full-year 2019, the company continues to forecast a moderate increase in deliveries by the Audi brand and anticipates growth impetus especially in the second half of the year. Delivery figures will also reflect the reduction of inventories in the sales and retail organization, which were specifically built up for the WLTP changeover. The Audi Group therefore anticipates a slight increase in revenue. In transition year 2019, the operating return on sales is expected to be between 7.0 and 8.5 percent and the net cash flow between €2.5 and €3.0 billion.

Fuel consumption of the models named