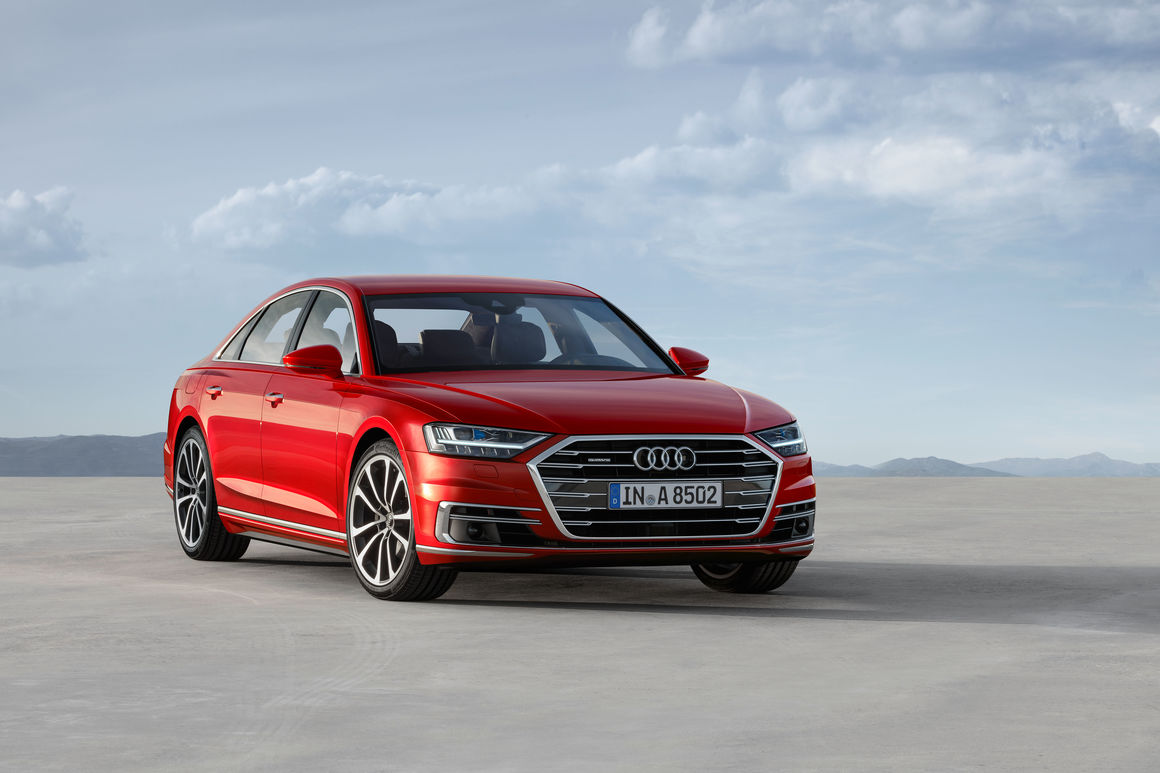 The fourth generation of the Audi A8 again provides the benchmark for Vorsprung durch Technik – with a new design language, an innovative touchscreen operating concept and a systematically electrified drive. The luxury sedan is also the first production automobile in the world to have been developed for highly automated driving.

The fourth generation of the Audi A8 again provides the benchmark for Vorsprung durch Technik – with a new design language, an innovative touchscreen operating concept and a systematically electrified drive. The luxury sedan is also the first production automobile in the world to have been developed for conditional automated driving.

The fourth generation of the Audi A8 again provides the benchmark for Vorsprung durch Technik – with a new design language, an innovative touchscreen operating concept and a systematically electrified drive. The luxury sedan is also the first production automobile in the world to have been developed for conditional automated driving.

Exterior design
The Audi A8 is stylistically defining – it signals the dawning of a new design era for the entire brand. The front end with the wide, upright Singleframe grille and the fluid, muscular body symbolize sporty elegance, sophistication and progressive status. The A8 delivers on the promise made by the Audi prologue design study. The luxury sedan possesses a powerful presence – whether in the 5.17 meter (17.0 ft) standard version or the A8 L, which has a 13 centimeter (5.1 in) longer wheelbase.

The Audi brand is renowned worldwide for sports appeal, lightweight construction and quattro permanent all-wheel drive – and the design of the A8 conveys these values. The balanced proportions emphasize all four wheels in equal measure. Muscular shapes above the wheel arches give visual expression to the quattro drive. Viewed side-on, the upright front end combined with the gently inclined rear create visual tension. The flagship model proclaims its identity both day and night, drawing on both the striking HD Matrix LED headlights with Audi laser light, and the LED light strip combined with OLED technology rear lights. These produce unique light animations as the driver approaches and leaves the car.

Interior, controls and infotainment
The A8 resembles a lavish, spacious lounge. A reduced design was chosen for the interior, with the instrument panel largely devoid of buttons and switches. At the center of the new operating concept is a 10.1-inch touchscreen display that, when off, blends almost invisibly into the high-gloss black bezel of the instrument panel thanks to its black-panel look. When the system is started, the user interface featuring new, concise graphics appears.

With a resolution of 1,540 x 720 pixels, the now gently curved TFT screen provides very sharp images and high contrast, even when viewed from an angle. The menu structure is intuitive and flat, like with a modern smartphone.

The driver controls the infotainment system with fingertip control on the large display. They can use a second touchscreen display on the center tunnel console to access the air conditioning and comfort functions as well as to enter text. When the driver activates a function in the upper or lower display, they hear and feel a click by way of confirmation. The combination of acoustic and tactile feedback along with the use of common touch gestures such as swiping make the new MMI touch response especially safe, intuitive and quick to use.

On top of that, the new, natural speech control turns the A8 into an intelligent conversationalist. The driver can freely formulate commands. The clever dialogue manager asks questions, if necessary, allows corrections, offers choices and also accepts being interrupted. Information on destinations and media is either available on board or is delivered from the cloud at LTE speed. The extensively optimized navigation is another new feature: It is self-learning, based on the routes driven previously. This provides the driver with intelligent search suggestions. The map also incorporates highly detailed 3D models of major European cities for a more realistic representation.

The latest version of the Modular Infotainment Platform, the MIB 2+, serves as the control hub for all these functions. It integrates a cutting-edge K1 processor by the Audi venture partner NVIDIA. A second K1 chip generates the graphics on the Audi virtual cockpit, which as the digital instrument cluster offers a full HD resolution of 1,920 x 720 pixels.

And the Bang & Olufsen Advanced Sound System delivers a new spatial experience by bringing its fascinating 3D sound to the rear seats for the first time. It is matched by a new standard of telephony in the A8 thanks to Audi phone box and Voice over LTE – a standard the user will experience both in operation and in the sound and connection quality.

The classiest seat in the Audi flagship model is in the rear right – the optional relaxation seat in the A8 L that comes with four different adjustment options and a footrest. In this seat, the passenger can warm and massage the soles of their feet on a unit with multiple settings incorporated into the back of the front-passenger seat. The rear passengers can also control an array of functions such as ambient lighting, the new HD Matrix reading lights and seat massage, plus make private phone calls, via a separate operating unit. The rear seat remote, with its OLED display as large as a smartphone, is a removable unit housed in the center armrest.

Drive system
The A8 starts out in the German market with two extensively reengineered V6 turbo engines: a 3.0 TDI and a 3.0 TFSI. The diesel develops 210 kW (286 hp), and the gasoline version 250 kW (340 hp). Power is transferred via an eight-speed tiptronic that delivers fast and smooth gear shifts. The electronically controlled automatic transmission is paired with quattro permanent all-wheel drive.

For the first time, the Audi A8 comes standard with an electrified drivetrain. To that end, all of the engines are equipped with mild hybrid technology. This enables coasting with the engine switched off and a smooth restart. It also has an extended start/stop function and an energy recovery output of up to 12 kW. The combined effect of these measures is to bring down the fuel consumption of the already efficient engines even further – by as much as 0.7 liters (0.2 US gal) per 100 kilometers (62.1 mi) in real driving conditions. The key element for this is the 48-volt electrical system, which in the A8 serves for the first time as the primary electrical system.

Suspension
With a whole package of innovations, the suspension revisits the very limits of what is physically possible. One such innovation is dynamic all-wheel steering, which combines direct, sporty steering with maximum stability. The steering ratio for the front wheels varies as a function of speed; the rear wheels are turned in or against the direction of steering depending on the speed range. The car’s handling becomes even more dynamic and precise with the sport differential. This actively distributes the drive torque between the rear wheels, complementing the quattro permanent all-wheel drive that is now standard in the A8.

The second new technology, the Audi AI active suspension, is a fully active, electromechanical suspension system that works together with the adaptive air suspension. It uses electric actuators to increase or decrease the load on each wheel individually as a function of the driver’s wishes and the driving situation for active and optimal control of the body.

This flexibility imparts the driving characteristic with huge latitude – ranging from the smooth ride comfort of a classic luxury sedan to the dynamism of a sports car.

In combination with pre sense 360°, the Audi AI active suspension quickly raises the body in the event of a pending side-impact collision. The other vehicle strikes an even stronger zone of the A8 as a result, which mitigates the potential consequences of the accident for the occupants.

conditional automated driving at Level 3. The Audi AI traffic jam pilot takes charge of driving in slow-moving traffic at up to 60 km/h (37.3 mph) on highways and freeways where a physical barrier separates the two carriageways. The system is activated using the AI button on the center console.

The traffic jam pilot handles starting from a stop, accelerating, steering and braking in its lane. When the system is active, the driver can take their foot off of the accelerator and their hands off the steering wheel for longer periods. Depending on applicable national regulations, the driver can pursue other activities supported by the on-board infotainment system. As soon as the traffic jam pilot reaches its limits, it prompts the driver to take back control of the task of driving.

From a technical perspective, the traffic jam pilot is revolutionary. During piloted driving, a central driver assistance controller (zFAS) now permanently computes an image of the surroundings by merging the sensor data. In addition to the radar sensors, a front camera and the ultrasonic sensors, Audi is the first car manufacturer also to use a laser scanner. Introduction of the Audi AI traffic jam pilot requires both clarity regarding the legal parameters for each individual country and specific application and testing of the system. The brand’s high claim to quality also applies to conditional automated driving. In addition, different approval procedures worldwide and their corresponding time limits must be kept in mind. For these reasons, Audi is planning a gradual introduction of the traffic jam pilot in the A8.

The Audi AI remote parking pilot and the Audi AI remote garage pilot autonomously steer the A8 into and out of a parking space or a garage, while the maneuver is monitored by the driver. The driver need not be sitting in the car. The respective system is started via smartphone using the new myAudi app. To monitor the parking maneuver, the driver holds the Audi AI button in the app pressed. A live image from the 360 degree cameras is shown on the smartphone display. Once the maneuver has been completed, the system automatically engages the tiptronic P position and switches off engine and ignition.