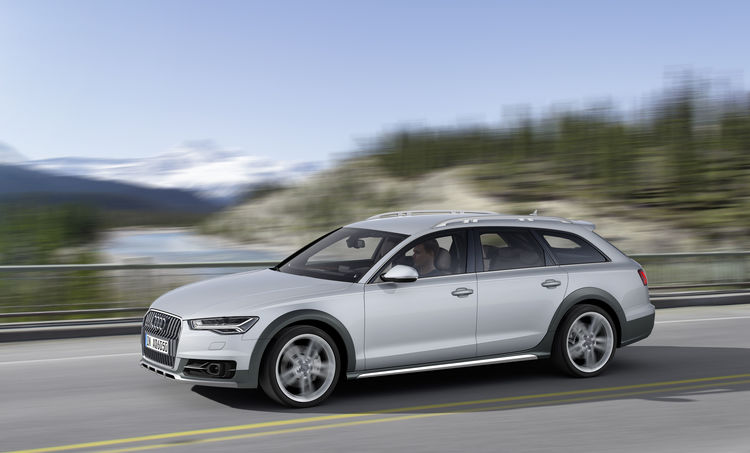 The Audi A6 allroad quattro (combined fuel consumption in l/100 km: 6.5 - 5.6*; combined CO2 emissions in g/km: 172 - 149*) is a resounding success, as confirmed by readers of “Auto Bild Allrad,” Europe’s largest all-wheel magazine. With the “All-Wheel Drive Car of the Year” contest, they chose the raised Avant with quattro drive as the winner in the “Crossover” category. The award ceremony took place on the evening of April 18 in Frankfurt am Main.

With the “All-Wheel Drive Car of the Year” survey, “Auto Bild Allrad” readers gave their verdict on 219 models in ten categories. Readers could cast a vote for their favorite in each vehicle class. In the “Crossover” category the Audi A6 allroad quattro beat 13 rivals, claiming victory with 13.35 percent of the votes.

The Audi A6 allroad quattro keeps going where the asphalt ends. Its body sits up to 31.5 millimeters (1.2 in) higher than on the A6 Avant. Stainless steel covers protect the underbody at the front and rear. The permanent all-wheel drive, which uses a center differential with large amounts of lock, delivers optimum traction and driving dynamics. Air suspension with adaptive dampers also comes as standard. It features an additional drive mode for an even broader spread between dynamic driving on-road and use on gentle off-road terrain: in allroad mode, the air suspension raises the body by 35 millimeters (1.4 in). At low speeds, the lift mode adds an extra ten millimeters (0.4 in) of ground clearance. A tilt angle display and hill descent control round out the list of standard equipment.

With this year’s victory, the brand with the four rings continues its success in the popular “Auto Bild Allrad” reader survey held annually since 2002. In the past ten years alone, Audi models have graced the top step of the podium 19 times, including the Audi A4 quattro on seven occasions.