After a challenging first half of the year:
Audi Group confirms earnings forecast for 2019 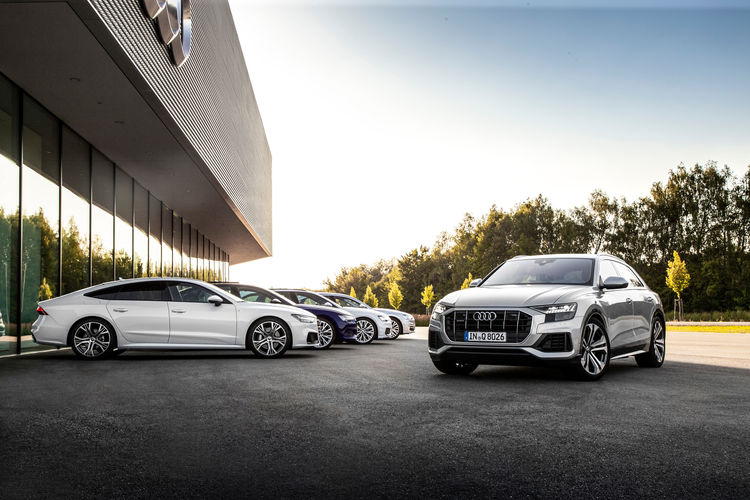 As forecasted, the year 2019 is proving to be challenging for the Audi Group: In the first half of this year, deliveries, revenue and operating profit were lower than in the same period of 2018, partially reflecting effects from the deconsolidation of several multi-brand import companies. Operating performance was adversely affected in particular by the repercussions of the WLTP changeover, the implementation of the model initiative and the downturn in the global passenger car market. At the same time, Audi is making high advance expenditure in the mobility of the future. As a result, the operating return on sales of 8.0 percent for the first half of the year was below the long-term target corridor of 9 to 11 percent, but within the bandwidth of 7 to 8.5 percent that had been forecasted for 2019. Despite strong headwinds, the Audi Group also affirmed its earnings target for the full year.

“As expected, 2019 is a real test. We are operating in a very difficult market environment with many adverse factors and are taking consistent action against this trend with our Audi Transformation Plan,” says Alexander Seitz, Member of the Board of Management for Finance, China and Legal Affairs at AUDI AG. “At the same time, we – like our competitors – must renew the future viability of our business model and work hard on our long-term competitiveness. With the new ‘Consistently Audi’ strategy, we have defined the roadmap into the future. What counts now is consistent implementation. Together with the employee representatives, we want to agree on sound solutions to finance this change.”

The strategic realignment presented by the Audi Board of Management at the Annual General Meeting in late May puts Group-wide decarbonization center stage including the substantially expanded electrification of the model range. Profitability and corporate value are to increase significantly in the long term with “Consistently Audi.” Audi's planned advance expenditures will total approximately €40 billion solely until the end of 2023.

In the first half of 2019, the company handed over to customers 906,180 automobiles of the Audi brand and thus fewer than in the previous year (2018: 949,233). The global car market contracted at a similar rate, so the Four Rings’ market share remained stable. Adverse factors for Audi also resulted from aftereffects of the transition to the WLTP test cycle and from the ramp-up of numerous model changes. The company expects the model initiative to deliver increasing growth stimulus during the second half of the year. The upgraded A4 and Q7 volume models will be launched, as well as the Q3 Sportback – a new model without a predecessor. Especially in the full-size segment, Audi is expanding its portfolio of plug-in hybrids – in the A7 and A8 model series for example – and with especially sporty automobiles such as the SQ8* and the most dynamic member of the A8 family. In China, the all-electric Audi e-tron* and the Q8 will become available for the first time, and in the United States, the new generation of the important Q3 will be launched.

First-half revenue amounted to €28,761 million (2018: €31,183 million) and reflects the adjusted reporting structure of the Audi Group. Due to the previous inclusion of several multi-brand import companies, Audi’s consolidated financial statements also included revenue from the sale of cars of other Volkswagen Group brands in previous years. This revenue has now been reported at Volkswagen Group level since the beginning of 2019. Adjusted for these effects, revenue in the first six months of the year was slightly higher than the prior-year level. Positive effects resulted from the model mix, primarily from the launch of the Audi e-tron and the Q8. At Lamborghini, revenue increased by 75.6 percent along with the success of the Urus* super SUV.

For the first half of this year, the Audi Group posted operating profit of €2,300 million (2018: €2,761 million). The decrease is attributable among others things to higher depreciation of the production network expanded in the previous years and increased personnel costs. Higher advance expenditure for future technologies also had an adverse impact and led to an increase in the ratio of research and development expenditure to revenue to 7.7 percent (2018: 6.5 percent). On the contrary, lower distribution costs had a positive effect and the company made further progress with the Audi Transformation Plan. In the context of this program for earnings improvement, Audi took measures in the first half of the year that will have a positive impact on full-year 2019 operating profit in an amount of more than €1 billion.

The operating return on sales decreased to 8.0 percent in the first half of the year (2018: 8.9 percent). The revenue-reducing effects from the deconsolidation of the multi-brand importers had a positive effect on the return ratio and dampened its decrease.

At €2,253 million (2018: €2,672 million), the net cash flow yet again reached a high level also in the difficult first half of this year, thus confirming the Audi Group’s first-class solvency. Compared with the prior-year figure, decreased profit before tax and one-time effects from the deconsolidation of the multi-brand importers had a negative impact. Positive factors were increased spending discipline and the sharpened strategic focus of investment activities, which led to a decrease in the ratio of capital expenditure to revenue to 3.0 percent (2018: 3.4 percent).

“In the second half of the year, we will vigorously push ahead with our restructuring. We intend to further stabilize Audi’s performance in a turbulent environment,” says Alexander Seitz. “The upcoming introduction of the second stage of the WLTP test cycle will also challenge us again. We have prepared for this intensively in recent months and as the next step will focus on the reduction of the related inventories.”

For the full year, the Audi Group affirms its earnings forecast and anticipates an operating return on sales of between 7.0 und 8.5 percent. Along with moderately rising deliveries of the Audi brand, revenue should slightly exceed the prior-year figure adjusted for the deconsolidated import companies. The company forecasts a net cash flow of €2.5 billion to €3.0 billion. Audi now assumes that its ratio of research and development expenditure will be moderately above the target corridor of 6.5 to 7.0 percent; at the beginning of the year, the company had anticipated a ratio just slightly above the target corridor. On the other hand, the Audi Group now anticipates a lower capital-expenditure ratio which is to be slightly below instead of within its target corridor of 5.5 to 6.0 percent.

Information on fuel consumption and CO2 emissions as well as efficiency classes in ranges depending on the tires and alloy wheel rims used.