30 years of partnership in China:
Audi and FAW start a model initiative 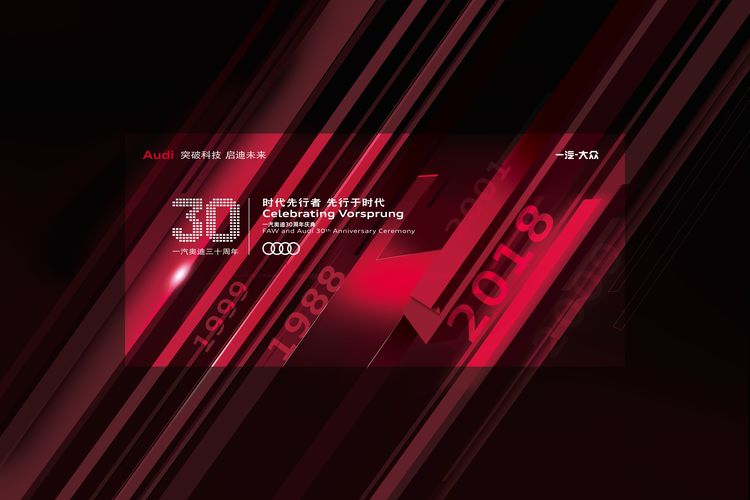 Audi and First Automotive Works (FAW) are celebrating the 30th anniversary of their partnership this Monday. The approximately 650 guests at the anniversary event at the FAW plant in Changchun include representatives of the province of Jilin, of partner FAW, and of the FAW-Volkswagen joint venture, as well as members of the boards of management of Volkswagen AG and AUDI AG. Audi is further expanding its local research and development competencies in order to launch more China-specific model variants and digital services. The first electric car tailored for Chinese customers, the Audi Q2 L e-tron, will already be launched in 2019. Local production of the Audi e-tron will follow in 2020, one year after its market launch in China.

China has developed into Audi’s strongest growth engine and biggest single market. In the past 30 years, Audi has delivered more than five million automobiles there. Sales volumes have increased more than fivefold in the past ten years. The models Audi A4 L, A6 L and Q5 L are especially popular with Chinese customers, and China is the most important sales market also for the Audi A8 L. The fourth model generation of this luxury sedan is once again the reference for Vorsprung durch Technik. The Audi A8 demonstrates this with style-defining design, innovative chassis solutions, an innovative touch operating concept and consistent electrification of the drive system. The Four Rings were the first automobile brand to launch services developed for China such as 3D maps and Chinese character recognition, in order to respond precisely to the wishes of Chinese customers. China will continue to contribute significantly to Audi’s growth.

Herbert Diess, CEO of Volkswagen Group and Chairman of the Supervisory Board of AUDI AG, says: “30 years of Audi in China tell a success story of innovation, transformation and friendship. I am looking forward to the next 30 years.”

Alexander Seitz, Audi Board of Management Member for Finance, China, Compliance and Integrity, emphasized: “We will use our experience to locally develop and produce even more models specifically for China in the future. We will continue our shared success story with the latest technologies, digital services that focus on market needs, and models like the Audi Q8 and Audi e-tron.” By 2022, Audi aims to increase its local portfolio with FAW-VW to more than ten models. The first all-electric models from Audi will also be sold in China.

Audi currently offers six locally produced model families in China. The Audi A4 L, A6 L, Q3 and Q5 L series are built at the Changchun plant in the north. The Audi A3 Sedan, A3 Sportback and Audi Q2 L drive off the assembly line in Foshan in southern China. A further step in the cooperation between Audi and FAW is the start of Audi production in Tianjin. The Chinese plants are making a significant contribution within the Audi production network. Their flexible structure will allow the ongoing gradual expansion of capacities. In the coming years, capacity with the partner FAW-Volkswagen can be increased to a total of more than 700,000 automobiles, depending on market demand.

Audi was the first premium brand to enter the Chinese market in 1988. As part of a license agreement between Audi and FAW, the Audi 100 was the first model to be produced from parts kits at the FAW plant in Changchun. In 1995, Audi production was integrated into the FAW-Volkswagen joint venture and the cooperation was successively expanded. As a pioneer, Audi put long-wheelbase versions of the Audi A4 and A6 on the road and, with the Audi A6 L e-tron, offered the Volkswagen Group’s first locally produced plug-in hybrid. In 2013, the brand with the Four Rings inaugurated a development center in Beijing, thus paving the way for an innovation boost in Asia. Another important milestone for Audi in China is the assumption of Group-wide development responsibility as a Center of Excellence for high-voltage battery cells.

In addition, the partners are intensifying their cooperation along the entire value chain, with connectivity services and mobility offerings. FAW CEO Xu Liuping: “Together we have achieved numerous pioneering milestones and thus created a successful win-win cooperation.”