{{ activeItem() }}
Twitter
05/13/21
The next chapter of our #24hNBR history: the endurance classic in 2014. Crossing the finish line to win the race fo… https://t.co/hX31aOhn0y
05/10/21
Victories for the Audi R8 LMS in Europe &amp; Australia were just some of the highlights for our customers worldwide du… https://t.co/opbSgKfmkw
05/10/21
MEDIAINFO: Audi Sport customer racing newsletter: Audi R8 LMS top in Europe and Australia &gt;&gt;… https://t.co/DbXq6NdlPC
05/10/21
Some more shots from the 2021 @FIAFormulaE Monaco E-Prix. High-resolution photos are available in the Audi MediaCen… https://t.co/WFnEJDOeJn
Audi Sport on Twitter
{{ activeItem() }}
Facebook
05/13/21
Looking back on the next chapter of our history at the ADAC TOTAL 24h-Rennen Nürburgring. Together with Christopher Haase - Fanpage, join us as we relive the race in 2014, which resulted in a faultless victory and a new race distance record. #PerformanceIsAnAttitude #24hNBR
05/10/21
Victories for the Audi R8 LMS in Europe and Australia were just some of the highlights for our customers worldwide during the most recent race weekend. Well done to all! 🇫🇷 🇦🇺 🇸🇰 🇩🇪 🇳🇴 🇳🇿 🇨🇳 🇧🇷 🇧🇪 🇮🇹 >> audi.com/GT3 >> audi.com/GT4 >> audi.com/TCR #PerformanceIsAnAttitude
05/08/21
From the back and into the points for Lucas Di Grassi in Monaco: Lucas moved forward from 17th to score a point in 10th, while René Rast’s kiss with the wall unfortunately ended his race. Up next: Puebla in Mexico from June 19–20. >> audi.com/FormulaE #FutureIsAnAttitude #MonacoEPrix
05/08/21
RACE DAY in Monaco, the first time that ABB Formula E is running on the full-length circuit. Don’t miss today’s Monaco E-Prix at 16:04 CEST. >> audi.com/FormulaE #FutureIsAnAttitude #MonacoEPrix
Audi Sport on Facebook 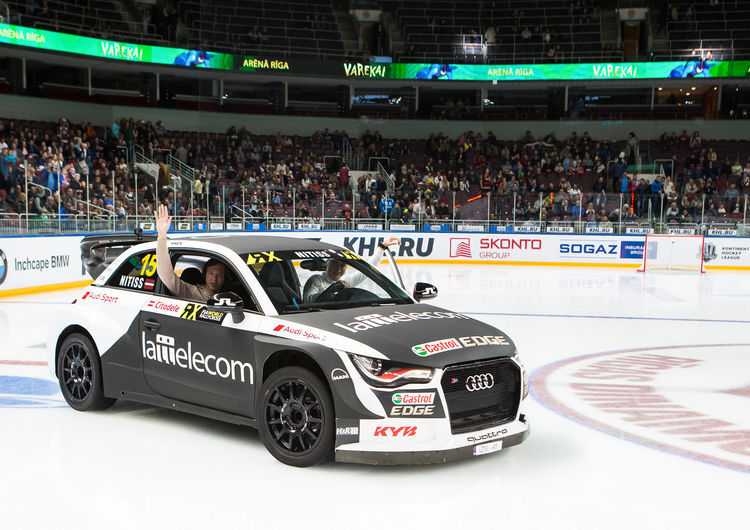 Rallycross driver Reinis Nitišs is currently beating the big drum for the FIA World Rallycross Championship round in his native Latvia to be held in Riga on September 16 and 17. Driving on pure ice was the absolute highlight for the 21-year-old campaigner from Mattias Ekström’s team, EKS. During one intermission of the KHL ice hockey match between Dinamo Riga and SKA St. Petersburg, Nitišs was allowed to hit the ice at the Arena Riga rink in the Audi S1 EKS RX quattro and did a few laps accompanied by thunderous applause of the more than 6,000 spectators. During the past weeks, the rallycross S1 was displayed in Riga’s four largest shopping centers and at the Positivus music festival, among others. Thanks to a special registration, the Audi S1 EKS RX quattro was allowed to be driven on public roads at these events. The World RX round in Riga celebrated a brilliant premiere last year and was recognized as the best event of the 2016 FIA World Rallycross Championship.