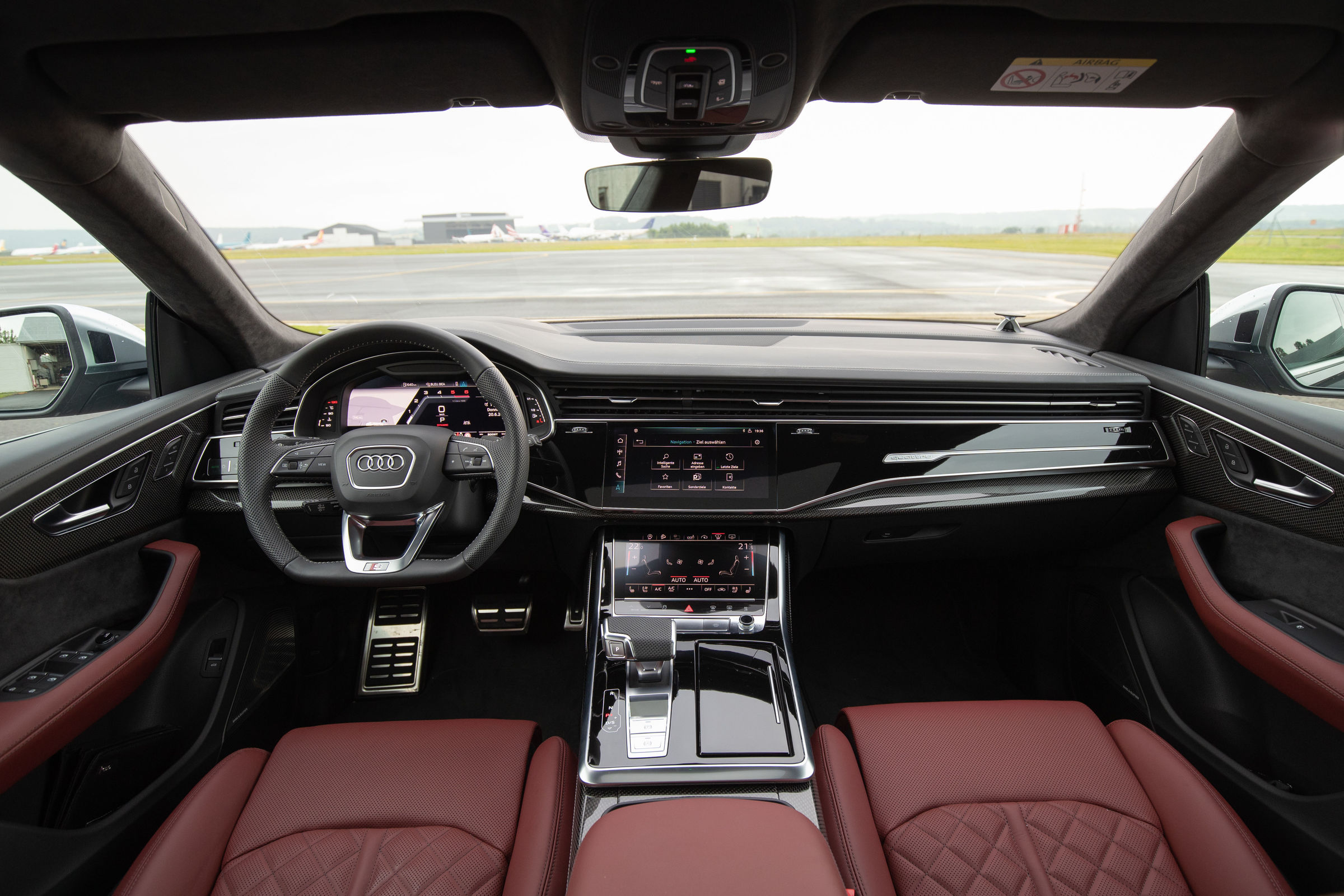 Standard: Touch displays with haptic feedback and Audi virtual cockpit
The SQ8 TDI is operated via the MMI touch response concept that Audi introduced for its full‑size models. Two large touchscreens with haptic and acoustic feedback function as the central elements. The upper display, which is integrated in a large high-gloss black bezel and is almost invisible when it is switched off, is used to control the infotainment and navigation systems. The driver uses the lower display for managing the heating and air conditioning, convenience functions, and text input, the latter with his or her wrist resting comfortably on the selector lever if desired. Text entry also detects letters drawn on top of each other and confirms this with acoustic feedback. The MMI search function outputs a hit list after just a few letters have been entered.

The Audi SQ8 TDI is also equipped with a natural language voice control that even understands freely formulated commands and questions. To respond, the system uses information stored on board, such as the driver’s preferred navigation or special destinations, on the one hand and knowledge from the cloud on the other hand. While online language cross-referencing improves the detection rate and quality of results, the advantage of the onboard information lies in its rapid, reliable availability—even in the absence of a mobile network, say in an underground parking garage.

The third standard display in the Audi SQ8 TDI is the Audi virtual cockpit, which displays a great deal of detailed information. The driver can use the view button on the multifunction steering wheel to switch between two views on the fully digital instrument cluster: While the tachometer and speedometer are displayed as large dial-type gages in driving mode, the map is the center of attention in infotainment mode. Both views have S-specific red graphical details. A performance layout where the central focus is the tachometer, displayed as a square graph, and the performance and torque are shown as percentages can also be selected in the MMI. Upon request, the head-up display can display important information, for example relating to route guidance, on the windshield.

The top infotainment system MMI navigation plus is also installed on board the sporty top model as standard. It has an integrated data transfer module that supports the LTE Advanced standard and a Wi-Fi hotspot. The navigation system offers many intelligent functions. For example, it recognizes the driver’s preferences based on previous journeys and can therefore make intelligent suggestions. The route is calculated online on the servers of the map and navigation provider HERE, using real-time data for the traffic situation. The customer can update the map, which includes many downtown maps as 3D data records, free of charge four times a year.

Get to the next traffic light when it’s green: the new Audi connect services
The online services from Audi connect, including traffic information online and navigation with Google Maps, have been added to the standard route planning feature. This allows the customer to select points of interest such as parking garages or sights in the navigation map and view photos, opening hours and ratings. The Car-to-X services, online traffic sign information, hazard alerts and on-street parking, all of which use the swarm intelligence of the Audi fleet, are also part of Audi connect. The traffic light information service, which connects the vehicle with the central computers of the city’s traffic light systems, is a new feature. During the journey, the Audi virtual cockpit indicates to the driver at which speed they will reach the next traffic light when it is green. If the vehicle is already stopped at a red light, the remaining time until the next green light is shown. The service, which will be rolled out step by step in selected European cities, thereby contributes to a predictive and efficient driving style and facilitates a steady flow of traffic.

The connect portfolio also includes the cloud-based Amazon voice service Alexa, which is integrated into the MMI operating system of the Audi SQ8 TDI. The driver can use it to place orders and get information on various current events. Alexa streams music and audiobooks and provides access to over 80,000 Alexa skills. The smart home control allows users to lock doors in the house, adjust the lighting and close the garage door from within the car.

In addition to the free myAudi app, which connects the SQ8 TDI seamlessly with the smartphone, the intelligent network also includes the digital Audi connect key. It is available as an option and authorizes an Android smartphone to not only lock and unlock the vehicle, but also to start the engine via the start/stop button. The personalization feature allows multiple drivers to each store up to 400 preference settings in individual user profiles. The Audi smartphone interface is used to integrate iOS and Android smartphones in the onboard infotainment system. It establishes the connection to the mobile device and transfers its native environment, Apple Car Play or Android Auto, to the MMI display—this can even be done wirelessly with the iPhone. The infotainment program is rounded off with equipment such as the Bang & Olufsen 3D Advanced Sound System and the Audi phone box.

Getting to your destination safely with the assist systems

The large selection of assist systems makes the journey in the Audi SQ8 TDI even more safe and relaxed. Some of these, including the safety systems Audi pre sense basic and Audi pre sense front, are standard equipment. The camera-based traffic sign recognition also comes as standard in Germany. The most important optional systems are subdivided into the “City” and “Tour” packages.

The adaptive cruise assist relieves the driver on longer journeys by assisting with longitudinal and lateral guidance. It incorporates the functions of adaptive cruise control, traffic jam assist and active lane assist. In conjunction with the efficiency assistant, the system predictively slows down and accelerates the Audi SQ8 TDI on the basis of sensor information, navigation data and road signs.

The collision avoidance assist, crossing assist, cross traffic assist rear, exit warning and lane change assist ensure safety when driving in the city. Multiple images from the 360 degree cameras allow precise maneuvering down to the centimeter and provide a view of crossing traffic and a detailed view of the wheels. One of its highlights is the 3D view with freely selectable perspective. The curb warning, which protects the rims against damage while parking, and the maneuver assist will follow next year. The maneuvering assist counteracts imminent collisions with small steering pulses and independent braking to a standstill, for example when it detects pillars in a multi-story car park as an obstacle.

Behind many of these systems lies a high-tech module from Audi: the central driver assistance controller, or zFAS for short. The tablet-size computer, which is on board the SQ8 TDI as standard, constantly calculates a differentiated image of the environment. This central model enables the assist systems to react precisely and in good time to objects, for example by initiating braking. Navigation is also highly precise because the sensor data fusion locates the driver’s car down to the exact lane. Depending on the selected options, the zFAS receives the data to do this from up to five radar sensors, five cameras, and twelve ultrasound sensors.