The Buildings in Construction Section 1 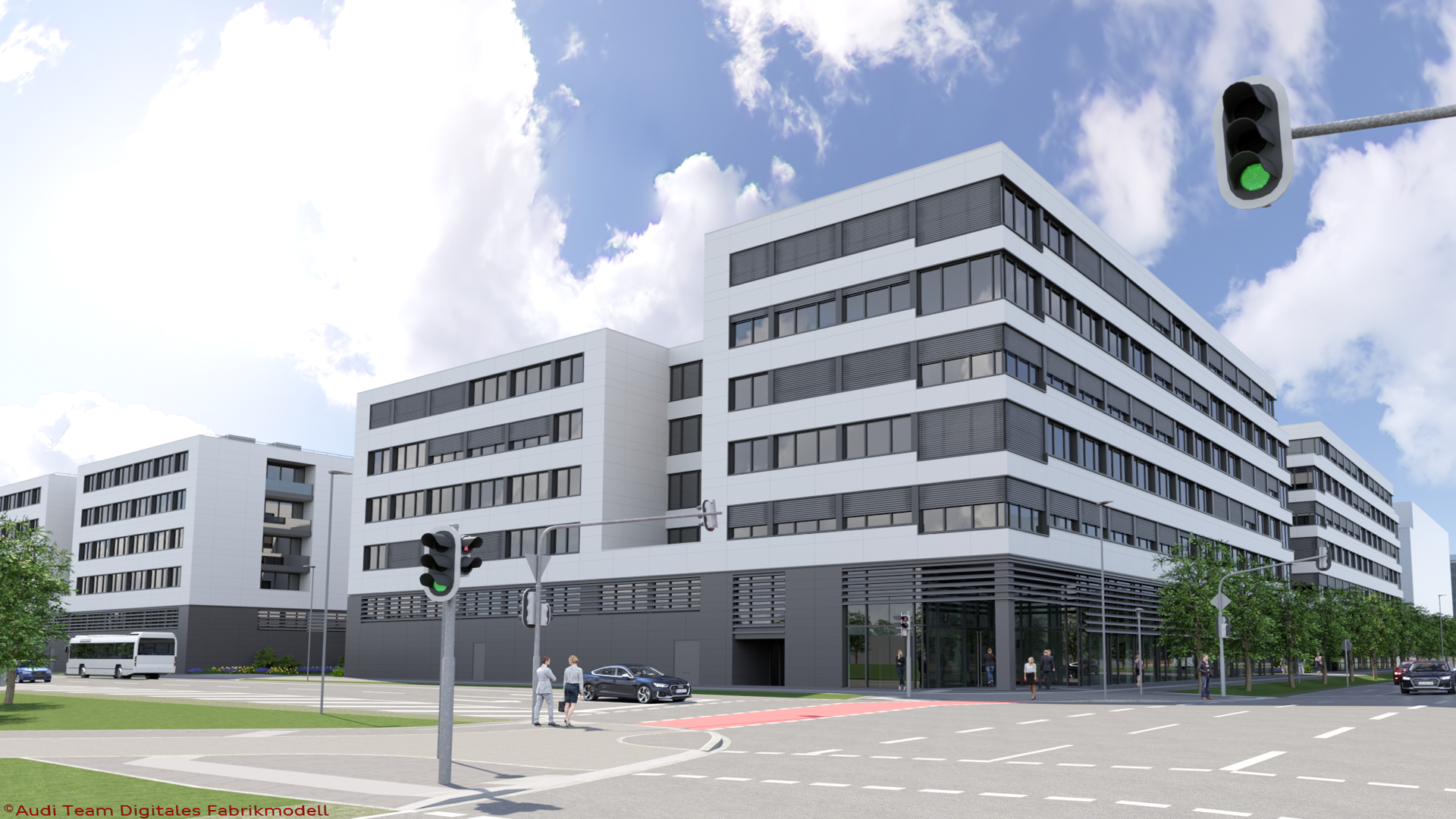 The IN-Campus is being built on a former refinery site in Ingolstadt. In 2015, IN-Campus GmbH, a joint venture of AUDI AG and the city of Ingolstadt, acquired the majority of this industrial wasteland. The necessary remediation of the ground and groundwater started in fall 2016 in the north of the site; it is planned largely complete by late 2022. Building work has already started on the remediated and unpolluted sections of the site. The buildings from construction section 1 are due to be ready in 2023. IN-Campus GmbH is investing in a campus—the focus is on the technologies of the future.

A major strength of the IN-Campus site is the continuous area of 75 hectares, the likes of which cannot be found anywhere else in Ingolstadt or the region. It offers an opportunity to create a spacious, flexible and attractive technology park in which high tech and creativity coexist. 60 hectares will form the commercial and industrial area in the future; building work on them is to be completed in three phases. Another advantage is the location of the area: It is located close to the Audi parent plant in the east of Ingolstadt and directly on the A9 highway.

Open and Close to Nature: The Site as a Whole
The IN-Campus has been designed as an open site without a plant fence, i.e. as a genuine campus. At its southern edge can be found the Audi Sportpark (the stadium of FC Ingolstadt 04), while a commercial park lies adjacent to it in the west. In the north and east, sparse woodland stretches along the banks of the Danube. The transition to it takes place in a 15 hectare green corridor; this is where a riverside woodland with nutrient-poor grassland and willow trees is being created to act as a compensation area. In this way, IN-Campus connects the urban world with the quietness of the Danube wetlands; it creates an interface between high tech and nature. From north to south—from the Danube to the stadium—an parkway roughly one kilometer (0.6 mi) long with generous green areas runs across IN-Campus. At several points, this “Campus vein,” which is approximately 50 m (164.04 ft) wide, expands to create small places, a vital communication and meeting space for the future employees and guests.

Ideas Factory: The Project House
Considerable construction work has been underway on the IN-Campus since fall 2018. A distinctive building area in construction section 1 is called the project house. It is being built in the northwest of the site and is a large complex consisting of four buildings. This is where the developers of the technologies of the future will work in the future. This new ideas factory offer space for around 1,400 employees from Audi and selected partner companies—42,000 m2(452,084.2 sq ft) of office and workshop space, rounded off by conference rooms and catering facilities. Completion is scheduled for late 2020.

While the project house is being constructed, infrastructure work for construction section 1 is also underway. The IN-Campus will have a direct connection with the A9 highway; expansion of the Ingolstadt-Süd interchange is in full swing. This highway has been acting as a digital test field for the development of automated driving for many years now.

Ultra-Modern Technology: The Vehicle Safety Center
The largest building in construction section 1 will be the vehicle safety center, construction of which will start in spring 2020 and last two years. The main building forms a cube with an edge length of 130 x 110 m (426.5 x 360.9 ft) and a height of 20 m (65.6 ft).

The heart of the structure is formed by the crash arena, a support-free area 50 x 50 m (164.04 ft x 164.04 ft) in size. Two crash tracks run through it, each one 120 m (393.7 ft) in length. Audi can drive collisions on them at speeds of up to 120 km/h (74.6 mph), including, for the first time, head-on collisions between a car and a barrier that is also moving. Ultra-modern high-speed cameras and energy-efficient LED light systems support the crash team in their work. A third, shorter crash track for side impacts, different individual test benches and offices round off the building’s facilities.

The new vehicle safety center will take over the tasks currently performed by the existing system on the technical development site. It will be able to handle many more complete vehicle crashes per year than in the past. The concept, technology and adjacent expansion areas ensure that it will meet the requirements for many years to come. This is important in light of the increasingly strict standards and regulations on the global markets and the challenges posed by electric mobility. Despite the rapid progress made in simulation technology, real crashes in hardware remain unavoidable.

Smart Energy: The Energy Control Center
The energy control center will be built to the north east of the project house; construction is set to start in 2019. Not only does it provide water and electricity, it is also the heart and brain of the energy system concept for the IN-Campus.

The LowEx network is a major element in the innovative energy system. This water-based piping network acts as a heat source and a heat sink for all the buildings on the IN-Campus. Plastic lines with a pipe diameter of around 60–80 cm (23.6–31.5 in) are already being laid in the ground of construction section 1. Buildings with a high cooling load release waste heat that accrues (e.g. IT center) into the network, while buildings with a high heating load take the necessary energy from the LowEx network. In this way, consumers become generators. The network’s temperature deliberately moves between 5°C and 30°C by using the seasonal fluctuation—this is ideal, e.g. in order to feed environmental heat or waste heat into the network. The necessary system temperatures are guaranteed by means of reversible heat pumps in the buildings in question.

Thermal energy storage systems in the energy control center make a major contribution to load management and to increasing the energy efficiency of the overall system. With a volume capacity of around 3,000 cubic meters, they save both heat and cold.

The CEC system (cross energy concept) acts as the central intelligence for the energy supply. It manages the interaction of all technical components for the purpose of maximum efficiency.

The energy concept is modular and highly flexible. In construction section 1, the IN-Campus will continue to procure electricity and district heat from outside. The medium-term vision is a zero-energy campus, one which uses self-generated and regenerative energies to a considerable extent and integrates new innovation components for this purpose again and again. This can be a photovoltaic system with a high efficiency level or an industrial fuel cell—or even technologies that are not even on the market yet.

Digital Nerve Node: The IT Center
A new IT center will be built between the project house and the vehicle safety center on a floor space of almost 10,000 m2(107,639.1 sq ft). Construction is set to start in 2019. This will then be home to around 8,000 servers and storage and network components on an area of 2,000 m2(21,527.8 sq ft) for IT. The IT center will support AUDI AG’s future-oriented projects with ultra-modern hardware and software; in its technical concept, maximum availability and the highest level of failure safety are given utmost importance.

Safety in the Spotlight: The Functional Building
A two-story functional building will be located in the north east of the IN-Campus. Property protection facilities, training rooms, a dedicated fire station for the IN-Campus and an emergency medical center will be based here. Construction is likely to start in 2020.