{{ activeItem() }}
Twitter
09/25/21
¡Hola! from @CircuitValencia – the @GTWorldChEu Sprint Cup season finale is taking place this weekend. &gt;&gt;… https://t.co/OYyugM86ME
09/25/21
CarBahn with @PeregrineRace qualified third in the GTD class for the @IMSA WeatherTech SportsCar Championship race… https://t.co/4VYPMyk3Ay
09/23/21
MEDIAINFO: 100 days to go until the Dakar Rally: A race against time for Audi Sport &gt;&gt; https://t.co/tNLOfBm45l… https://t.co/xsF4kkNwxL
09/23/21
[1/2] Good luck to the Audi teams: 🇪🇸 @GTWorldChEu Sprint Cup finale at @CircuitValencia 🇩🇪 NLS @vln_de at… https://t.co/vv3SZUrN78
Audi Sport on Twitter
{{ activeItem() }}
Facebook
09/23/21
Under the skin of our new Audi RS Q e-tron. T-100 days until the start of the 2022 Dakar Rally. >> audi.com/Dakar #FutureIsAnAttitude #RoadToDakar #Dakar2022 #RSQe-tron -------------------- Closed roads/professional drivers, instructors present /do not copy. This vehicle shown here is the Rally Dakar vehicle that is not available as a production model.
09/21/21
Racer, drifter, progressive thinker. There is a new face on the block who is ready to redefine high performance. Meet the newest member of our team now >> at.audi/KenBlock #FutureIsAnAttitude #Audi #AudiSport #etron -------------------- This vehicle shown here is the Rally Dakar vehicle that is not available as a production model.
09/20/21
Electrifying and exhilarating. Our partners at FC Bayern München got to experience the Audi RS e-tron GT* with a memorable afternoon at the Audi driving experience center at Neuburg an der Donau. Driving change never looked so fun. Discover more at >> at.audi/fcb-meets-e-tronGT #AudixFCB #FutureIsAnAttitude #etronGT #emobility -------------------- *Power consumption, combined*: 20.2–19.3 kWh/100km (NEDC); 22.5–20.6 kWh/100km (WLTP)CO₂ emissions, combined*: 0 g/km Closed roads/professional drivers,instructors present / do not copy.
09/20/21
Audi Sport Italia is on top of the standings in Italy thanks to another victory with the Audi R8 LMS. Adding to the success was a second overall GT3 triumph in China, a DTM Trophy win with the Audi R8 LMS GT4 and podiums for the Audi RS 3 LMS in four countries – just some of the highlights. Well done to our customers! 🇮🇹 🇨🇳 🇳🇱 🇩🇪 🇳🇴 🇪🇸 🇭🇷 >> audi.com/GT3 >> audi.com/GT4 >> audi.com/TCR #PerformanceIsAnAttitude
Audi Sport on Facebook 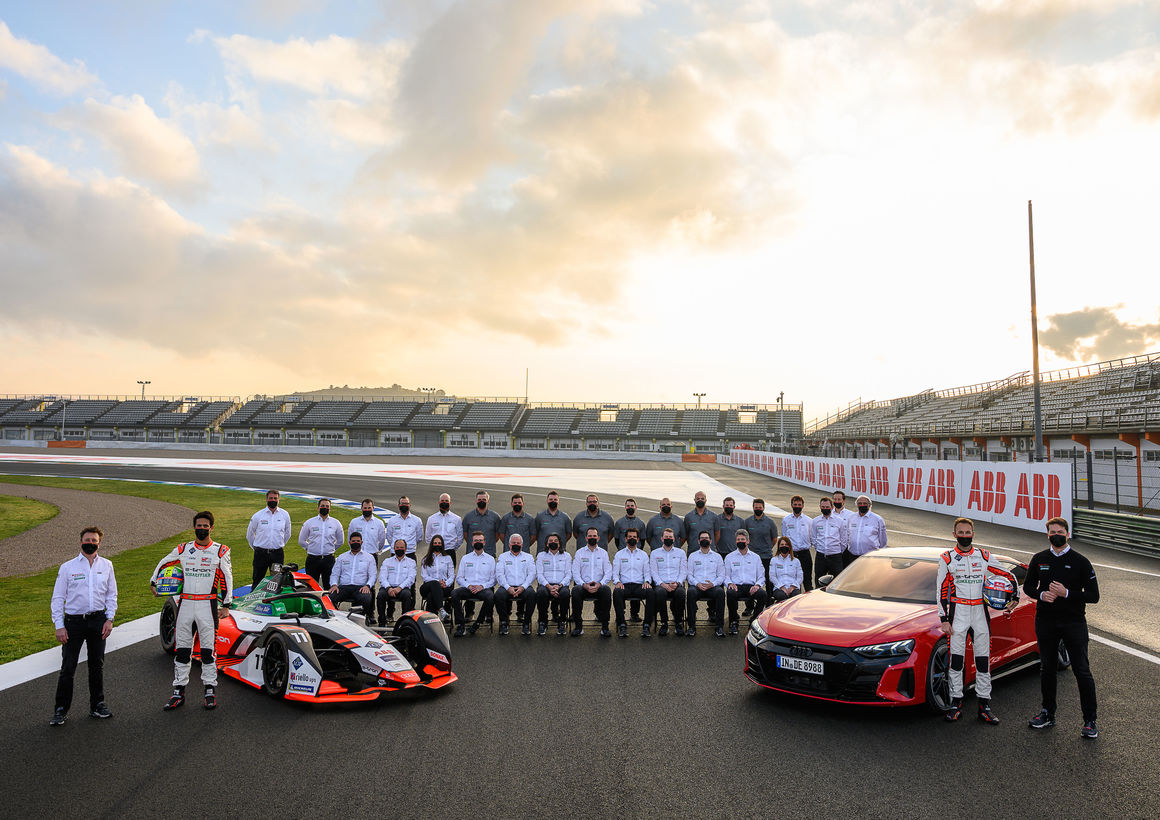 After seven years, Audi Sport ABT Schaeffler is the most successful team in Formula E. The team collected 1,380 points in 84 races. 14 victories and 47 podium finishes are to the team’s credit. Lucas di Grassi won the drivers’ title in the 2016/2017 season. In its first season as a factory team, Audi Sport ABT Schaeffler clinched the teams’ title at the first attempt in the 2017/2018 season.