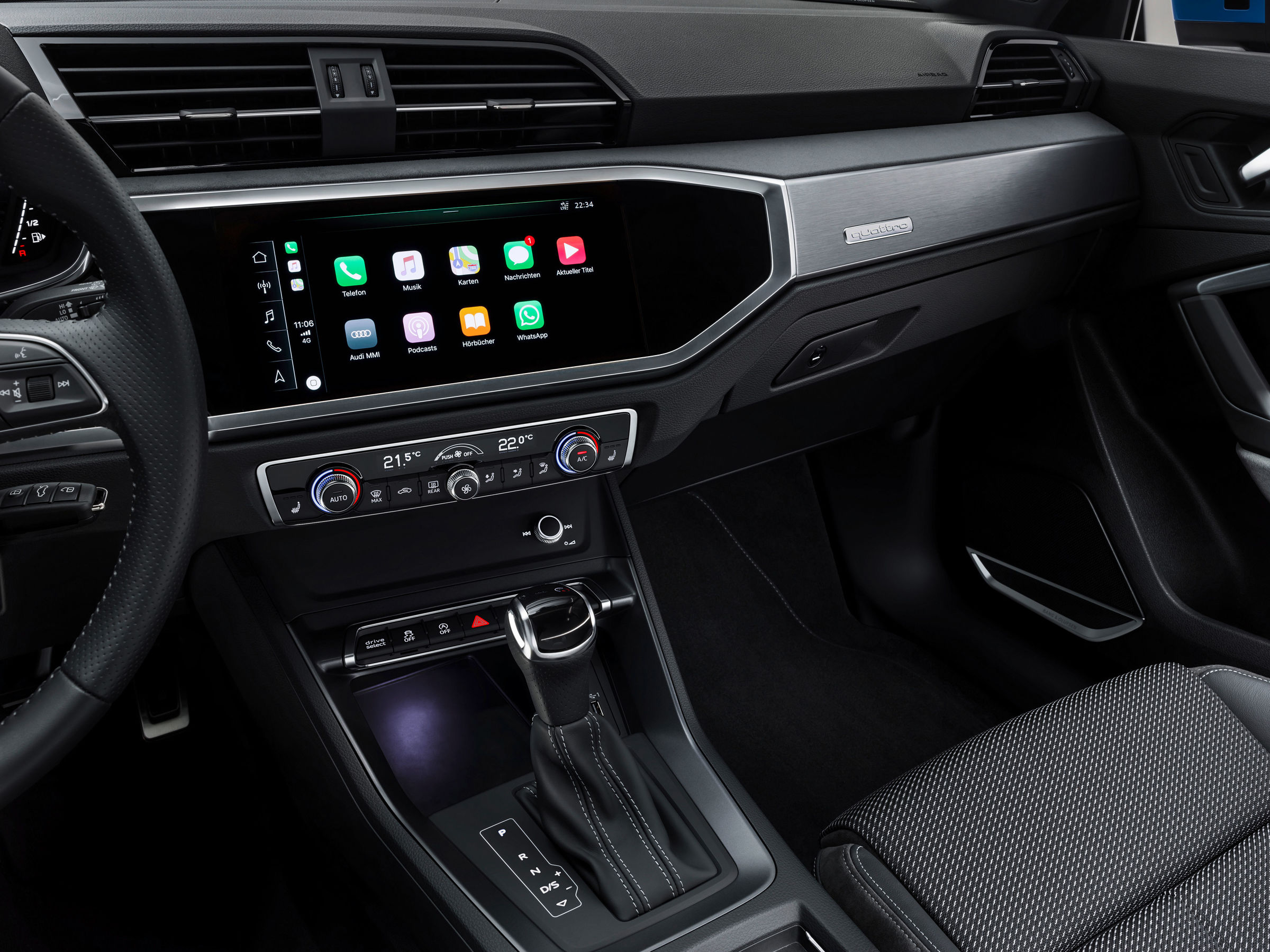 The operating and display concept of the compact family SUV has been overhauled from the ground up – along with the turn-and-press controllers from the preceding model, Audi has done away with the analog instruments. Even with the standard MMI radio, they are replaced by a digital instrument cluster with a 10.25-inch screen diagonal, which the driver operates using the multifunction steering wheel.

The first configuration level is called MMI radio plus – here, the customer can upgrade the digital instrument to the Audi virtual cockpit, which they can configure in many areas. In addition to the usual data such as road and engine speed, it also displays information on music tracks and Audi connect services. If the customer has specified navigation, the display also includes the navigation map. The MMI radio plus also includes an MMI touch display with an 8.8-inch screen diagonal. It is elegantly integrated into the high-gloss black glass-look surround in the center of the dashboard.

The highest level: MMI navigation plus

The most comprehensive infotainment system is the MMI navigation plus. Here, the MMI touch display measures 10.1 inches. In addition, the Audi virtual cockpit is available as an option in a plus version with a 12.3-inch screen diagonal. The driver can call up three different views on the screen, including a “dynamic” screen. Here, the engine and road speed are shown in square instruments with red graphical elements – a really sporty look. In all displays, the graphical user interface is so clear that the information can be read quickly. The menu structure is streamlined and easy to understand, as on a smartphone.

The MMI navigation plus in the new Audi Q3 offers the same functions as in the higher segments – here too, the SUV sets a new standard in the compact class. For instance, the navigation recognizes the driver’s preferences based on previous journeys. As a result, it can give the driver suitable route suggestions taking experience of time and traffic levels into account. The route is calculated online on the servers of the map and navigation provider HERE, using real-time data for the overall traffic situation. If the data connection is lost, the system switches to the on-board routing running in parallel. The customer can update the navigation map four times a year free of charge via the myAudi platform and install it in the Q3 via SD card. In conjunction with Audi connect, the driver can also download the update directly in the car via over-the-air.

Like entry of a navigation destination, the MMI search is based on entry of free text – via a virtual keypad when the vehicle is stationary or via handwriting recognition. If the driver is looking for a restaurant, for instance, a list of hits appears after just a few letters. The new natural language voice control, which allows freely structured wording, is even more convenient. It can understand a sentence like “I am hungry” and in response suggests restaurants close by. The dialog manager asks questions if necessary, allows corrections, offers choices and also defers to the speaker when interrupted. The dialog goes beyond menu boundaries. For example, the user can call a contact from the telephone book and add the address as a destination.