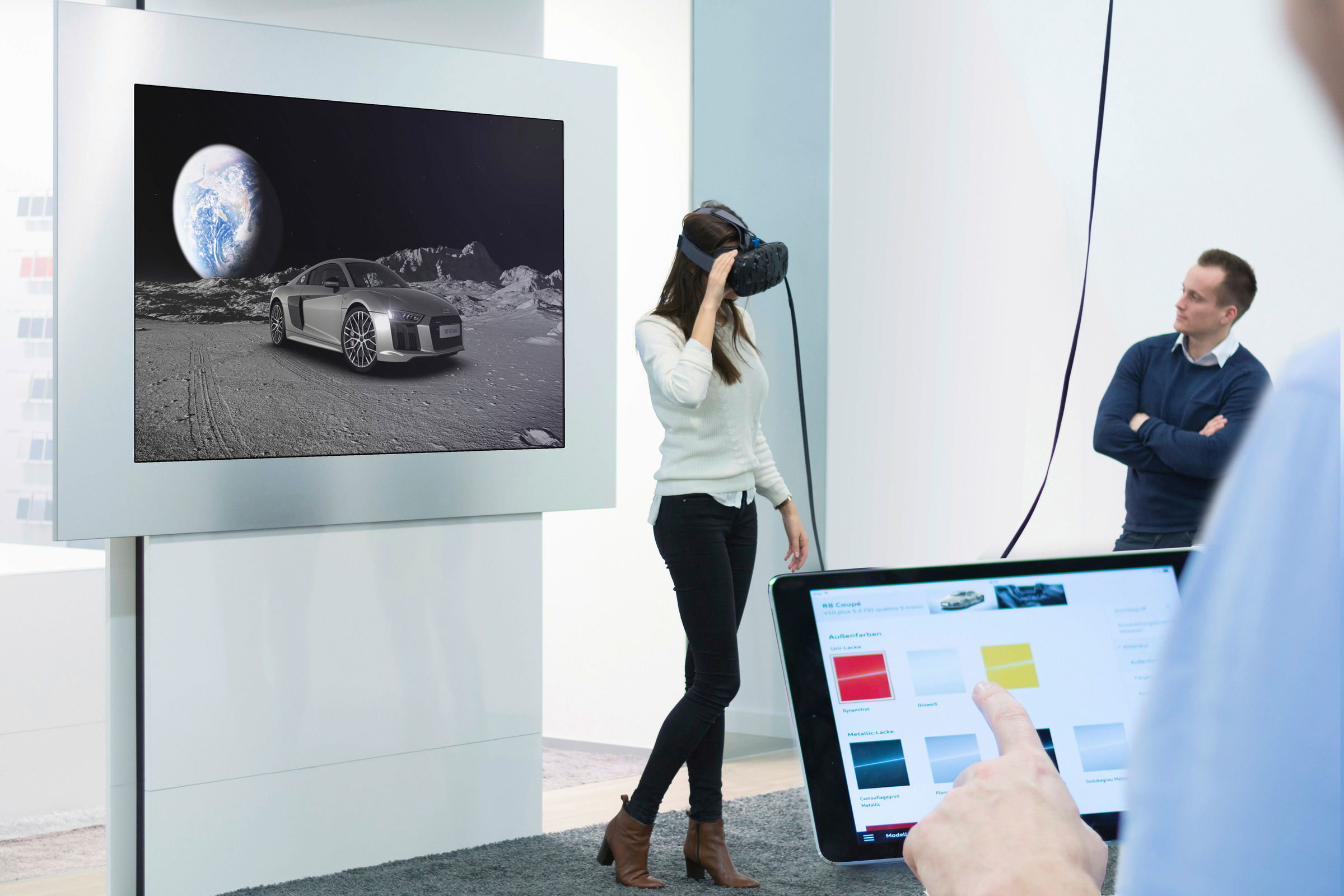 Audi is making increasing use of high-tech simulation tools. One of these is the Audi Virtual Training Car, an Audi A4 equipped with a virtual reality headset for the driver. A driving simulation played back in the VR headset allows the driver to experience in realistic scenarios how the emergency braking assistant Audi pre sense city works – in a car that is actually driving. With this system, Audi dealers worldwide can demonstrate the effectiveness of the Audi assistance systems to their customers convincingly and in rich detail.

The virtual use of Audi pre sense city is part of the international sales training events at the Audi Training Center at Munich Airport. Two Audi A4 sedans* were equipped for this purpose with a VR headset from Oculus. With the headset, the driver can experience the intervention by the emergency braking assistant in a very realistic simulation in a test car that is actually moving.

During the demonstration, the Virtual Training Car drives on a 300 x 600 meter (984.3 x 1,968.5 ft) asphalt surface while the driver watches simulated driving scenarios via the VR headset. The moment a pedestrian steps into car’s virtual path in the simulation, Audi pre sense city brings the car to an abrupt stop. A Flex-Ray interface provides the connection between the warning system and the brake system.

To fully immerse the driver in the simulation, a head tracker mounted on the rear seat measures the driver’s head movements via infrared on the basis of markings on the VR headset. The images on the headset’s two high-resolution displays are adjusted according to the head position and direction in which the driver is looking. If the person behind the wheel looks left out the window, for example, he or she sees the left edge of the road.

A high-precision differential GPS locates the Virtual Training Car on the driving surface with an accuracy down to two centimeters (0.8 in). Together with a position sensor in the car, it detects the car’s movements and determines the precision position in the simulation.

The virtual world is stored on a hard drive in the trunk of the Audi A4. A powerful processor and a fast graphics card from Audi’s partner NVIDIA send the data to the VR headset and to the touchscreen in front of the passenger seat. Should the driver leave the permissible driving area, a warning is issued so that the trainer on the passenger seat can intervene, if necessary via the parking brake.

The Virtual Training Car is based on a project by Technical Development at Audi. Audi is the first and so far only carmaker to deploy such a system, which it uses to train its international dealers. This simulations allow the salespeople to experience the effectiveness of Audi pre sense city under realistic conditions so they can authentically communicate the systems’ advantages to their customers.

After an initial wave of training for roughly 5,000 participants, Audi is now upgrading the simulation. It will soon be able to portray additional assistance functions to impressively demonstrate the effectiveness of the Audi assistance systems in a wide range of driving situations.

The driver assistance systems of today are the pre-stage to the piloted driving of tomorrow. At TechDay Connectivity, Audi makes it possible to experience this with the help of the Virtual Engineering Terminal.

The Virtual Engineering Terminal is a touchscreen with a diagonal of approximately 1.40 meters (4.6 ft) combined with 65-inch monitor and fed with data from four computers. Its virtual environment currently includes five Audi models: the A4, A5, A8, R8 and SQ7 TDI*. For each of these models, the Virtual Engineering Terminal simulates five production assistance systems: the Matrix LED high beam, LED laser high beam, traffic jam assist, park assist and predictive efficiency assistant. It is also used to interactively communicate various predevelopment projects, such as the construction zone lighting assist or the crossing assist. The user can experience these functions in realistic traffic simulations.

If the Matrix LED technology is selected, for example, the stylized image of a parking lot seen from above at night is displayed on the touchscreen. The monitor shows the same environment, with the choice of a bird’s eye view or a cockpit view.

The interaction begins with the user placing a number of Audi models on the virtual parking lot. The red model represents the user’s own car with Matrix LED technology; the blue and the white cars are passive road users.
All models have optical markers on the underbody. These enable the
24 cameras mounted below the touchscreen to detect the position of the cars. So if the user moves the model by hand, the cameras enter the movement in the system. The image on the large monitor changes accordingly. It shows precisely how the red car detects the other cars or objects using its camera sensors and adjusts its Matrix LED lights so that the high beam light pattern excludes the other cars.

Developed in 2012, the Virtual Engineering Terminal is now firmly established at Audi’s Technical Development department. The system uses the original control algorithms of the driver assistance systems and simulates the environment, such as routes and other road users. The Virtual Engineering Terminal is continuously being expanded with new functions.

The brand with the four rings opens up a new virtual world to its customers so that “Vorsprung durch Technik” can be experienced in a very special way. With the help of the Audi VR experience, customers can now virtually explore every last detail of the car of their choice at the dealership – in three-dimensions and from a 360-degree perspective, with all sound effects and all available equipment and trim. The new technology offers an experience that no competitor can match.

When it comes to virtual reality (VR), Audi uses the latest VR headset: the HTC Vive and Oculus Rift. With their large field of view of over 100 degrees, the high refresh rate of 90 images per second and their powerful position tracking, these enable an immersive user experience. Viewers feel as if they have been dropped into the scenery portrayed. The technical performance data of the VR headset is just as impressive. The two OLED displays each have a resolution of 1080 x 1200 pixels and a response time of less than
20 milliseconds throughout the entire application.

In the Audi VR experience, the headset draws its data models from a powerful computer. Audi generates these models on the basis of design data. The brand developed an optimized graphics engine for displaying VR in collaboration with the English specialist Zerolight.

Each vehicle data set is made up of five to seven million polygons, roughly four times more than in a high-end video game. The view can therefore recognize even the tiniest of details, such as the polish of the aluminum inlays or the various gloss levels of the paint finish depending on the position of the virtual light source.

To come up with the desired configuration of the car, the consultant at the Audi dealership can use a tablet to load every current model and equipment feature, from paint colors to wheels, exterior packages and seat upholstery to the infotainment modules.

Two different versions of the Audi VR experience are available. The compact version is designed for locations where space is limited. In this case, customers sit on a couch or an armchair. A camera detects the position of the VR headset, and the system adapts the image displayed accordingly. This enables customers to look around and get closer to interesting details. They start out behind the virtual steering wheel, but the consultant can place customers at different positions outside the car.

The large version of the VR experience, which Audi shows at the Munich airport under the name Audi VR experience advanced, plays on a surface measuring roughly 5 x 5 meters (16.4 x 16.4 ft). Customers can move freely around the virtual car. Audi has already designed a number of diverse VR environments. One setup shows the car in Paris, others in Cannes, on Iceland or even on the moon.

Prototype use of the Audi VR experience began in late 2014. Audi completed the last pilot phase in mid-2016. Series use is now being rolled out successively. The next versions are already in the works and will be presented in the months ahead.

Technologies for portraying virtual cars has been in use at Audi since 2012. Audi stores located downtown in the world’s largest metropolises have less available space than a classic dealership. Powerwalls and tables equipped with touch displays have long since replaced physical cars there. The new VR experience will also be used at these locations in the future.