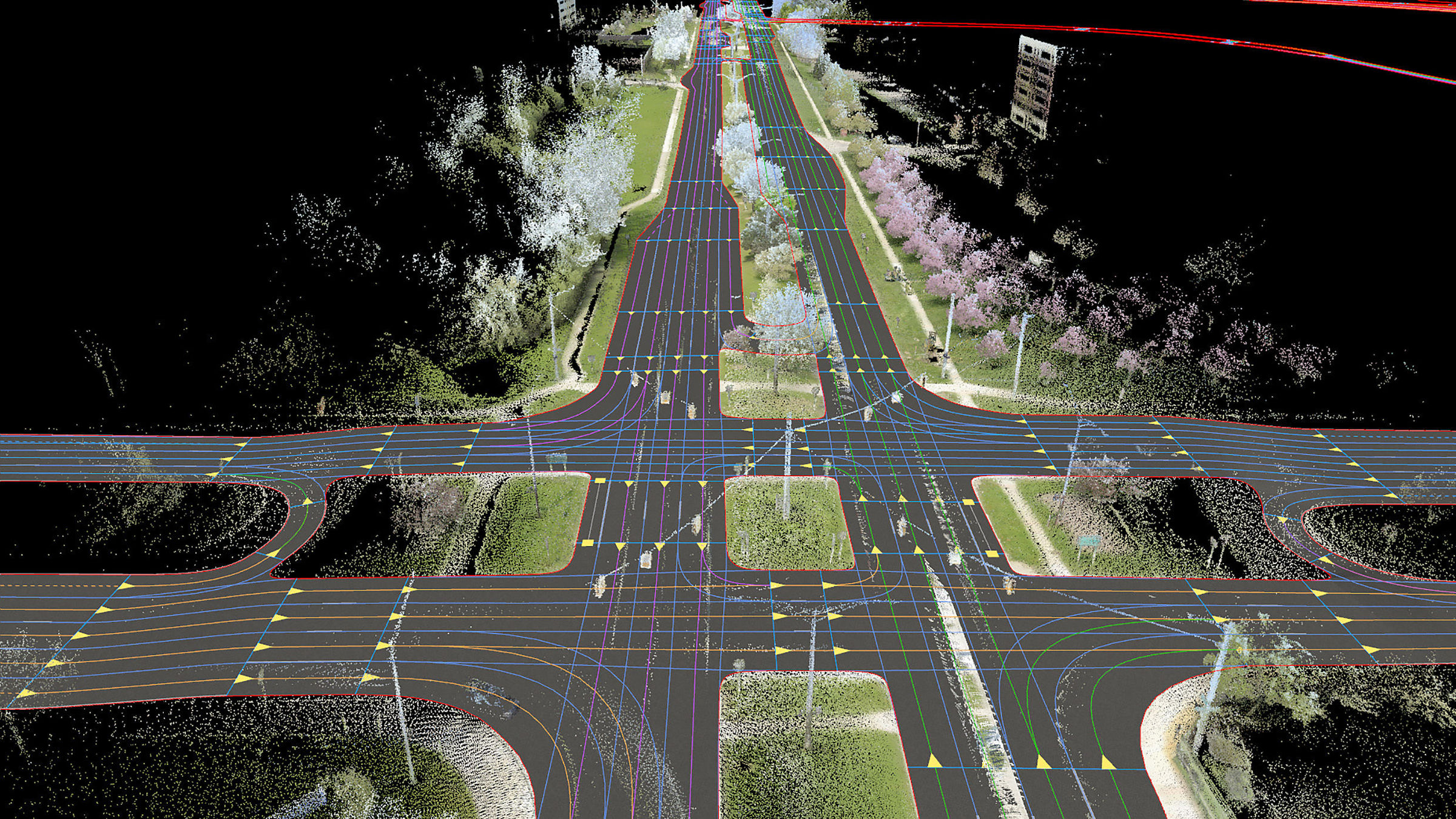 Car-to-x services and swarm intelligence
Audi will add the first car-to-x services to its connect portfolio in 2016. The first applications are the services traffic sign information and hazard information. With car-to-x, Audi models are interconnected in such a way that they can exchange information virtually in real time via the cellular phone network. This technology enables swarm intelligence – the sharing and use of complex information in a large group. Car-to-x communication can help to improve road safety and to enhance comfort. It is also a fundamental element of future Audi models capable of piloted driving.

The new online services traffic sign information and hazard information are available for the Audi A4/A5 family as well as for the Q7. The cars have been gathering information since the middle of this year, and it will be used to build up a database. After a certain amount of data has been generated, the information will be sent back to the cars for the first time toward the end of the year.

For added comfort and greater efficiency, this speed information is shared with other systems in the car. The predictive adaptive cruise control (pACC) and the predictive efficiency assistant (PEA) use these current data from the cloud for an anticipatory driving style. In the future, these systems will observe these temporary speed limits even before they enter the camera’s field of view.

Hazard information
The second production-ready car-to-x communication application is the new hazard information service. Here cars networked over a server warn one another of hazards on the road – of accidents and breakdowns, skidding hazards due to slippery road surfaces or impaired visibility due to fog. The system evaluates multiple parameters to verify cloud-based hazard information: The electronics in an Audi recognize four different events, for which either one involved car is sufficient (accident or breakdown) or multiple cars have to be affected (skidding hazard or impaired visibility). To detect poor visibility reliably, the connect service evaluates e.g. data from rain and light sensors, as well as the operating mode of the windscreen wipers. An accident or breakdown is reported provided an emergency call has been placed by the eCall system or an airbag has been activated. Only after verified information about a hazard site is available does the system actually report the hazard to the cloud in order to warn following traffic in a timely manner. The warnings appear in the instrument cluster, and the speech output system also informs the driver so that current hazard warnings are received significantly faster.

On Street Parking
Audi is developing additional connect services for the future, such as a parking spot search function under the project name On Street Parking. Cars equipped with car-to-x technology automatically report when they enter and leave a parking spot to the servers in the cloud. The application identifies parking maneuvers based on a variety of parameters, such as drive position changes, steering angles and speed.

In the future, the system will also be able use the information from the ultrasound sensors or the camera to recognize free parking spaces while driving. It will calculate the number of free parking spaces on the side of the road based on statistical models that consider factors such as the time of day. The service shows the driver the probability of finding a free parking spot in real time, making it easier to find a spot, particularly in city centers.

Model car course: car-to-x services and swarm intelligence in 1:8 scale
Audi isn’t just researching car-to-x communication, data sharing, swarm intelligence and piloted driving on the road, it is also doing it in 1:8 scale. The company has created the Audi Autonomous Driving Cup for just this purpose. As part of TechDay Connectivity, Audi is using these model cars to demonstrate traffic sign information, hazard information and on street parking.

The plastic body of the blue Audi Q5 miniature conceals a huge amount of technology that makes piloted driving possible. The high-tech model cars are powered by an electric motor that accelerates them to speeds as high as 40 km/h (24.9 mph). The main sensor for monitoring the surroundings is a color camera with depth mapping. As with the production cars, it detects the road surface, traffic signs, obstructions and other road users in front of the model cars. It is supported by ten ultrasound sensors: five at the front,
three at the rear and one on each side. Its large coverage range of two to 400 centimeters (0.8 to 157.5 in) enables the precise detection of the surroundings, even at high speed. An acceleration sensor registers changes of direction by the model cars and, like all other systems, sends this information in real time to the central on-board computer with a high-speed quad-core processor. The on-board computer is in contact with the laptop at the side of the track via Wi-Fi, very similar to how cars from Audi are connected to the cloud server via the cellular phone network.

The self-driving model car detects important information, such as a traffic obstacle, and enters this in a real-time map. The server then sends this as an early warning to a following car, which can then pass the hazard zone safely and easily. Audi’s model car course demonstrates the advantages of car-to-x communication. Audi will continue to refine typical applications, such as traffic sign information and hazard information familiar from its production cars, while also tapping the potential of HERE.

The car-to-x test car fleet: testing of connectivity and data sharing
Before Audi turns a new car or a new technology over to its customers, the function is tested under real-world conditions. To test connectivity and data sharing, 70 cars belonging to Audi managers were on the road throughout Germany from mid-2015 to mid-2016 as part of a pilot project. For the most part, the technology used in this pDw (from the German for personal company car) fleet was production solutions.

After 630,000 test kilometers (391,463.9 mi), more than six billion data sets are awaiting analysis. From the roughly 850 signals from the controllers in the car, the system was able to derive approximately 500 messages per second and send them encrypted and anonymized to the Audi IT data center via the cellular phone network. The back-end software that processes, stores and analyzes the data was developed in-house by Audi. Audi is therefore able to react quickly and flexibly to variations in the data volume.

One objective of the field test was to be able to better evaluate and optimize the characteristics of the Audi models in real-world use. At the same time, Audi gleaned valuable experience with the collection, transfer, storage and analysis of large volumes of data like those that will be needed in the connected traffic world. Appropriately conditioned, the data from the pilot project can be evaluated and used in a variety of ways.

Among the information polled during the field test were the GPS coordinates, speed and fuel consumption, as well as the radio station selected, cellular signal strength, the use of driver assistance functions like adaptive cruise control (ACC) and acceleration profiles. A look at the values for lateral acceleration revealed a conspicuous cluster at approximately - 2.6 m/s2and + 2.6 m/s2. This corresponds exactly to what according to studies is lateral acceleration that drivers find to be pleasant. These types of insights will enable Audi to configure its driver assistance systems even better in the future and to give piloted cars a more natural character.

With the insights gleaned from the pDw fleet data, the Audi developers are now able to make even more precise predictions about what is happening on the road and how road users behave. For customers, this will mean greater safety, comfort and efficiency in the future.

The piloted cars that Audi is developing must be capable of navigating down to the centimeter. The company HERE, in which Audi holds a stake, generates the digital map required to do this: the HERE HD Live Map.

AUDI AG joined a consortium with the BMW Group and Daimler AG at the end of 2015 to purchase the HERE maps database from the Nokia Corporation – a strategic step. HERE is one of the leading software companies for digital navigation maps and makes location-based services available for nearly 200 countries. 80 percent of all cars with integrated navigation systems currently on the road in Europe and North America use maps from HERE.

The central project of the Berlin-based company is the HERE HD Live Map, which forms the basis for the piloted driving of the future. The new data platform no longer contains any static, purely two-dimensional navigation maps that must be updated periodically via software updates or displays only a few real-time services via select online functions (such as real-time traffic information). The HERE HD Live Map describes the traffic space as a three-dimensional model with unprecedented precision. It is accurate down to the centimeter rather than the meter, and dynamic rather than static.
And it is extremely well connected. It uses roughly 80,000 different sources worldwide to continuously update its map material.

The HERE HD Live Map has three layers: The first, the HD Map, contains a static digital image of the environment. Guardrails, traffic lights, street signs, curbs and similar fixed objects are the reference points on which the self-driving cars of the future can orient down to a centimeter. The HD Map also integrates a database with information about hotels, businesses and restaurants.

The most important data for the HD Map are provided by roughly 200 HERE “True Cars” that drive the roads. A rotating LiDar unit (Light Detection and Ranging) is mounted on their roofs. The cloud of points generated by the car is used to create a 360-degree image of the environment extending outward by up to 80 meters (262.5 ft) and upward to 30 meters (98.4 ft).

The second layer of the HERE HD Live Map is called Live Roads. This is a dynamic layer that provides updated information in near real-time about such things as construction zones, accidents, rescue operations, black ice or fog. Live Roads content comes from numerous sources, but primarily from the sensors of participating cars. The intelligent swarm generates comprehensive, always-current information about the traffic, such as green waves in city traffic, changing speed limits and free parking spots.

The third layer has to do with humanized driving. Future piloted cars learn from the HERE data pool how the owner behaved in a certain situation resembling the current one. This query enables the car to adjust its behavior to the habits and expectations of the owner.

The HERE HD Live Map is split up into square tiles measuring two kilometers (1.2 mi) on each side. This allows the immense volume of data to be broken down into manageable portions. Updates within a tile are in the kilobyte range. The data are hosted in the cloud on a HERE back-end; a vast majority of the transfers to and from the cars are via the cellular phone network. Today’s LTE standard already offers a lot of possibilities here, but future solutions promise substantially higher data rates and the faster establishment of connections.

The HERE HD Live Map is still under construction, yet partial functions are already being used by many connected cars in North America and Western Europe. For Audi customers, the map makes demanding driver assistance functions such as the traffic jam assist and the predictive efficiency assistant even more precise and powerful. The new car-to-x services traffic sign information and hazard information will also migrated to the HERE HD Live Map in the future.

Audi, BMW and Daimler regard the HERE, map service, which employs some 6,500 people worldwide, to be an independent, continuously extensible and updatable platform. Whether carmaker or supplier, technology company or service provider: HERE is accessible to all. Cities can also use the new HERE HD Live Map to optimize traffic routing and flow.