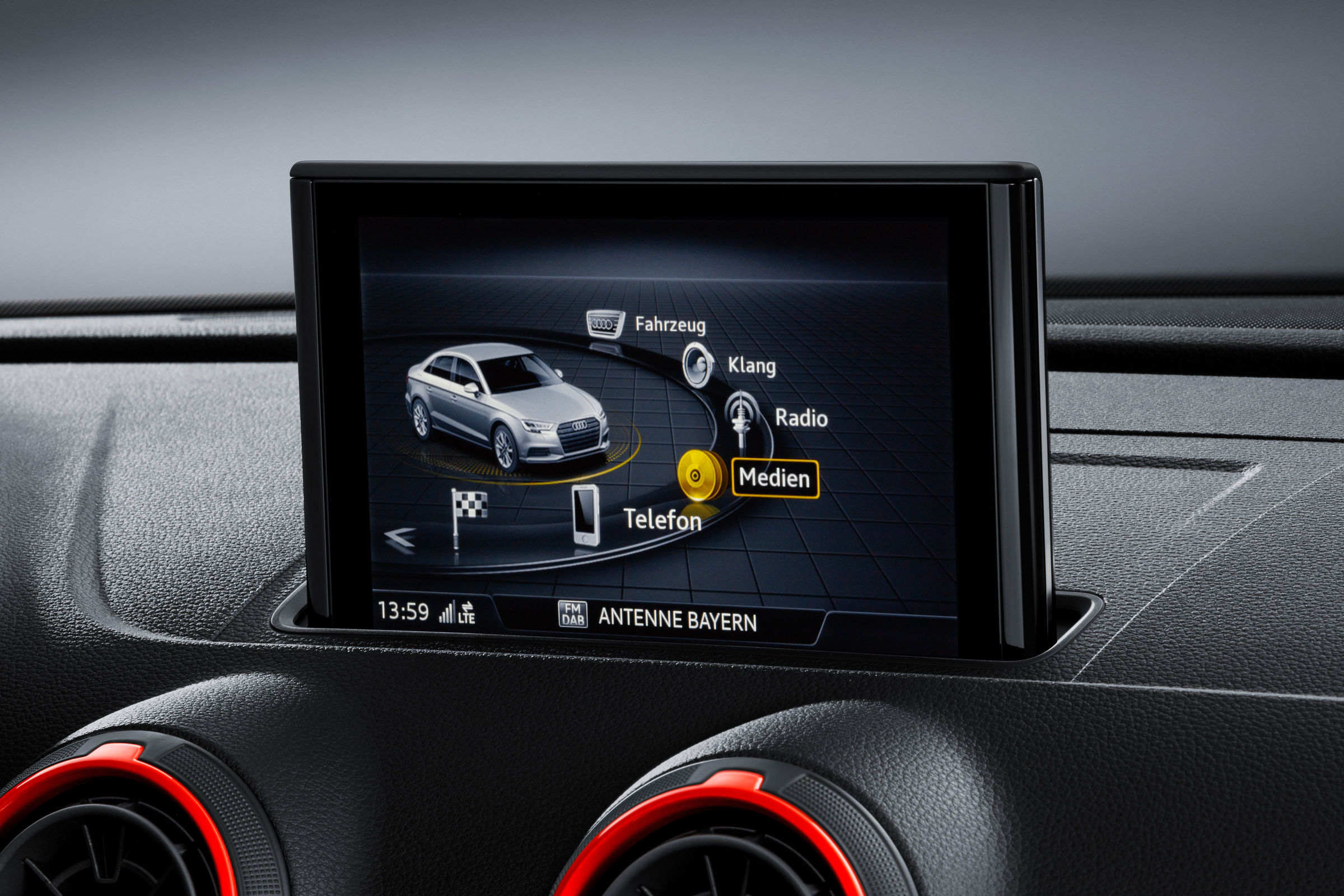 The Audi RS 3* uses the second-generation modular infotainment platform (MIB). Its MMX board has a Tegra 30 processor from joint-venture partner NVIDIA. Together with a special 3D graphics program, the quad-core chip from the Tegra 3 series handles all online, media, voice control, navigation and phone functions. With a clock frequency over one gigahertz and a powerful graphics card, it performs up to eight billion computations per second.

The infotainment offering for the RS 3 is of a modular design. MMI radio plus is standard equipment. It has eight loudspeakers, an SDXC card reader, an AUX connection, an MP3-capable CD drive as well as a Bluetooth interface for audio streaming and hands-free telephony.

The optional MMI navigation also includes a navigation function, another memory card reader, a USB interface with charging function and an LTE module for connecting the RS 3 to the Internet. The integrated Wi-Fi hotspot enables passengers to surf the web using their tablet, smartphone, etc. The MMI navigation also provides access to the voice control system of the smartphone, displays e-mails and reads them aloud.

MMI navigation plus with MMI touch tops the range. Beyond the scope of the MMI navigation, it additionally offers 10 GB of flash memory for media storage, a DVD drive and up to five free navigation updates. The top-of-the-range infotainment system works closely with many of the assistance and safety systems.

Customers who opt for MMI navigation or MMI navigation plus can use the diverse range of online services provided by Audi connect. They include amongst other things travel, parking and traffic information, access to Twitter and your e-mail inbox, as well as navigation with Google Earth and Google Street View. Drivers can also call up weather information and fuel prices. The advantages of Audi connect: services are displayed on the MMI screen in the car and are operated via the multifunction steering wheel, the rotary/push-button control or by voice command. This lets drivers continue to devote their full attention to what is happening on the road. Data is transmitted via the new Audi connect SIM, a SIM card permanently installed in the vehicle. The accompanying data flat rate covers the charges for the Audi connect services. Furthermore, the SIM card allows roaming in most European countries.

The free Audi MMI connect app offers many other functions in addition to the Audi connect services. The calendar on a smartphone can be displayed on the screen in the vehicle using the app. The driver can use the meeting location as a navigation destination and save the telephone number of a caller as a contact. The app allows Wi-Fi access to innumerable music and audio book titles via the Aupeo! and Napster services. Destinations from Google Maps and entries from the “Travel” service can be transferred from your smartphone to your car’s navigation system using the app. Also, customers can send a navigation destination from any app to the RS 3 via the “Destination Sharing” service. They simply use the “Share” function and transfer the related data to the Audi MMI connect app. Then the navigation system can navigate to the destination.

An MP3 player, USB storage medium or a smartphone can be connected with the MMI using Audi music interface. The screen in the car plays back music stored on the mobile device – sorted as desired according to artists, albums, tracks or genres. The Audi smartphone interface integrates selected apps into the car using Android Auto and Apple CarPlay. This includes, amongst other things, applications for telephony, navigation and streaming services which appear in a separate MMI menu.

All terms marked in the text are explained in detail in the technology lexicon at www.audi-mediacenter.com/en/technology-lexicon