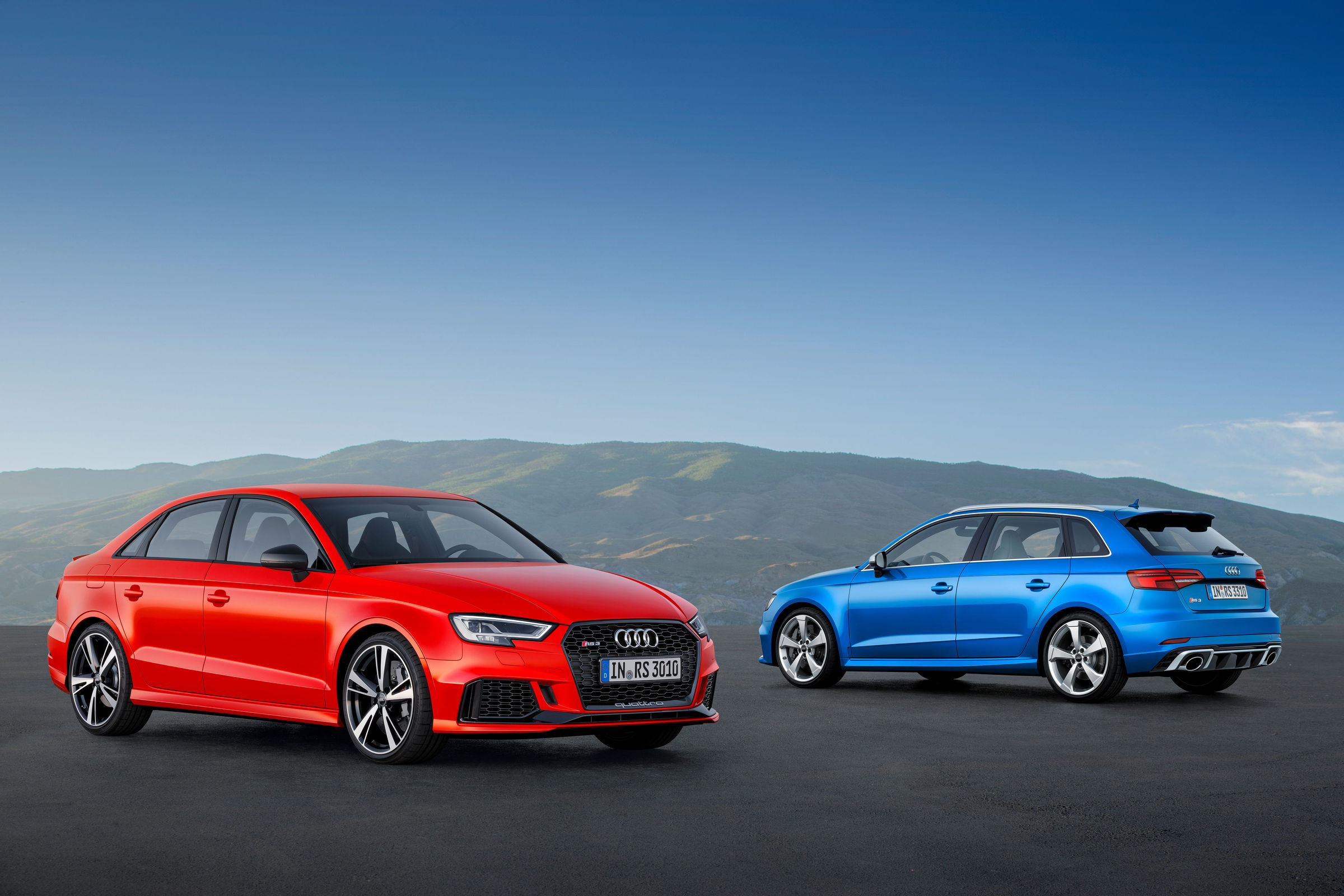 With their high-tech suspension, the new five-cylinder engine and a sharper look the Audi RS 3 Sedan* and the Audi RS 3 Sportback* are at the top of their class.
RS-specific details in the interior and the unmatched sound of the 2.5 TFSI engine complete the emotional driving experience.

Five-cylinder engines are a great tradition at Audi. In the 1980s they made a decisive contribution to furthering the success of the brand both in motor sports and on the road. After a break of many years, they made a comeback in 2009 when the 2.5 TFSI was fitted in the Audi TT RS. In 2011, the first generation of the RS 3 Sportback followed, in 2013 the RS Q3 and in 2015 the second edition of the RS 3 Sportback.

The RS 3 Sportback has now been modified considerably. It is now joined by the new RS 3 Sedan with which the brand is expanding its offering at an international level.
It is the first compact Audi Sedan to bear the RS label as well as being the first to feature a transversely-mounted five-cylinder engine. The pioneer of this design was the Audi A3 clubsport quattro concept study from 2014.

“The five-cylinder engine is a legendary element of our company’s DNA,” says
Stephan Winkelmann, Managing Director of Audi Sport GmbH. “Now, with 400 hp,
it will take up pole position worldwide – and not only in the RS 3 Sportback but also
in the RS 3 Sedan. Both models will offer our customers an attractive entry into the RS world.”

Show Album
Benedikt Still
Spokesperson Audi e-tron, Audi e-tron S, Audi Q4 e-tron, Electric Engines, Battery Technology, Charging / Infrastructure
Phone +49 841 89 89615
Mobile +49 152 57718307
Send Email
Audi RS 3 Sedan and RS 3 Sportback – a dynamic duo
294 kW (400 hp) output, from 0 to 100 km/h (0 to 62.1 mph) in 4.1 seconds, up to 280 km/h (174.0 mph) top speed – the Audi RS 3 Sedan and the Audi RS 3 Sportback stand for outstanding performance. An unmistakable sound accompanies the explosive tractive power of the new five-cylinder engine.
Learn more
Facts and figures
Audi RS 3 Sportback and Audi RS 3 Sedan - At a glance
Learn more
Engine
Since 2010, the 2.5 TFSI has been voted “International Engine of the Year” in its class for seven consecutive years. Now, Audi presents a new version of the successful power unit.
Learn more
Drivetrain
The seven-speed S tronic is standard on the RS 3 Sedan and the RS 3 Sportback. The lower gears of the compact dual-clutch transmission are dynamically short whilst the seventh gear has a long ratio to reduce fuel consumption. A heat exchanger controls the temperature of the transmission oil whilst a new angle drive at the prop shaft saves two kilograms (4.4 lb).
Learn more
Suspension
The multi-plate clutch management is integrated into the Audi drive select dynamic handling system. It allows the driver to choose between the comfort, auto, dynamic and individual modes.
Learn more
Body
The body of the RS 3 is extremely rigid, impact-resistant, quiet on the road and light. An acoustic windshield comes as standard. Further measures reduce interior noise even at high speeds, such as wheel housing shells made of non-woven material.
Learn more
Exterior design
The sporty character of the RS 3 Sedan and the RS 3 Sportback is visible at first glance: the front, sides and rear boast new, striking design details.
Learn more
Interior
Distinctive lines, clear ergonomics and high-quality craftsmanship – the dark-toned interior of the compact RS models captivates with an atmosphere of cultivated dynamism. It welcomes the driver and passengers with illuminated door sills bearing the RS 3 logos as a standard feature.
Learn more
Controls and displays
The flat hierarchies and intelligently linked context menus make operation of the RS 3 models intuitive and ergonomic. The driver can reach often used functions in only a few steps.
Learn more
Infotainment and Audi connect
The Audi RS 3 uses the second-generation modular infotainment platform (MIB). Its MMX board has a Tegra 30 processor from joint-venture partner NVIDIA. Together with a special 3D graphics program, the quad-core chip from the Tegra 3 series handles all online, media, voice control, navigation and phone functions.
Learn more
Driver assistance systems and equipment
An extensive selection of driver assistance systems provide for safety and comfort. New to the range is traffic jam assist which operates in conjunction with adaptive cruise control (ACC) including Stop&Go function.
Learn more