Audi e-tron FE04: The new generation of the championship-winning car

How can the race car be made even better in which Lucas di Grassi has won the championship and that has earned the team seven trophies for podium finishes in eleven races? With experience, the concentrated know-how of Audi and partner Schaeffler, plus a lot of attention to detail.

The Audi e-tron FE04 for the fourth season is a true single-seater race car and the new generation of Lucas di Grassi’s championship-winning car. While in the first Formula E season in 2014/2015 completely identical electric race cars were used, the teams and manufacturers, since the 2015/2016 season, have been allowed to develop the entire powertrain themselves, consisting of the motor, transmission and parts of the suspension as well as the respective software.

The combination of the motor and transmission, which Audi and technology partner Schaeffler have jointly developed, is the car’s centerpiece. The engineers primarily focused on designing the motor-generator unit (MGU) for even greater efficiency. As a result, acceleration out of corners in particular is enhanced.

Similar as in the DTM, technical changes following the homologation of the race cars, which is performed once a year is no longer permitted. During the season, the engineers and drivers primarily endeavor to extract the optimum from the existing package and to perfectly adapt the car to the respective city street circuit. The software which in Formula E makes all the difference particularly in terms of energy management offers the greatest scope in this respect.

Power to the Audi e-tron FE04 is supplied by a battery weighing 200 kilograms that Williams Advanced Engineering has developed and that is identical for all cars. The lithium-ion battery has a capacity of 34 kWh of which 28 kWh may be used. It sits between the driver’s seat and the powertrain.

Unique to Formula E are the profiled all-weather specification tires from Audi’s long-term partner Michelin which have a close reference to the production versions.

To transmit the power to the wheels, Audi Sport ABT Schaeffler in the new season is using a high-efficiency transmission with one instead of the previous three gears. A central display provides all the key information on the condition of the MGU, the system temperatures, which are particularly important with an electrically operated race car, and the current charge state of the battery.

Like in Formula 1, the driver sits in a carbon fiber monocoque complying with the latest FIA safety standards. Two roll bars and CFRP crash structures at the front, rear and sides provide maximum safety. The minimum weight of a Formula E race car is 880 kilograms (including the driver). The electric race car accelerates from 0 to 100 km/h in 3.5 seconds. Top speed on the city street circuits is about 225 km/h.

The Audi e-tron FE04 is the final evolution of the first Formula E era. In the fifth season that will start in fall/winter of 2018, a completely new design of a specification chassis will be used that will radically differ from all single-seater cars known to date. The battery to be used then will have twice the capacity of the current one so that the car change currently required will no longer be necessary and the drivers will contest the race in only one car. 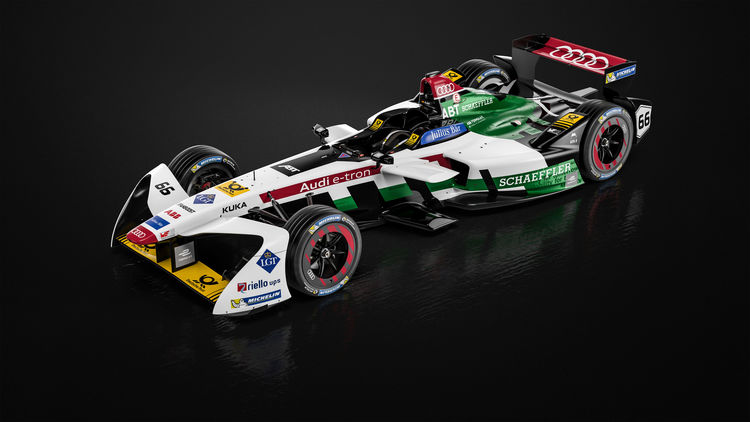