Audi Hungaria: in the press shop 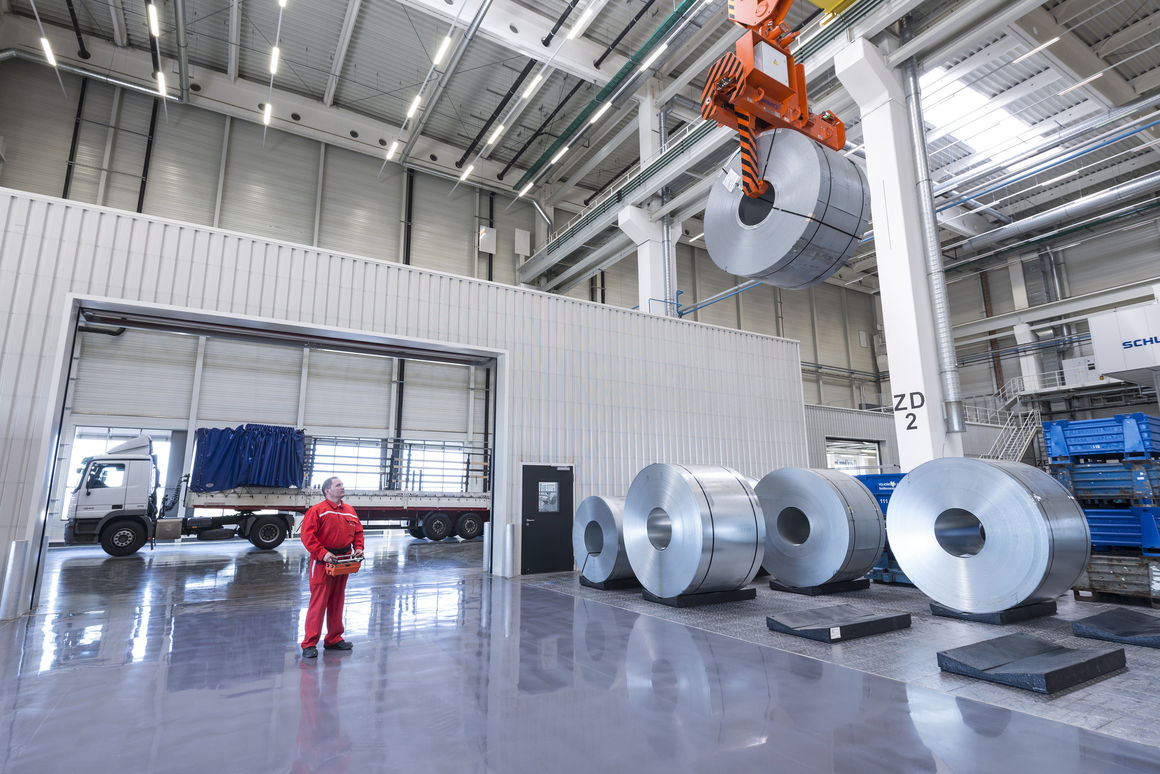 320 meters long, 58 meters wide and 17 meters high –Hall G 55, the press shop, isn’t the biggest building of the Audi Hungaria plant in Győr. But it’s something like the cornerstone of the production process – the section where the production of each individual car begins. The building’s foundations consist of a seamless slab of reinforced concrete 1.5 meters thick and eight meters below the surface of the ground. The slab is supported by 360 bored piles 15 meters long and 0.8 meters in diameter.

Up to 140 people work here on floor space of 26,000 square meters – working to the rhythm of the large press line with the name Servo-PXL, a mighty, constant pulse which beats up to 17 times a minute. The press shop’s equipment comprises Servo-PXL together with a spotting press and a strip-cutting machine. With its dimensions of 93 meters long, 22 meters wide and twelve meters high, Servo-PXL stands in the hall like a separate building with fluorescent yellow doors set into its gray walls. With a weight of 5,000 tons, Servo-PXL has a total closing pressure of 8,100 tons, divided into six individual presses. The first of them is the strongest, with 2,100 tons, and takes care of the first drawing of the blank sheet metal. The other presses, which are responsible for cutting and post-forming, share the remaining 6,000 tons.

Compared with the equipment of previous generations, Servo-PXL represents major progress, and is in use here for the first time at Audi. The most important feature is the drive system: 14 electric servo motors replace the central unit and its large oscillating mass. They are fitted to the head pieces of the six individual presses and have a rated power of 390 kilowatts. The speed at which they move the press slides downwards and brake them again can be freely and precisely adjusted to the requirements of the press tool that is currently in use.

When the slides are braked, the press recovers energy. Seven generator flywheels in the basement of the press shop save that energy for a few seconds and then return it to drive the machine. Another strength of the new Servo-PXL is the rapid changing of tools, which weigh up to 60 tons and are transported by cranes suspended below the hall’s ceiling. Tool changing is fully automated and takes just three minutes.

The press line can produce up to 24,000 parts per working day at a rate of up to 17 strokes per minute. Between the strokes, the machinery performs a mechanical ballet of extreme complexity, speed and precision: Robots with a high degree of freedom, so-called crossbar feeders, fetch the sheet metal from the stacks, spray it with lubricant, position it in an optical centering station, place it in the tool and retrieve it from there. Per stroke, they undergo approximately 70,000 individual switching processes.

Audi has extremely high quality standards for each sheet-metal part of the A3 Sedan: Dimension tolerances are in the range of tenths of millimeters and surface tolerances are measured in hundredths of millimeters. Although Servo-PXL works independently with the aid of highly detailed software, the machine operators still have a high degree of responsibility – they monitor the mechanical processes, observe the forming process and react to any error reports from the exit lines. There, trained employees check the finished parts by sight and by touch with the aid of special illumination.

Ultramodern technologies make a valuable contribution towards Audi precision. Optical measuring techniques already examine the pressed parts for cracks and other flaws and other technologies will be introduced soon. They include electromagnetic sensors and acoustic measuring systems inside the press line and so-called intelligent tools, one of Audi’s pioneering new developments. Sensors monitor whether the sheet metal is optimally drawn into the press; if not, the tool’s clamping devices regulate the equipment accordingly.

Material flow in the press shop operates as a closed system. When the strip-cutting machine cuts the blank sheet metal from the man-sized 25-ton steel and aluminum coils, it achieves a utilization rate of approximately 85 percent. A number of stamping processes result in the sheet-metal parts that are used inside the car bodies. The steel and aluminum offcuts produced by the strip-cutting machine and the press line are collected on conveyor belts in the basement and taken away for recycling.

PDF
Audi Hungaria: in the press shop
Download (81 KB)
Back to top