The electrification modular platform: new technologies with 12 and 48 volts 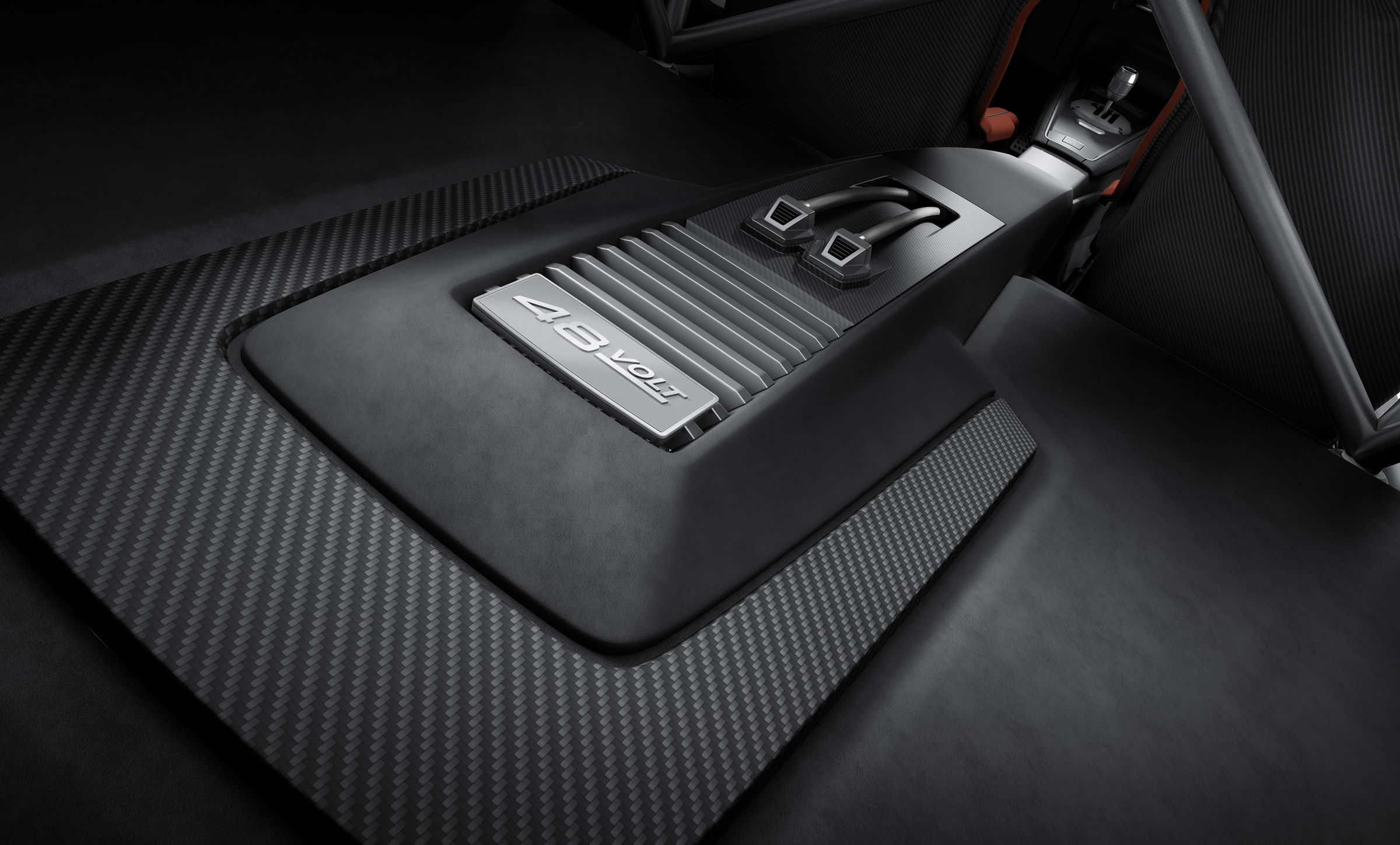 Audi is systematically driving forward the electrification of its cars – including below the new high-voltage models. The new mild hybrids are set to make inroads into the model range on a broad front – in ten years’ time, Audi aims to offer all new models with this technology, with the exception of the e-tron lineup. The current 12‑volt electrical system and, above all, the new 48‑volt system offer many ways of making driving even sportier, more comfortable and more efficient.

Mild hybrid for beginners: high drive efficiency based on 12 volts
Audi offers a tailor-made solution for each new electrified model. A very efficient mild hybrid can already be implemented with the existing 12‑volt electrical system. Its key components are a lithium-ion battery with 11 Ah capacity and a belt starter generator, which at the same time is used as a starter motor.

The belt starter generator paves the way for new functions. The start-stop phase can already begin at around 15 km/h (9.3 mph) residual speed. If the driver takes their foot off the accelerator at high speed, the car coasts for a short time with the engine switched off. With a maximum 5 kW the recuperation output is considerable –in addition, the generator can assist the combustion engine with up to 1 kW. As a result, the TDI or TFSI can be operated closer to its ideal load point. The belt starter generator based on 12 volts has the potential overall to reduce the fuel consumption by up to 0.4 liters per 100 kilometers (588.0 US mpg).

More power, more recuperation: the 48‑volt electrical system
This technology is even more compelling with the new 48‑volt subsidiary electrical system, which is about to enter volume production at Audi. The lithium-ion battery provides 10 Ah electrical capacity; the belt starter generator, however, produces 12 kW, translating into fuel savings of up to 0.7 liters per 100 kilometers (336.0 US mpg). With 48 volts, the same mild-hybrid functions can be implemented as with 12 volts, but to a greater extent – the coasting phase with the combustion engine switched off, for instance, can last up to 30 seconds.

Apart from hybridization, the 48‑volt electrical system, which Audi is pioneering within the Volkswagen Group, boasts many other advantages. Its higher voltage allows for much smaller cable-cross sections, which also reduces the weight of the cable harness along with power dissipation. Above all, though, it can provide four times as much power as the 12‑volt electrical system and, as such, opens up the prospect of innovative, compelling technologies for the driveline and suspension.

Instead of the turbine wheel, the electrically driven compressor incorporates a small electric motor, which accelerates the compressor wheel to very high speeds in around 250 milliseconds with approximately 7 kW of power. The motor always develops its power without any perceptible delay whether while moving off or accelerating at low speeds. The electrically driven compressor eliminates the need for constant downshifting, keeping engine speeds low. Sporty drivers will appreciate the passing power and immediate delivery of power when exiting a curve.

Brand-new solutions: 48‑volt systems in the suspension
When it comes to the suspension too, the higher voltage facilitates compelling technologies. Audi will shortly be launching the first of these as part of volume production – the electromechanical active roll stabilization (EAWS). Here a compact electric motor with a three-stage planetary gearbox separates the two halves of the stabilizer from each other.

With a comfort-oriented driving style, the two halves are decoupled from each other, resulting in excellent ride comfort. In response to sportier gear changes, the tubes are interconnected and twisted against each other. With each electric motor developing 1.5 kW of peak output, they produce anything up to 1,200 Nm (885.1 lb‑ft) of torque.

The effect is taut, sporty handling: the car rolls less into the bends, the tendency to understeer reduced, lateral acceleration increased. The front and rear stabilizer can be adjusted independently of each other. As such, the control unit can make the handling even sportier on request.

Another of the system’s strengths is recuperation. If the wheels on one axle are deflected to greatly differing extents on bumps in the road, they excite the stabilizer – its motor now operates as a generator and converts each impulse into electrical energy. Thanks to this effect, the electromechanical active roll stabilization only has to develop minimal power overall. With moderate gear changes on a very bumpy road, the power requirements can even be virtually zero.

Compared with conventional hydraulically switched stabilizers, the 48‑volt-based system from Audi offers major advantages. It can develop more power, it works faster and more efficiently, and it is activated even at low speeds. The absence of oil also means the electromechanical active roll stabilization is maintenance-free and environmentally friendly.

In terms of the basic principle, eROT is not unlike the electromechanical active roll stabilization: a strong lever arm absorbs the forces that are induced on the wheel carrier with a sporty driving style and on a bumpy road. Via a series of gears, it transmits this force to an electric motor, which converts it into electricity.

The recuperation output is 150 watts on average on German roads – from 3 watts on a freshly tarmacked freeway to 613 watts on a poorly maintained country road. This corresponds to a CO2 saving of three grams per kilometer (4.8 g/mi) under customer driving conditions.

The eROT system responds quickly and with minimal inertia. It is used to recover energy and acts as an actively controllable shock absorber. In doing so, it eliminates the mutual independence of the rebound and compression stage, which limits the effectiveness of modern hydraulic dampers. Thanks to eROT, Audi is able to tailor the compression stage to comfortable-soft characteristics without having to make compromises with the desired rebound damping setting. The system’s horizontal position constitutes another advantage – the elimination of the upright dampers frees up additional installation space.

Gradual rollout: the electrification modular platform from Audi
In around ten years’ time, Audi will equip all new models – with the exception of the e-tron range based on high voltage – with the new mild-hybridization features. A rollout plan maps out the desired route. In 2016, the 48‑volt subsidiary electrical system will be launched in a new model, which will also feature the electrically driven compressor and the electromechanical active roll stabilization on-board. The increased voltage promotes above all dynamism and driving pleasure. The generator still works on the basis of 12 volts, a DC/DC converter interconnects the 12‑volt electrical system and the 48‑volt subsidiary electrical system.

The next expansion stage is planned for 2017 when the mild hybrid will be rolled out on the basis of 48 volts. The 12‑volt system is now linked via a powerful DC/DC converter to the 48‑volt system, which is then promoted to become the main electrical system and is powered by a 48‑volt belt starter generator. The requisite lithium-ion battery is roughly as big as a large lead battery. Air cooling is sufficient for thermal management. The mild hybrid based on 12 volts is set to follow at around the same time.

Over the medium term, Audi intends to convert auxiliaries such as pumps and superchargers for the engine, transmission and air conditioning system to 48 volts. Today they are driven hydraulically or by the combustion engine – however, if they are operated electrically, they can be controlled even more effectively according to demand; they would also be lighter and more compact. The same applies to large static convenience consumers such as window heating or sound systems. Small consumers such as control units or lights will, however, remain in the 12‑volt system well into the future.