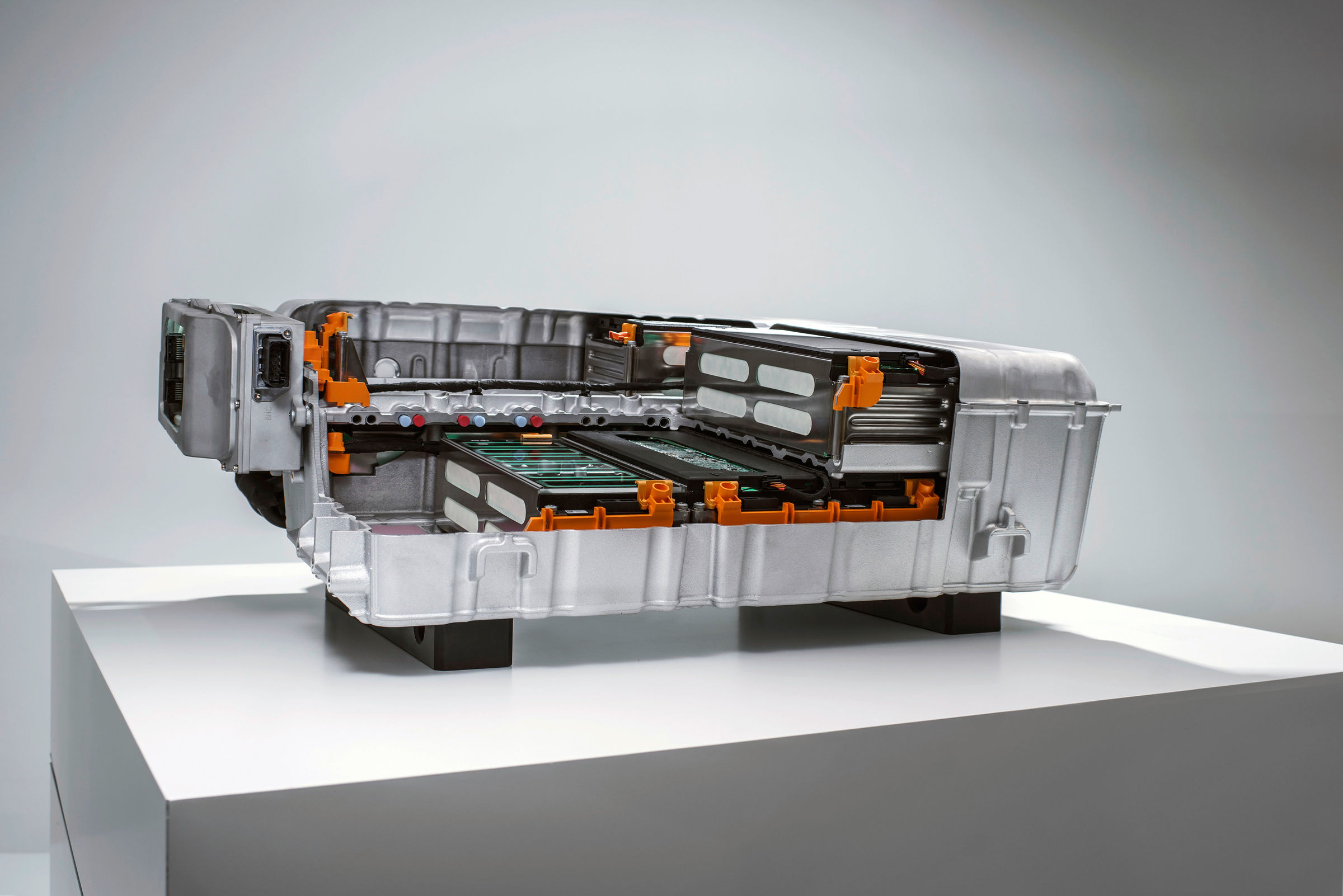 Audi covers every key area in developing high-voltage batteries for its plug-in hybrid models and electric cars. Its expertise spans cell development, the arranging of the cells into modules, the operating strategies during driving operation, and use of the battery after the end of its service life in the car. The emphasis is on lithium-ion battery systems, which are put together using a flexible, modular concept.

At the competence center for high-voltage battery technology at Gaimersheim, just outside the main­ plant in Ingolstadt, Audi specialists are working on the traction batteries for future electric­ mobility. Whether for a plug-in hybrid car (PHEV, plug-in-electric vehicle) or a purely electric car, the battery structure without exception follows a uniform modular concept. This gives the Company the flexibility to respond swiftly to future requirements in the marketplace. The modular strategy also means the batteries can be used across all models and brands throughout the entire Volkswagen Group.

The module as central factor
The decisive factor for Audi is the battery module – a sturdy cuboid aluminum housing slightly smaller than a shoe box. The module weighs around 13 kilograms (28.7 lb) and within the battery system is mounted on a cooling plate through which cooling fluid circulates. It can accommodate three types of cell: round cells such as those used in the R8 e-tron 2.0*, prismatic cells – each of them about half the size of a paperback book – or long, flat pouch cells.

The prismatic cells have separate aluminum housings, so they are more robust than pouch cells. Their outer skin is made from aluminum-coated polymer and this in turn brings weight advantages. In terms of the performance of the battery system, the individual strengths and weaknesses of both concepts cancel each other out. The two suppliers with which Audi works have each specialized in a particular design.

The strength that prismatic and pouch cells have in common is the dense packaging. They both use 75 percent of the available volume, a much higher figure than round cells (50 percent), which also require more complex contacting.

Round cells are generally only suitable for all-electric vehicles; while they store a high amount of energy compared to the other designs, their power output is comparatively low.

Pouch cells and prismatic cells are more versatile. With minor changes to their exterior dimensions, they can be configured specifically for maximum power output, maximum energy or a combination of both, making them ideal for a plug-in hybrid vehicle. The key criterion is the coating thickness of the electrodes – the thinner these are, the greater the contact surface between electrolyte and active material; the resulting high charge transfer assures a corresponding performance density. Conversely, high coating thicknesses for the electrodes produce a high energy density.

Worldwide, the development of lithium-ion battery technology is advancing very rapidly. Over the past three years Audi has succeeded in increasing the current capacity­ of prismatic cells by 50 percent – from 25 ampere hours per cell to 37 Ah. Energy density has increased by a similar degree. Pouch cells now achieve up to 550 watt hours per liter of volume, and Audi expects them to reach about 750 Wh/l by 2025. An important incidental effect is that battery costs have fallen by around half in the past five years. That is making electric mobility affordable for more and more customers.

Development in the competence center
Audi is helping to push forward developments with meticulous attention to detail. Together with Volkswagen Group Research, the brand with the four rings is also getting involved in long-term projects that are investigating innovative cell chemistry. At the special high-voltage competence center near Ingolstadt, the focus is on the development of complete systems: packaging, cooling, validation and, in partnership with body development, integration into the automobile. It is above all working on the battery system’s rigidity and its behavior in a crash situation – Audi is testing loads at up to 150 times the force of gravity.

Design is opening up interesting fresh scope specifically for future electric cars. Audi gave a foretaste of this at the 2015 Frankfurt Motor Show. In the Audi e-tron quattro concept, the 95 kWh battery takes the form of a large, flat block beneath the passenger compartment, ideally positioned in terms of center of gravity between the axles. There is no longer a center tunnel in the body. This model points the way forward – as a precursor of the all-electric-drive sport SUV from Audi.

New lease of life for used batteries
Audi designs its batteries for high service lives of more than 150,000 kilometers (93,205.7 miles) and at least eight years in operation. Even then, these batteries still possess a large portion of their nominal capacity – too high for them to be recycled. Under a venture with the motto “From Road to Grid”, the Company is therefore currently working on a concept to convert old batteries into stationary energy stores.

A first test setup located near Ingolstadt recently started supplying the grid. A container for four traction batteries of various sizes works in tandem with a photovoltaic system that is capable of supplying up to 20 kW of power on sunny days. A second container houses the connection and control technology: Its power electronics convert the direct current from the batteries into alternating current at a standard voltage of 400 V. When the batteries have been run down to ten percent of their capacity, they are sent for recycling.

Audi’s innovative storage platforms are suitable as a power source for quick-charging stations with an output of more than 250 kW. Alternatively they can serve as buffers for renewables such as wind and solar power – whether as part of the grid or as home installations. Audi has already drawn up plans for larger systems with a capacity of around 500 kWh.