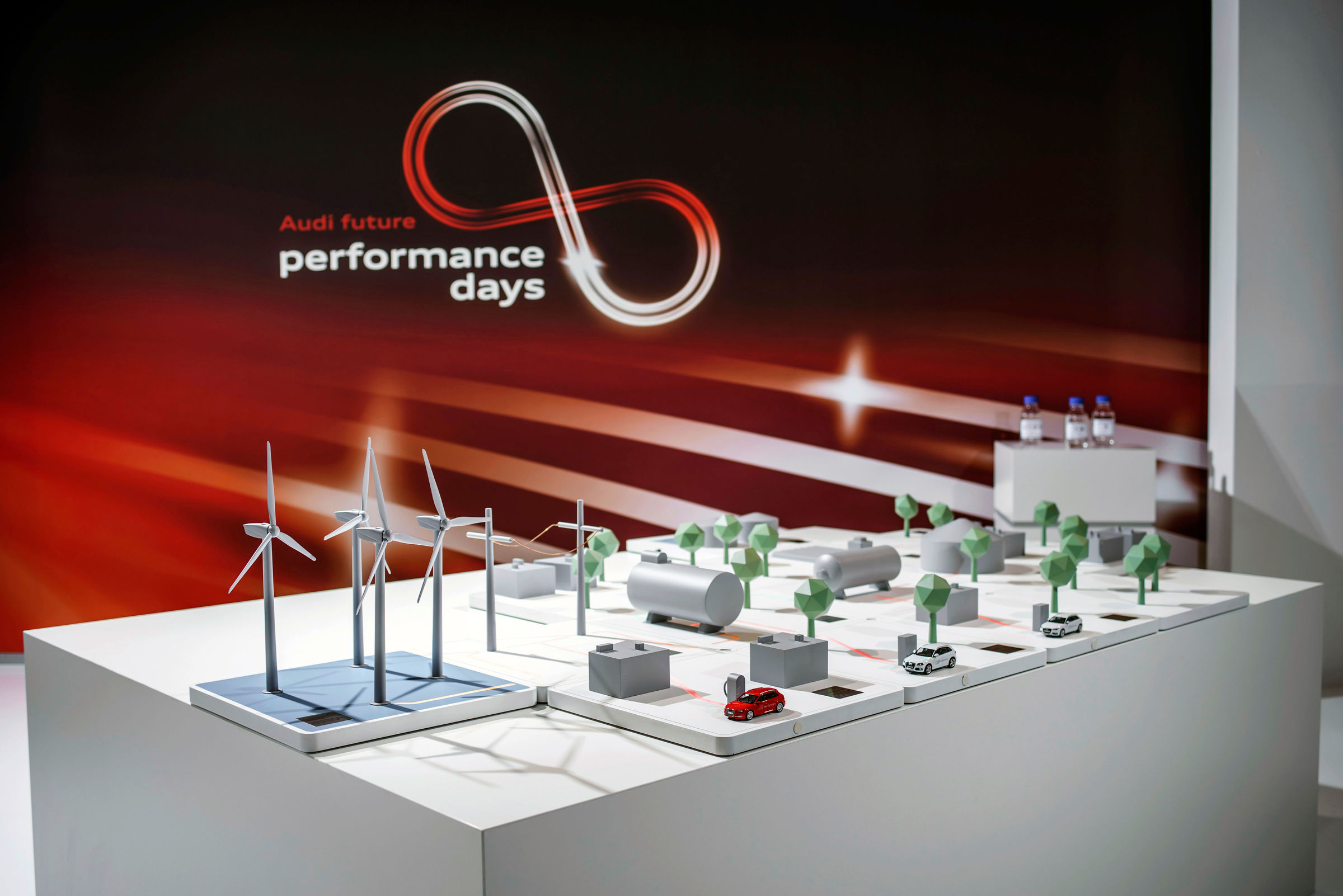 Audi is designing the mobility of the future in which environmentally friendly produced electricity plays a key role. It not only powers the electric motors in the e-tron models, it is also the powerhouse behind certain Audi e‑fuels: climate-friendly alternative fuels for combustion engines. Audi produces fuels that do not depend on petroleum, that bind as much CO₂ during their production as they emit during combustion. They are known as Audi e‑gas, Audi e‑diesel, Audi e‑gasoline and Audi e‑ethanol. With Audi e‑gas, Audi already offers A3 g-tron* customers climate-neutral mobility.

In 2013, the Audi e‑gas plant in Werlte (Emsland) came on stream. With help from wind power, the Audi e‑gas, a synthetic methane, is produced from water and carbon dioxide. The process is performed in two major process steps: electrolysis and methanation. In the first step, the plant uses renewably generated electricity to split water into hydrogen and oxygen. Over the medium term, the hydrogen can also be used to power fuel-cell vehicles such as the Audi A7 Sportback h-tron quattro*.

The absence of any universal hydrogen infrastructure at present means the focus at the moment is on the second process step: the hydrogen is then reacted with CO2, which comes from a nearby waste biogas plant, to produce synthetic methane, or Audi e‑gas. Chemically, it is nearly identical to fossil-based natural gas, so it can be distributed throughout Germany over the natural gas grid to CNG filling stations and be used in Audi g-tron models.

New e-gas model: the Audi A4 Avant g-tron
Every year the Audi e‑gas plant produces up to 1,000 tons of e‑gas, binding up to 2,800 tons of CO2 in the process. This quantity enables 1,500 Audi g-tron models to drive 15,000 kilometers (9,320.6 mi) each a year with no carbon footprint. The company offers the Audi e-gas fuel card which can be used as a means of payment. This fuel card is also used as an accounting tool – Audi pumps the amount of gas refueled by customers as e-gas back into the natural gas grid.

The Audi A3 Sportback g-tron, which went on sale in early 2014, will be joined by the new A4 Avant g-tron* at the end of 2016. The usage of e‑gas is also ongoing in other markets.

The Audi e‑gas plant in Werlte demonstrates just how well the power-to-gas concept – the conversion of electricity into fuel – works. It now already has several imitators in the German power industry, with other major players running their own power-to-gas plants. These allow the increasingly frequent surpluses of renewable energy to be stored, thus making a valuable contribution to the energy transition.

At the same time, the Audi e‑gas plant helps stabilize the public power grid in northern Germany, which is supplied with large amounts of wind energy. As a series of tests conducted by electricity grid operator TenneT TSO GmbH showed, it is able to react very quickly and reliably and iron out fluctuations in the power grid. As a result, it has been qualified to take part in the secondary balancing energy market, which the grid operators run to stabilize the power grid.

Audi is convinced of the potential of the power-to-gas principle and is cooperating with other partners from the energy sector to cover the increasing demand for fuel. One of these cooperation partners is the Thüga group, a network of municipal power utilities. It also runs a power-to-gas plant in Frankfurt am Main, which is testing, among other things, the addition of hydrogen to the natural gas grid.

e‑gas by biological means: Audi partner Viessmann
Viessmann GmbH is another Audi partner. The heating specialist from Allendorf in the state of Hesse provides its expertise from the electricity and gas sector and is operating the first power-to-gas plant involving biological methanation in Germany. Another example is the cleantech company Electrochea in Copenhagen, which aims to bring biological methanation into the megawatt class. The conversion of hydrogen into methane takes place in both instances not as in Werlte by means of a thermochemical, catalytic process, but in a biological process: special microorganisms are fed by the hydrogen and CO2, producing the Audi e‑gas in the process.

Power-to-liquid: Audi e‑diesel
A production plant for Audi e-diesel started pilot operation in Dresden-Reick at the end of 2014. Here too, the Audi e‑fuels formula applies: fuel production binds exactly the same amount of CO2 that is emitted again when running the car. The local energy technology company sunfire is Audi’s project partner here. The plant works in accordance with the power‑to‑liquid principle (PtL) and utilizes green electricity as the primary energy. The raw materials are water and carbon dioxide, which a biogas plant provides. Part of the CO2 will be extracted in future from the ambient air by means of direct‑air‑capturing – a technology of Audi’s Zurich-based partner Climeworks.

The efficiency of the overall process at around 70 percent is very high compared with other processes for manufacturing synthetic liquid fuels. In the first step, water heated up to form steam is broken down into hydrogen and oxygen by means of high-temperature electrolysis. In two further steps, the hydrogen reacts with the CO2 in synthesis reactors – again under pressure and at high temperature. The result is known as blue crude, which – similar to crude oil – can be refined to create the end product Aud  e‑diesel. The synthetic fuel is free from sulfur and aromatics; its high cetane number makes it readily ignitable.

Global Bioenergies has built a demonstration plant in Leuna that will begin producing larger quantities of iso-octane in 2016. Over the medium term, the project partners aim to modify the process so that it requires no biomass, instead requiring just water, hydrogen from renewable sources, CO2 and sunlight.

High yield per square meter: Audi e-ethanol
Another project is underway in Hobbs (New Mexico, USA). Here Audi has been running with the U.S. biotechnology company Joule a research plant for producing high-purity e-ethanol and e-diesel since 2012. Special microorganisms use sunlight, carbon dioxide, and salt or brackish water to produce liquid fuels. The end product of this bio-technologically optimized photosynthesis process comes in the form of alkanes – important components of diesel fuel and ethanol. Even today the specific yields per area of the demonstration plant are eight times higher than with the production of bioethanol from corn, which is widespread in the United States, and still three times higher than with sugar-beet based bioethanol, which is mainly produced in Brazil. Further increases are expected.