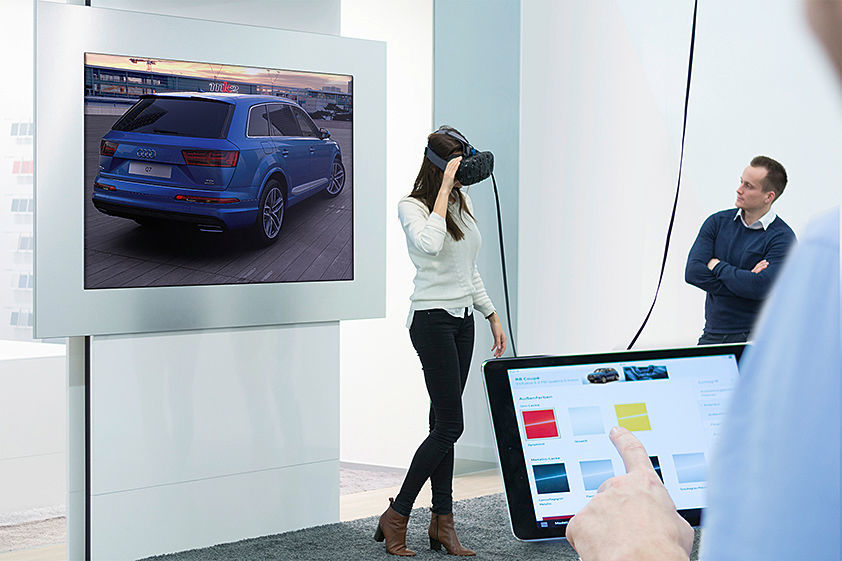 Audi presented the Audi VR experience for the first time at the North American International Auto Show in Detroit in early 2015. At a car dealership, a sales advisor can configure any Audi model in the device so that customers can virtually experience their dream vehicles wearing a VR (Virtual Reality) headset – with unique and remarkable authenticity and all details.

In addition, the use of today’s VR technology also opens up other fascinating possibilities. Customers can experience their vehicles in a variety of different environments or virtually dive into specific parts of the vehicle and explore their technical design.

The device set has a base station designed by Audi Design. Along with the VR headset, this base station also contains a remote control unit and specially developed headphones from Bang & Olufsen that can replicate typical vehicle sounds as well as the vehicle’s sound system.

In its development, Audi made a very significant investment in the implementation of a graphics engine optimized for virtual reality. This graphics engine was developed by the British specialist Zerolight, and it delivers a high level of visual quality while displaying a very smooth flow of images. Here, the complex data models of the vehicles are output stereoscopically in the VR headset at a rate of 90 frames per second and with a latency time of less than 20 ms.

The system has now been successfully tested internationally, and starting in the second quarter of this year, it will be rolled out in Audi City showrooms and shortly thereafter in the first select dealerships around the globe.

Audi is also working on extending the system to a higher level that utilizes HTC Vive VR headset and associated tracking system on a 5 x 5 meter (16.4 x 16.4 ft) surface which, in turn, enables an even more natural experience of the virtual vehicles. The observer can move around the car or sit on the driver’s or front passenger’s seat and take in all of the visual details of the vehicle interior. This large version of Audi VR experience will make its debut at the 2016 CES, and it will be used in Audi City showrooms sometime this year.

The brand will be the first automaker to introduce such a highly developed VR system which will offer considerable added value to customers as they make their purchasing decision. The system is fully integrated into the IT system environment at Audi, and it will be maintained at the latest vehicle data configurations online.

Equipment, data and prices specified in this document refer to the model range offered in Germany. Subject to change without notice.