The Future of the Automobile Is Fully Electric and Intelligently Connected 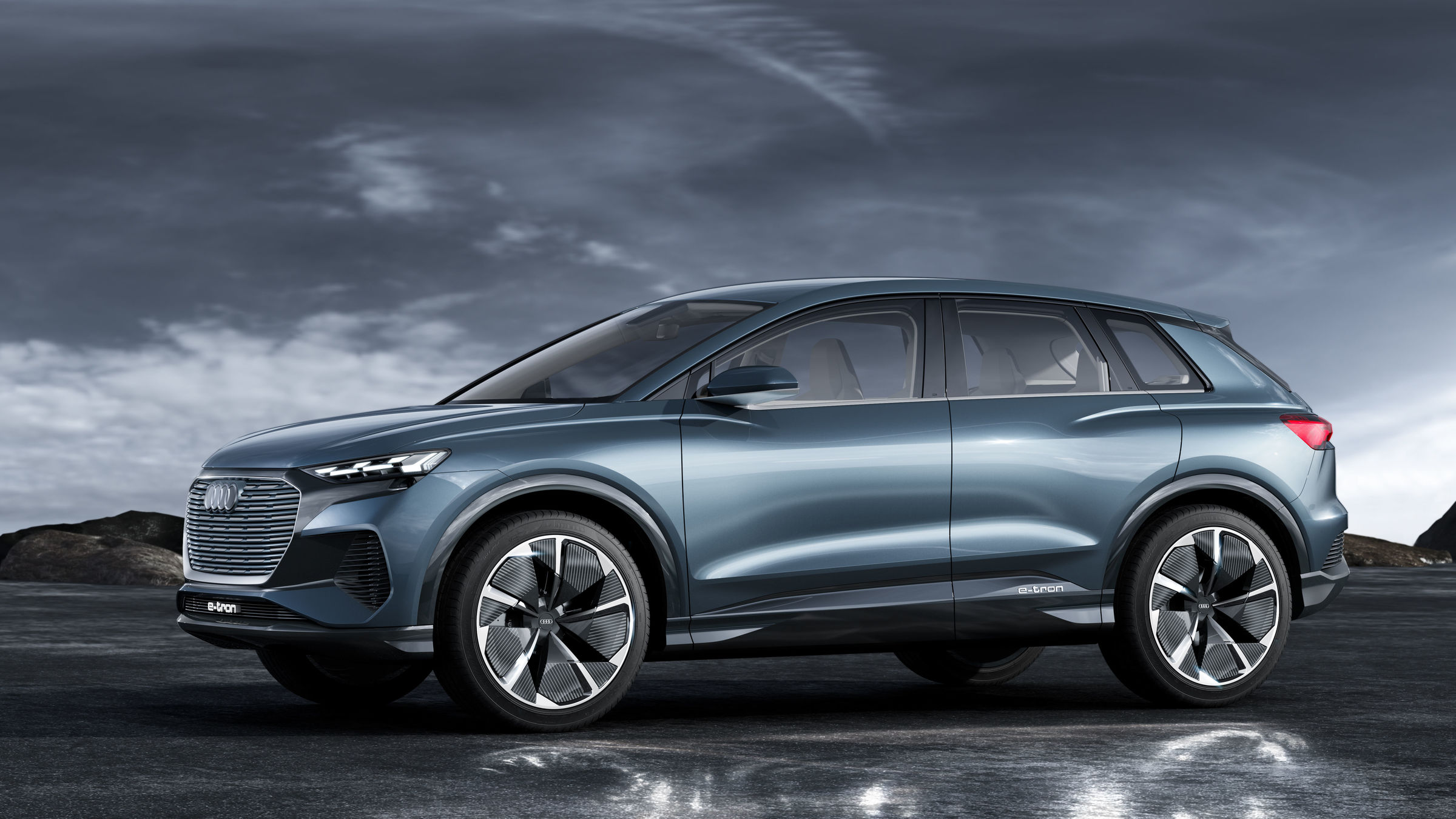 With an extensive product portfolio, Audi will demonstrate at CES that the future of the automobile is not only fully electric but also intelligently connected. The spectrum ranges from battery-electric cars like the Audi e-tron Sportback* (combined electric power consumption in kWh/100 km**: 26.0–21.9 (WLTP); 22.7–20.6 (NEDC); combined CO2 emissions in g/km: 0) all the way to future visions, embodied by the Audi AI:ME. Customers will be able to see and experience the importance of the digitalization in the display and operating concepts. All electrified Audi models are equipped with the Audi virtual cockpit and a large MMI monitor. The touchscreen in the near-production-level show car Audi Q4 e-tron concept has a 12.3-inch diagonal. The control panels on the steering wheel spokes are also designed as touch elements, and a large head-up display with augmented reality functions complements the display and operating concept.

Upon request from the customer, the Audi e-tron Sportback* features digital innovations, one highlight being its digital matrix LED headlights. With these, Audi is presenting a novelty on the world market in large-scale production. Broken down into minute pixels, their light can illuminate the road in high resolution. The design is based on a technology abbreviated as DMD (digital micromirror device) and is also used in many video projectors. The light can be controlled with great precision, facilities safe lane centering on narrow roads or in construction areas, and displays the vehicle’s position in the lane.

Without the digitalization, the sustainable mobility of the future could not be implemented. This also applies to electric drives and their management, which largely takes place outside of the customer’s field of perception. Small controllers monitor the modules of the lithium-ion battery and a battery management controller (BMC) coordinates the overall system, which can store a gross amount of 95 kWh of energy (86.5 kWh net) in the Audi e-tron Sportback*. The control units for the drive and suspension interact in a completely new way in the fully electric models: Great potential is unlocked with regard to energy recovery during deceleration (recuperation) or electric all-wheel drive.

Audi is transitioning into a system provider of electric mobility. The Plug & Charge function was designed for drivers who want to charge their fully electric Audi e-tron* (combined electric power consumption in kWh/100 km: 26.6–22.4 (WLTP); 24.3–21.0 (NEDC)**; combined CO2 emissions in g/km: 0) or Audi e-tron Sportback* at a smart and convenient high-power charging station while on the road. This function will be launched in cooperation with fast charging provider Ionity in Europe in 2020. With Plug & Charge, the digital personal charging contract is on board in the Audi e-tron*: The car authenticates itself at charging terminals using state-of-the-art cryptographic procedures, after which it is authorized – a card is no longer needed. Invoicing is performed via the customer account of the e-tron Charging Service.

Audi offers various solutions for charging at home. The e-tron charging system connect is particularly interesting for European customers, as it allows a charging capacity of up to 11 kW. Together with a home energy management system (HEMS), the charging system offers various intelligent functions: Charging with the maximum available power while taking into account the demands of the other household consumers. This ensures that the connection is not overloaded. In addition, the customer can specify individual charging profiles and charge the car when power is less expensive by storing their electricity contract in myAudi. If the house is fitted with a photovoltaic system, the Audi e-tron* can be charged using self-generated solar power. The HEMS takes the forecast phases of sunshine into account here.

Together with the product improvement of the A4, Audi introduced a new configuration level of the modular infotainment platform, the MIB 3, in its new vehicle models. Its main processor computes ten times faster than that of the MIB 2. The MIB 3 works together with a communication box, another new feature, which is located in a different place. It performs all connectivity tasks and integrates the Wi-Fi hotspot for the passengers’ mobile devices.

The MIB 3 will be included in many other Audi models in mid-2020. It is the core of all infotainment devices. As from the middle of 2020, it will offer new route guidance functions: The navigation system localizes the car on highways and some urban intersections with a new level of precision. A zoom function shows the driver in which lane they are driving. Predictions on the development of the traffic situation provide route guidance with a new degree of flexibility. The fully electric Audi e-tron models in particular benefit from this new level of technology, as it further increases the performance of the

e-tron route planner. It now calculates a globally optimized route that also includes predictions about traffic jams and the availability of charging stations. On long drives, the route planner calculates the charging times and stages of the journey between the charging points such that the driver arrives at the destination as quickly as possible. This is why it often suggests two short charging stops rather than one long one.

The online services from Audi connect complement the route guidance in all Audi models. Highlights include the navigation with Google Earth™, traffic information online, and the hybrid radio that switches between terrestrial and online stations independently. The Car-to-X services, which are called Vehicle-to-Infrastructure in the USA, are particularly interesting here. They connect the car with other vehicles and the infrastructure, for example to find free parking spaces at the side of the road or to use the traffic light communication system to surf the green wave. Audi already introduced the “traffic light information” system in the USA in 2016. More than 7,700 intersections are currently connected to the system, 1,700 of which in the capital city of Washington, D.C., and the surrounding area. The offer is also being rolled out step by step in European cities. In Germany, Ingolstadt has already been connected to the system, and further cities will follow in 2020.

Audi already integrated Amazon’s voice service Alexa in the MMI operating system in 2018. The driver can use it to place orders and get information on many current events. Alexa streams music or audiobooks and offers access to more than 80,000 Alexa skills via voice recognition, for example information on the driver’s shopping list, the weather, or news. The smart home control allows users to lock doors in the house, adjust the lighting and close the garage door from within the car.

On the North American market, the connect portfolio is complemented by special services. One of these is the SiriusXM 360L satellite radio with online capability that plays music and information from various categories in the car without advertisements. The Audi e-tron* and the upcoming e-tron Sportback* are equipped with the Integrated Toll Module (ITM) as standard, which allows users, once they have registered, to drive on toll roads without stopping.

Current Audi models can already be personalized today: Up to six users and one guest can store their preferred settings in personal profiles. Depending on the model, the individualization comprises up to 400 parameters, ranging from frequently selected destinations in the navigation system to the electric seat adjustment. The car identifies the respective user on the basis of the physical car key or the Audi connect key on the smartphone when the car is unlocked and activates their individual profile.

New Audi models will be fitted with the next configuration level of the personalization in mid-2020. Here, the stored data will no longer be saved just in the car, like today, but also in the customer’s myAudi account, i.e. in the cloud. There is also another way the car will “identify” its user in the future: The vehicle’s antenna will contact the myAudi app on the driver’s smartphone via the Bluetooth Low Energy radio standard. The car will then greet the driver with the personal profile picture they stored.

In cooperation with the Fraunhofer Institute for Integrated Circuits IIS and Sony, Audi is now working on the next configuration level, real 3D sound. At CES 2020, visitors can hear it in an Audi Q8 at the Fraunhofer IIS booth.

The 3D sound in today’s cars is generated by conventional stereo audio signals that are prepared by an upmix algorithm, based on Audi’s in-house development, soundCUBE. It distributes different signal components to the loudspeakers such that the person listening experiences the music three-dimensionally. The real 3D sound is based on an entirely new procedure: Real, discreet 3D sound arrives at the audio system as an input signal and is distributed according to the existing loudspeakers. This way, the potential of an advanced sound system really comes into its own for the first time. The transmission format used is 360 Reality Audio, which was initiated by Sony and is based on the open standard
MPEG-H 3D Audio of the Fraunhofer Institute.

During production, musicians and artists have numerous possibilities to create a 360 degree sound field: “Audio objects” such as vocals, choirs, and instruments can be positioned anywhere. The processor in the playback device sends the individual streams to the loudspeakers just like they were recorded. To do this, it uses meta information that is transmitted together with the music data. This creates a spherical sound field, a novel, fascinating acoustic experience that is played back exactly as the artist intended during production.

Sony presented the new music format at the official launch of 360 Reality Audio in October 2019 in New York. The first streaming offers in 360 Reality Audio are available from Amazon Music HD, Deezer, nugs.net, and TIDAL in the USA and also in Europe.

* The collective consumption values of all models named and available on the German market can be found in the list provided at the end of this MediaInfo.
** Information on fuel/electric power consumption and CO2 emissions given in ranges depend on the equipment selected for the vehicle

The equipment, data, and prices specified in this document refer to the model range offered in Germany. Subject to change without notice; errors and omissions excepted.